The Navajo Nation is continuing to map its own future, and ASU is playing a key support role.

In 1998, the Navajo Nation passed the Local Government Act, which decentralized community planning for the Navajos and gave significant governing authority to the nation’s local jurisdictions, called chapters. However, the legislation came with its own set of problems. 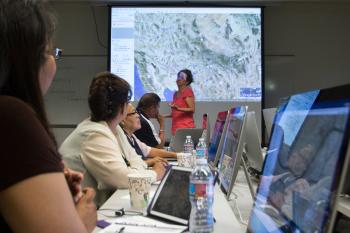 The Navajo Nation hired outside planners and consultants, but the results were not effective, possessed little creativity and the plans mostly sat on a shelf for years.

After conducting a two-year study, ASU’s School of Geographical Sciences and Urban Planning concluded that a new planning approach was needed. Furthermore, a training program was developed to provide the latest approaches and techniques for the tribal community's own regional plans.

That training is happening right now for the first time over a 12-day session at the Tempe campus, ending on June 26.

“We spent a lot of time and money on consultants, and they didn’t necessarily do very good work,” said Elerina Yazzie, one of 16 Navajo Nation planners participating in the training program. “To me, all they did was copy and paste their plans for every single chapter. They didn’t do the community work that was mandated, and they weren’t familiar with the land or people. It was a failure.”

David Pijawka, a professor of planning in the School of Geographical Sciences and Urban Planning and director of the Community Planning Training Program for the Navajo Nation, said the mistakes of the past can be corrected through proper guidance and use of the latest Geographic Information Systems and planning technologies.

“What we’re doing is bringing Navajo planners the decision-making tools they need to be effective and showing them the most advanced training possible,” Pijawka said. “Many people attending the program see the importance of what they’re doing here and will be going back to their chapters and transforming their communities. It’s groundbreaking.”

Approximately 320,000 people identify themselves as Navajos, and the Navajo Nation covers land that is roughly the size of West Virginia.

Planner Faye Nez, who oversees 29 chapters near Gallup, New Mexico, said the training program has been invaluable and hopes that others will follow in her footsteps.

“Development means growth, and often that means getting a formal education,” Nez said. “It’s very hard to come from one culture and enter another. I know there are a lot of Navajo students with great minds, and they’re finally going to get organized training.”

For senior planner Louis Shepard, the program is an opportunity for dialogue and continued learning opportunities.

“I’m learning about methods and models that are currently being used and the planning environment, principles and applications,” Shepard said. “Hearing the different perspectives on the rural versus urban settings and how to address the needs of the people has been particularly helpful to me.”

The immune system's CD8 T cells patrol the bloodstream, on guard for suspicious activity. But that protection is a double-edged sword: Too few T cells are ineffective; too many, lethal. New ASU research aims to understand that balance.

Like acutely sensitive watchmen, CD8 T cells patrol the bloodstream, ever on guard for suspicious activity.

These cytotoxic – or lethal – cells provide an indispensible line of defense against infection, but it can be a double-edged sword. Their numbers must be held in a delicate balance: Too few will fail to ward off infection, while too many can be lethal. 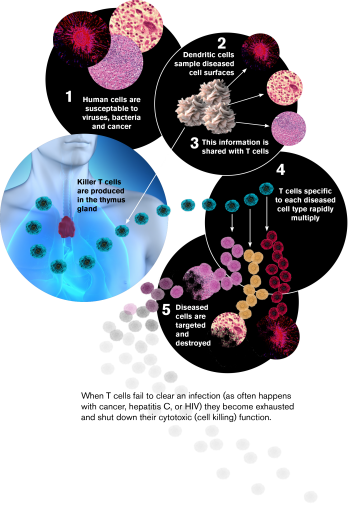 In a multi-stage reaction to infection, the body uses "killer" T cells to target and destroy infection. When T cells fail to clear an infection (as often happens with cancer, hepatitis C or HIV), they become exhausted and shut down their cell-killing function. Download the image to see an enlarged version. Photo by: Michael Northrop Download Full Image

Indeed, as Joseph Blattman, a researcher at Arizona State University’s Biodesign Institute, pointed out: “Usually, you don’t feel sick from what you’re infected with; you feel sick because of your body’s response to infection.”

In the case of deadly diseases like Ebola, the immune system’s aggressive efforts to kill virally infected cells often help kill the patient.

Blattman and his colleagues are working on a new project to better understand the subtle biological dance that determines whether CD8 T cells will be ineffective, protective or pathologic in response to viral infection. The research may yield vital clues for the design of better vaccines and new treatments for persistent infections, during which CD8 T cells often shut down their activity in a process known as T-cell exhaustion. (Joseph Blattman is also assistant professor with the School of Life Sciences at ASU's College of Liberal Arts and Science.)

Under a five-year, $1.9 million grant from the National Institute of Allergy and Infectious Diseases, Blattman, principle investigator Rustom Antia and Ira Longini will use mathematical modeling verified by experiment to explore the interplay between infectious pathogens and CD8 T-cell response.

(Antia and Longini are researchers at the Department of Biology, Emory University; and the Center for Statistics and Quantitative Infectious Diseases, Emerging Pathogens Institute at the University of Florida, respectively.)

T cells – a type of white blood cell produced in the thymus – form the centerpiece of the body’s adaptive immune system. Like sentinels, they circulate in the bloodstream, vigilantly prowling for infections or cellular abnormalities. While T cells exist in several varieties, two primary forms are critical: helper T cells and killer T cells.

While killer T cells are essential ingredients in the body’s ability to combat a broad range of bacterial and viral pathogens, they fail to provide adequate protection from certain persistent viral infections, such as HIV or hepatitis C.  Thus far, traditional vaccines, which often provide protection through stimulation of T-cell response, fail to engage immune cells effectively to fight these illnesses.

One problem is that CD8 T cells that are unsuccessful at clearing an infection within a certain period act to limit their collateral damage to healthy cells, shutting down hunter-killer activity – a process known as T-cell exhaustion. Having failed to erradicate a hostile invader, the body essentially acts to cut its losses.

The process is similar to the termination of ineffective chemotherapy against cancer.

“The job of the immune system is to make our bodies an inhospitable place for something that infects us – but not so inhospitable that we can’t survive,” Blattman said.

Before a new class of vaccine candidates or therapies can be designed to address currently intractable infections, a much keener understanding of T-cell response to viral invasion will be needed.

The problems involved are too complex, however, to address purely by intuitive or qualitative means. The current project seeks to quantify T-cell response under specific scenarios, developing models for T-cell behavior as it relates to persistent viral infection.

During the course of viral infection, populations of viruses and responding T cells can change more than a thousand-fold in magnitude. Non-linear interactions between pathogens, cells and molecules of the immune response result in intricate dynamics, often difficult to grasp without careful mathematical modeling.

Typically, populations of T cells exponentially expand in numbers in response to infection, and then subsequently contract.

“The hard part,” Blattman said,  “is really understanding why most T cells die off, why some survive and, ultimately, how many are needed to protect from infections.”

Mathematical models are powerful tools for investigating the complex, non-linear interplay between an organism’s immune system and the pathogens that infect it. For the current project, the researchers seek to quantify the response of CD8 T cells to a specific, well-studied viral pathogen known as lymphocytic choriomeningitis virus (LCMV), which commonly infects mice.

The point of exhaustion

LCMV has been the focus of intense and extended study. Many central principles of immune function have been uncovered through the exploration of this model virus.

Blattman explained that the LCMV system is an ideal platform for modeling the parameters of protection and pathology. Precise numbers and properties of T cells can be tracked as well as the details of the host environment, allowing for fine-grained modeling of viral infection and subsequent response.

LCMV is easy to handle and grow in the laboratory. Most importantly, LCMV can naturally infect both mice and humans, improving the ability of mathematical models to more accurately portray infection processes in people.

The research project will focus on developing enhanced models to quantify key variables guiding the infection-response interaction, including proliferation rates of T cells in vivo, death rates of infected cells and the release of cell signaling proteins known as cytokines, which act to suppress viral infection.

T-cell exhaustion will be explored, with particular attention to the multi-stage course of shutdown, during which T cells successively lose function, beginning with proliferation, followed by cytokine release, production of tumor necrosis factor and finally, cytotoxicity.

Resulting insights may then be applied to developing techniques to improve viral clearance while avoiding increased pathology.

The project will also explore the combined use of antiviral drugs and specific antibodies to reactivate T-cell response, testing these approaches in the LCMV experimental system.