A new partnership between Arizona State University and the U.S. Agency for International Development (USAID) will position ASU graduate students to confront the most pressing issues faced by the developing world.

Through USAID’s Global Development Lab, a Research and Innovation (R&I) Fellowships program will be established at ASU to engage the next generation of development professionals. The program will serve as a model for knowledge exchange, supporting top-tier graduate students as they work with USAID and host organizations throughout the world.

The ASU R&I Fellowships program will be announced at a student engagement session from 2:30 p.m. to 4 p.m., Oct. 6, in the University Club Heritage Room on the Tempe campus. In addition to providing an overview of the program, including eligibility and application information, the session will offer attendees the opportunity to engage with USAID representatives.

"Together with the U.S. Global Development Lab of USAID, we are partnering with Arizona State University and other institutions to address global hunger and malnutrition, prevent maternal and child deaths, and increase access to clean energy and healthy water,” says USAID Administrator Rajiv Shah. “These fellowships will support the best and brightest minds capable of creating innovative solutions to improve or save the lives of more than 200 million people around the world in the next five years."

The ASU R&I Fellowships program will be administered by ASU’s Julie Ann Wrigley Global Institute of Sustainability. Using its convening capacity and international visibility, the ASU Wrigley Institute will assemble a transdisciplinary cohort of exceptional fellows and faculty mentors.

In the program’s initial year, applicants must be enrolled in one of five selected pilot schools: the School of Sustainability, W. P. Carey School of Business, College of Public Programs, School of Life Sciences or Ira A. Fulton Schools of Engineering. In subsequent years, all graduate students interested in international development will be encouraged to apply.

Christopher Boone, dean of the School of Sustainability and the program’s contact, sees the partnership with USAID as one of many benefits.

“This partnership will provide USAID with the deep intellectual and community engagement expertise of ASU,” says Boone. “At the same time, it will provide graduate students with the opportunity to seek solutions to development challenges that they are genuinely passionate about while acquiring invaluable research experience and international connections.”

Online applications for the ASU R&I Fellowships program will be available beginning Monday, Oct. 6. Submissions must be received by Nov. 14.

Even as the United States’ role in global affairs has increasingly become a subject of national debate, the importance of the country’s international engagement in promoting security and economic development globally, nationally and locally cannot be underestimated, said Sen. John McCain, R-Ariz.

McCain was speaking at a panel discussion that focused on how America’s efforts abroad are directly linked to Arizona’s security and economic prosperity. Hosted by Arizona State University and the U.S. Global Leadership Coalition (USGLC), the discussion took place Oct. 6 inside the Memorial Union on ASU’s Tempe campus. 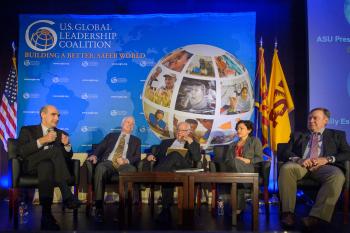 Like most states, Arizona benefits from the country’s global engagement. Last year, the state exported more than $19 billion in goods and services to foreign markets. More than 88 percent of Arizona companies that exported goods are small- or medium-sized businesses. Trade supported more than one in five jobs in the state, making international engagement a strategic issue for the state.

“Today’s young people are unwilling to accept the status quo as a model for their thinking; through science, culture and arts, they are trying to connect to the rest of the world,” said Crow. “They are deeply dedicated to a better world and community service, and we are able to facilitate that engagement through our partnerships with international players such as USAID and Intel.”

With the help of grants from the agency, ASU and USAID have partnered on a variety of global development efforts, including ones strengthening economic ties between Arizona and Mexico; facilitating adaptation to clean energy in 12 Pacific Islands and rural Guyana; promoting gender equality in Armenia; and raising awareness regarding national and international human trafficking. A joint project involving ASU, USAID and Intel to strengthen higher education – especially in engineering fields – and promote technology development in Vietnam received the U.S. Secretary of State’s 2012 Award for Corporate Excellence.

“Involving ASU in the engineering education project in Vietnam changed its trajectory,” said Esque. “Initially, we were bringing Vietnamese engineering students to the U.S. for training. Suggesting that sustainability be our focus, ASU encouraged us to train professors in Vietnam with help from ASU professors, creating the much-needed skillset and workforce within the local community.”

The panelists also discussed the need to raise awareness regarding the percentage of federal budget – one percent of the total amount – allocated to international affairs and its importance, especially in light of the spread of threats like Ebola and political turmoil in the Middle East, Ukraine and other countries. They underlined the importance of using U.S. foreign assistance as a tool to combat terrorism and conflict, and promote security.

“Creation of stability through social initiatives and economic development doesn’t just depend on USAID. It also depends on business organizations, such as Intel Corporation, that are creating opportunities within and outside of the U.S., and on the expertise and innovation taking place at higher education institutions such as ASU,” said Feierstein. “Leveraging these resources helps us turn portions of that one percent of the total federal budget into having a critical impact world-wide.”

A Global Innovators Showcase highlighting 25 innovative, local Arizona businesses and organizations engaged globally accompanied the event, which also featured remarks from Glenn Hamer, president and CEO of Arizona Chamber of Commerce and Industry, and Marty Martin, CEO of the non-profit Food for the Hungry. In a separate event on the Tempe campus, dignitaries from USAID also announced the establishment of a Research and Innovation Fellowships program through the agency’s Global Development Lab. The program will be administered by ASU’s Julie Ann Wrigley Global Institute of Sustainability and will enable graduate students at the university to work with the agency and host organizations across the world to address the world’s most pressing challenges.

The panelists said that while there will be individuals who are fearful of the country’s global efforts, engagement with the help of education, trade, innovation and technology will benefit the national and local economy.

“The highest level of creativity and productivity will be realized when we welcome change and adaptation,” said Crow. “To always be leading and bolster American exceptionalism, we need to adapt and change before others.”