What color is the sky?

If you answered “blue,” a trip to one of artist James Turrell’s Skyspaces might just change your mind. 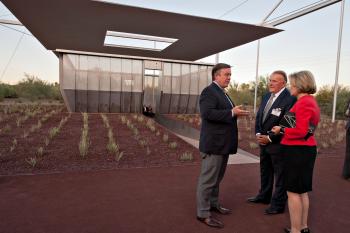 An internationally renowned artist who is best known for his ongoing Roden Crater project in northern Arizona, Turrell works with light and space to make art that affects the eye, body and mind, offering the public what critic David Pagel calls “a spa for consciousness.”

Turrell’s famed Skyspaces are contemplative, intimate architectural environments in which viewers are invited to experience light as an almost tangible presence.

With the unveiling of Air Apparent, a new Turrell Skyspace here at ASU, on the evening of Oct. 17, the university now has its own spa for consciousness.

Unlike the other Skyspaces in the area (there are two: one private, one at the Scottsdale Museum of Contemporary Art, open during museum hours), this work is open to the public “24/7,” as ASU President Michael Crow put it, as is the adjacent Diane and Bruce Halle Skyspace Garden, designed by landscape architect Christy Ten Eyck.

Air Apparent is located near the intersection of Rural and Terrace roads, just northeast of the new Interdisciplinary Science and Technology Building 4 (ISTB4), on the university’s Tempe campus.

Speaking at the dedication, ASU President Michael Crow noted that the placement of the new Skyspace near “three of the most sophisticated science facilities on Earth” was not an accident. Faculty and research staff in ISTB4 are renowned for designing instruments to enable scientific exploration of other worlds. In addition to complex labs, ISTB4 provides public outreach spaces on the first and second floor that invite visitors into the scientific and engineering challenges that invigorate studies of Earth and the universe.

Thanks to the Skyspace experience, Crow said, “if you allow yourself, you actually begin to get a glimpse of yourself and how you perceive and what you perceive.”

Crow thanked Bruce and Diane Halle for making the Skyspace and the adjacent garden possible, and for their commitment to ensuring that Arizona is a state in which art and beauty flourish.

“This has been a long time in coming,” Diane Halle said, “and no one is happier than I am.”

Adriene Jenik, director of the School of Art in the Herberger Institute for Design and the Arts, pointed out that Air Apparent has links to the ancient sites of the Hohokam as well as to 20th century artists like Josef Albers, and that it even connects us to the future, extending the field of neurophysiology. Like all masterpieces, Jenik said, the Skyspace has “an ability to evoke an experience that defies description.”

Architect Will Bruder, who had worked with Turrell on the SMoCA Skyspace as well, described Air Apparent as “an oasis in the desert,” and said that his job on the project was to “stretch the canvas and work on the frame” for Turrell, the artist. “I was the studio assistant,” Bruder joked.

After the dedication ceremony, guests descended the walkway into Air Apparent and took their seats on the polished black granite bench that runs around the inner perimeter of the mesh structure. The 45-foot-square ceiling plane, which seems to float above the space, is actually a quarter-inch thick steel plate weighing 32,000 pounds, with a hidden framework of structural steel members. At the center of the ceiling plane is a 15-foot square opening that literally frames the sky when viewed from below. A shallow groove at the top of the walls contains 480 LED color-changing light fixtures, each programmed by the artist to illuminate the canopy above during sunset and sunrise and to amplify the viewer's experiences of light, color and perception during twilight hours.

According to Bruder, the “choreography of the light” is different at dawn and at dusk, making for two very different experiences.

Gallery director Lisa Sette, who represents Turrell, said she believes Air Apparent will become “a destination for students, the community at large and art lovers from around the globe – as is so often the case with a James Turrell work.”

ASU's Kenja Hassan is being honored next month for her high commitment to civic involvement.

"There really isn’t a point in having institutions of higher learning, if learning isn’t applicable to people’s daily lives,” says Kenja Hassan, in a 2009 video on the New American University model in place at Arizona State University (see related video).

Hassan is an assistant director for ASU’s community outreach and relations, and she is being honored Nov. 1 by the Black Board of Directors Project for her work and "high commitment to civic involvement." 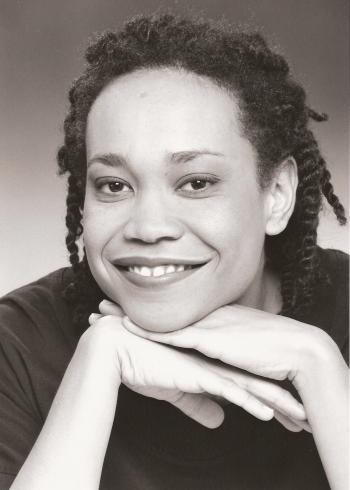 The recognition comes just one month after Hassan was featured as one of 12 “Diversity Champions” in the Sept. 28 edition of the Phoenix Business Journal. It was the first time the journal made this kind of recognition, Hassan says.

A Washington, D.C. native, Hassan came to ASU in 2000 with a keen understanding of the goals and mission of a university – how it can serve the state and world, produce better citizens who are more informed about the world, and grow communities.

She believes Arizona’s biggest strength is its diversity – the in migration of people from across the country, of all ages and backgrounds, and from all over the world.

“The university has an opportunity to look at the state as a microcosm,” says Hassan, who, in 2008, initiated an ASU policy publication, modeled after the National Urban League’s “State of Black America,” that looks closely at current statistics of Arizona’s minority communities and identifies areas of success and need. The publication, called State of Black Arizona, is a step toward starting a continued conversation and spurring focused research within African-American communities all over Arizona.

“My goal is to find meaningful ways for ASU to be engaged in communities around the state, and we are especially interested in communities where ASU hasn’t had a really strong presence in the past," Hassan says.

Hassan collaborated with ASU professor Kathryn Nakagawa and the Arizona Foundation for Women to organize SHE (Safety, Health, Economics and Education) Matters – a project aimed at fostering dialogue among the state’s nonprofit organizations to address what types of outreach programs target minority women – because, as Hassan says, the statistics for many minority women in Arizona show a lack of progress in certain key quality of life areas, such as health outcomes, educational attainment, and parity in earnings.

The thesis of SHE Matters is that when all women in Arizona are better off, then the state is better off too. "The state becomes more economically vital, more culturally vibrant, and more vigorous in its development," the organization's September 2012 report states. And nonprofits play a large role in helping advance this mission. Often, prejudice and perception affect some women's ability to move forward, Hassan says, and so the statewide support of ethnic minority women is therefore essential.

Being engaged in one's community is one of the most important parts of being a citizen, says Hassan, who next month will be awarded the Dr. Charles R. Campbell Outstanding Alumna Award at a special awards ceremony for the Black Board of Directors Project (BBODP). An advanced leadership program, the BBODP began in 1984 in Phoenix “to fill the void of Blacks and others on various corporate, charitable, and public policy-making boards and commissions at the local, state and national levels and other leadership positions,” as is stated on their website.

"I'm very excited to be recognized for civic involvement," she says. "I am committed to doing my part to improve lives in the state of Arizona, and I'm fortunate to have a job that encourages me to help Arizonans connect to ASU and to each other."