Photosynthesis is one of the fundamental processes of life on Earth. The evolutionary transition from anoxygenic (no oxygen produced) to oxygenic (oxygen-producing) photosynthesis resulted in the critical development of atmospheric oxygen in amounts large enough to allow the evolution of organisms that use oxygen, including plants and mammals.

One of the outstanding questions of the early Earth is how ancient organisms made this transition. A team of scientists from Arizona State University has moved us closer to understanding how this occurred, in a paper recently published in the Proceedings of the National Academy of Sciences. The paper, titled "Light-driven oxygen production from superoxide by manganese-binding bacterial reaction centers," is authored by James Allen, JoAnn Williams, Tien Le Olson, Aaron Tufts, Paul Oyala and Wei-Jen Lee, all from the Department of Chemistry and Biochemistry in ASU's College of Liberal Arts and Sciences. 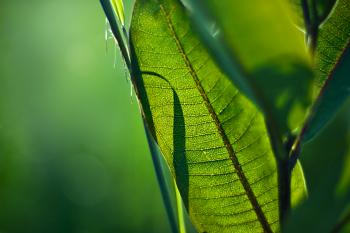 Plants and algae, as well as cyanobacteria, use photosynthesis to produce oxygen and “fuels,” the latter being oxidizable substances like carbohydrates and hydrogen. There are two pigment-protein complexes that orchestrate the primary reactions of light in oxygenic photosynthesis: photosystem I and photosystem II.

“In photosynthesis, the oxygen is produced at a special metal site containing four manganese and one calcium atom connected together as a metal cluster,” explains professor James Allen. “ This cluster is bound to the protein called photosystem II that provides a carefully controlled environment for the cluster.”

On illumination, two water molecules bound at the cluster are split into molecular oxygen and four protons.  Since water molecules are very stable, this process requires that the metal cluster be capable of efficiently performing very energetic reactions.

Allen, Williams and coworkers are trying to understand how a primitive anoxygenic organism that was capable of performing only simple low energy reactions could have evolved into oxygen-producing photosynthesis.

Although the mononuclear manganese cannot split water, it can react with reactive oxygen species to produce molecular oxygen. These results suggest that the evolution of photosynthesis might well have proceeded through intermediates that were capable of oxygen production and served until a protein with a bound manganese-calcium cluster evolved.

Without playoffs ahead, what do Sun Devil baseball fans have to look forward to?

Some might call this year for the Sun Devil's baseball team a wash. With no hope for a playoff birth, so far a less than satisfactory season and a recent drop in the NCAA polls losing their No. 14 seed, many say that this just isn't their year. With a current record of 16 and 11 and an eighth place ranking in the Pac-12, all hopes may be gone for a happy ending to the season. This looks to be the second time in 10 years, and the first time in Coach Esmay's run as head coach, that the Devils have had less than 40 wins in a season. In order for the Devils to reach 40 they have to win 24 of their next 28 games which include some pretty stout opponents like No. 5 Arizona, No. 16 Stanford, and their opponent this weekend No. 23 Oregon State. The Sun Devils have a tough road ahead of them as a team. That's why fans should turn their focus towards individual performances of the players. 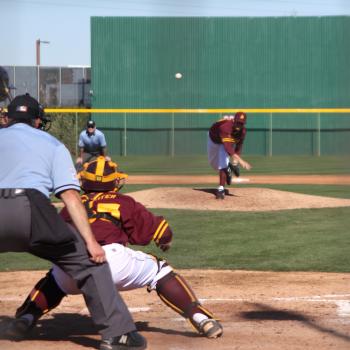 There are many players on this year's team who stand out. Mainly, Abe Ruiz, Joey DeMichele, Deven Marrero and Brady Rodgers. The core to this year's team, these players have accolades that fans can get behind. Ruiz, DeMichele and Rodgers have won Pac-12 player of the week awards so far this year. DeMichele, Marrero, and Rodgers are all on the watch list for the 2012 Golden Spikes Award, and the Devils are tied with Stanford for most players on the watch list in the Pac-12. Scouts rank Rodgers' control as the best in his draft class. DeMichele has been called one of the best batters in the Pac-12. Marrero… let's just face it, he's pretty darn good. Meaning that all three of them have a fairly good chance to make the semi-finals if not the finals if their performances keep up. The list will be shortened down to the 30 player semi-final on May 29th. This is also the day when fans can begin voting for the 3 Golden Spikes finalists.

Make sure to mark May 29th down on the calendar and then once the semi-finalists are announced be sure to get voting (for Sun Devils of course)! In the mean time, fans can't give up on the team. Their record may not be quite what everyone expected it to be, but we still have a "Most Fans in the Pac-12" title to defend, as well as some spectacular athletes to cheer on. This is when the team needs its fans more than ever. Sun Devil fans come out no matter what the score board says, and no matter what our record is. Besides, who doesn't want to sit outside and watch a little baseball?