Origami, the centuries-old Japanese paper-folding art, has inspired recent designs for flexible energy-storage technology. But energy-storage device architecture based on origami patterns has so far been able to yield batteries that can change only from simple folded to unfolded positions. They can flex, but not actually stretch. 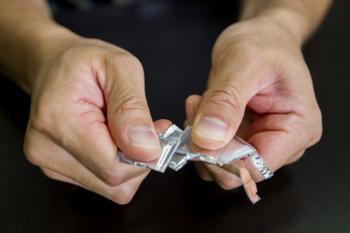 An ASU research team has used a variation of origami, called kirigami, as a design template for batteries that can be stretched to more than 150 percent of their original size and still maintain full functionality. Photo by: Jessica Hochreiter/ASU Download Full Image

Now an Arizona State University research team has overcome the limitation by using a variation of origami, called kirigami, as a design template for batteries that can be stretched to more than 150 percent of their original size and still maintain full functionality.

A paper published on June 11 in the research journal Scientific Reports describes how the team developed kirigami-based lithium-ion batteries using a combination of folds and cuts to create patterns that enable a significant increase in stretchability.

Hanqing Jiang, an associate professor in the School for Engineering of Matter, Transport and Energy, one of ASU’s Ira A. Fulton Schools of Engineering, leads the team.

The kirigami-based prototype battery was sewn into an elastic wristband that was attached to a smart watch. The battery fully powered the watch and its functions – including playing video – as the band was being stretched.

“This type of battery could potentially be used to replace the bulky and rigid batteries that are limiting the development of compact wearable electronic devices,” Jiang said.

Such stretchable batteries could even be integrated into fabrics – including those used for clothing, he said.

Jiang credits Song and Wang for ideas for using various kirigami patterns, as well as for conducting experiments and characterizing the properties of the materials used to develop the technology.

Other contributors include ASU engineering graduate students Cheng Lv, Yonghao An, Mengbing Liang, Teng Ma and David He, a Phoenix high school student, along with Ying-Jie Zheng and Shi-Qing Huang from the MOE Key Lab of Disaster Forecast and Control in Engineering at Jinan University, Guangzhou, China.

An earlier paper in the research journal Nature Communications by Jiang and some of his research team members and other colleagues provides an in-depth look at progress and obstacles in the development of origami-based lithium-ion batteries.

The paper explains technical challenges in flexible-battery development that Jiang says his team’s kirigami-based devices are helping to solve.

Read more about the team’s recent progress and the potential applications of stretchable batteries in Popular Mechanics, CBS News, the Christian Science Monitor, Yahoo News and the Daily Mail.

Using Twitter and Google search trend data in the wake of the very limited U.S. Ebola outbreak of October 2014, a team of researchers have found that news media is extraordinarily effective in creating public panic.

Using Twitter and Google search trend data in the wake of the very limited U.S. Ebola outbreak of October 2014, a team of researchers from Arizona State University, Purdue University and Oregon State University has found that news media is extraordinarily effective in creating public panic.

Because only five people were ultimately infected – yet Ebola dominated the U.S. media in the weeks after the first imported case – the researchers set out to determine mass media's impact on people's behavior on social media.

A team of researchers examined whether news reports about the Ebola virus were effective in creating public panic. Download Full Image

"Social-media data have been suggested as a way to track the spread of a disease in a population, but there is a problem that in an emerging outbreak people also use social media to express concern about the situation," explained study team leader Sherry Towers of ASU's Simon A. Levin Mathematical, Computational and Modeling Sciences Center. "It is hard to separate the two effects in a real outbreak situation."

In the case of the Ebola outbreak in the U.S., the team was confident that the Ebola-related social-media data were due only to public concern or interest in the outbreak, and thus it was an unprecedented opportunity to study how news media may sow panic in a population.

The team collected data on millions of U.S. Ebola-related Google searches and tweets in October, related to such phrases as "Ebola symptoms" and "Do I have Ebola?"

Mathematical epidemiologist Carlos Castillo-Chavez of the School of Human Evolution and Social Change in the College of Liberal Arts and Sciences said, "When we compared the temporal patterns in these data to the patterns in the number of Ebola-related news stories that ran on major news networks, we found that the peaks and valleys in both almost exactly matched. We were amazed at how incredibly similar the temporal patterns were."

The team fit a mathematical contagion model for the spread of disease to the data and was able to show that the trends in the news stories explained nearly all of the variation in the social media.

In addition, the analysis noted a "boredom" effect, where after a few weeks Ebola-related news stories became less and less able to inspire people to perform Ebola-related Google searches or tweets.

"Mass Media and the Contagion of Fear: The Case of Ebola in America," which describes the study and presents the team's findings, appears in the June 11 edition of PLoS One.

Towers is excited about the potential use for this study in future outbreak situations because it provides valuable insight into just how strongly news media can manipulate public emotions on a topic.

Global Engagement The College of Liberal Arts and Sciences Research