"Urban heat island" is the technical term used to describe increased temperature in cities relative to surrounding rural areas. The phenomenon can be dangerous – it can increase the severity of heat waves and negatively impact air quality – proving harmful to residents’ health and safety.

Much research exists in the U.S. on severe heat events in urban environments, and a good deal of that work has been done for Phoenix, a desert city and the sixth largest in the United States. But very little research examines urban climate in developing countries. Valeria Benson-Lira hopes to change this. 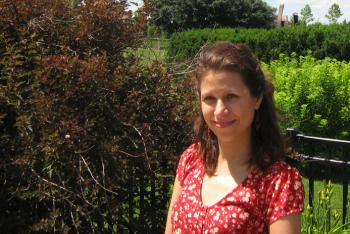 Benson-Lira, a master’s candidate in geography, specializes in climatology and meteorology. This summer, she won the 2014 National Weather Association David Sankey Minority Scholarship in Meteorology. The award will contribute to Benson-Lira’s master’s thesis research, which will examine the effects of Mexico City’s urbanization on its regional climate.

A native of Veracruz, Benson-Lira chose to pursue her current research after working as an industrial engineer.

“I am a socially and environmentally interested person, and I decided to study in the U.S. where there is an interest in climate change and urban environments,” Benson-Lira said. She added that there is a dearth of climate change research in Latin American universities and this is often related to a lack of resources; universities devote their limited resources elsewhere.

Benson-Lira’s research will examine how the climate of Mexico City and its surroundings has changed since the days of the Aztecs, and she will look at measures that could counteract the urban heat island effect in the contemporary Mexico City metropolitan area. She will do this through climate modeling experiments.

Climate modeling is carried out through computer programs that simulate both past and future climates. Climate model systems use differential equations and physically realistic representations of land surfaces to help understand and predict climate. The systems must take into account many factors, including winds, heat transfer, solar radiation, relative humidity and surface hydrology.

Benson-Lira will look at climate in the Mexico City metropolitan area with the Weather Research and Forecasting Model, a weather prediction system developed in the late 90s by several leading weather research institutions. She chose to focus on Mexico City and its surroundings because the region is now considered the third largest metropolitan area in the world, and she believes there is a real lack of climate work on it.

A first stage of Benson-Lira’s research will examine how the Mexico City metropolitan area is most accurately represented by the Weather Research and Forecasting Model. She will look at the existing model’s accuracy in simulating modern day meteorology in the area.

Benson-Lira will then conduct simulations to compare the region’s current climate with its climate during the last days of the Aztecs.

Modern Mexico City was built on top of the ruins of the Aztec capital, Tenochtitlán. While the center of the Aztec empire was constructed around a network of five lakes with flood management handled through levees and canals, upon conquest, the Spaniards drained lake waters. This action had a disastrous impact and eventually led to the primary lake, Lake Texcoco, going dry.

Using modeling, Benson-Lira hopes to build deeper understanding of changes in the region’s climate since the time of lake drainage. She also plans to look at possible solutions for the urban heat island effect in present-day Mexico City, such as the use of cool roofs – roofs that reflect incoming solar rays back into space.

Matei Georgescu, Benson-Lira’s adviser and an assistant professor in the School of Geographical Sciences and Urban Planning, explained his enthusiasm for Benson-Lira’s planned research.

“Benson-Lira’s focus on Mexico City’s urban environment will fill an important gap in the community’s understanding of urbanization impacts for a global city of national prominence that has, as remarkably surprising as it may be, received little research attention,” said Georgescu.

Benson-Lira said that after completing her master’s research, she is considering a doctorate in geography with a focus in atmospheric science and climatology.

The School of Geographical Sciences and Urban Planning is an academic unit of the College of Liberal Arts and Sciences.

Scholarship support enabled about 20 students, of more than 30 total participants, to attend a one-week, overnight camp hosted by Teachers College on the Polytechnic campus.

For one week each summer at Arizona State University’s Polytechnic campus, high school students from around the nation come together to learn what it takes to be a teacher at the Hunnicutt Future Educators Academy. In June of 2014, more than 30 students participated in the overnight camp hosted by Mary Lou Fulton Teachers College – many on scholarship.

Devon Ferguson, a senior from Harper High School in Chicago, heard about the camp – named after the late Harold B. Hunnicutt, a former professor of education at ASU – from his school counselor, who encouraged him to apply. After submitting a statement indicating his interest and financial need, he received a full scholarship to make the trek to Arizona and explore what it would be like to pursue his passion: becoming a special education teacher at his former elementary school. 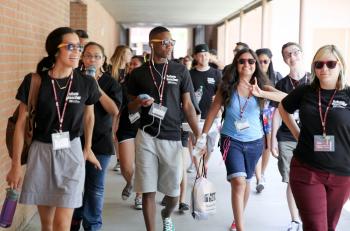 “Teaching means a lot to me because you can help to change somebody’s life,” Ferguson said – a sentiment made even more powerful when you learn that his high school, which was featured in a February 2013 NPR news story, is located in a Chicago neighborhood plagued by gang violence. “I want to show kids that anything is possible if you go for it.”

A total of $5,000 in funding was made available this year to qualified Hunnicutt participants by Teachers College’s Office of the Dean. Ferguson was one of about 20 students who received full or partial funding to attend the academy, which typically costs nearly $400 per person.

“It’s nice to help someone who wouldn’t otherwise have had that opportunity,” said Corey Stevenson, a student recruitment coordinator senior in Teachers College who helps lead the camp experience.

While scholarship consideration is given to students from both in- and out-of-state, it is particularly helpful for those students who also may incur travel expenses to attend. This year, out-of-state Hunnicutt participants traveled to the Phoenix area from Nevada, California, Ohio and Illinois.

“No matter where these students are from, or what their background, when they all get together, they’re just kids and care about the same things,” Stevenson said.

Aside from simply hanging out and having fun, for Ferguson, that meant touring the ASU athletics’ facilities on the Tempe campus and hearing from current faculty and students about what it means to be in college and major in education.

He expressed particular excitement over the high employment rate for Teachers College alumni. An ASU exit survey of 2012-2013 graduates found that 93 percent of Teachers College undergraduate students pursuing jobs were employed or had at least one job offer 90 days after graduation.

And to sum up his experience? Ferguson had just three words: “Camp was awesome.”