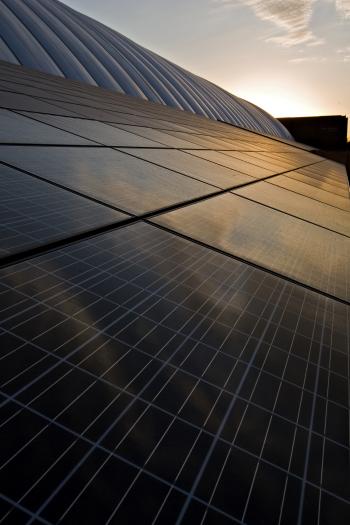 SunPower is engineering and constructing the plant on the southeast corner of the ASU Polytechnic campus, and will operate and maintain it. Under a purchase-power agreement, SRP will buy the entire output of the solar plant from SunPower and, in a separate agreement, ASU will purchase all of the energy attributable to the plant for use at its Polytechnic campus.

The plant is expected to produce an amount of energy equal to that needed to serve about 225 SRP customers’ homes, will require minimal water use and supports ASU’s renewable energy goals. Construction of the plant is contingent on a number of factors, including receipt of all applicable permits.

As of Dec. 31, 2011, ASU was generating 14.5 megawatts of solar energy. “This dynamic project with SunPower enables us to embrace innovative technologies and also facilitate possible education opportunities for our students,” said Brixen.

“As we continue to add resources to our sustainable portfolio, SRP is very interested in finding new low-cost and efficient renewable-energy technologies that can help keep our customers’ prices low,” said John Sullivan, SRP’s chief resource executive. “SunPower’s C7 Tracker System is the type of promising technology that can provide both benefits.”

The C7 Tracker combines single-axis tracking technology with rows of parabolic mirrors, reflecting light onto 22.8 percent efficient SunPower Maxeon solar cells, the world’s most efficient large-area solar cells. Using mirrors to reduce the number of solar cells required to generate electricity will lower the LCOE by up to 20 percent compared to competing technologies. For example, the 1-megawatt C7 Tracker power plant at ASU will require only 172 kilowatts of SunPower solar cells.

“The SunPower C7 Tracker leverages SunPower’s depth of experience developing reliable tracking systems and delivers bankable technology with guaranteed performance,” said Howard Wenger, president, regions, of SunPower. “We applaud our partners on this project in selecting this advanced technology platform that will deliver cost-effective renewable energy for the long-term.”

The ASU solar plant will be the third commercial-scale solar facility in the Valley of the Sun to provide energy for SRP. Recently, SRP reached an agreement to purchase the output of a 19-megawatt solar photovoltaic plant in Queen Creek. Copper Crossing – a 20-megawatt facility located in Pinal County and designed and built by SunPower – began providing energy for SRP’s Community Solar program last year. More than 100 schools in 11 Valley school districts are tapping into the power of the sun from that plant to offset a portion of their electric needs through the program.

Community Solar is also open to residential customers, allowing customers to invest in solar energy without the upfront costs or maintenance of a rooftop system.

The SRP board of directors has set a goal to meet 20 percent of SRP’s retail electricity requirements through sustainable resources by the year 2020.  The goal increases each year until 2020. For the most recent fiscal year, SRP exceeded the 5 percent goal, providing about 9 percent of retail energy needs with sustainable resources including wind, solar and geothermal energy, hydro power and conservation and energy-efficiency measures.

Can we save whales by putting a price on their heads?

Can we save whales by putting a price on their heads?

Every year, a group of anti-whaling nonprofit organizations, including Greenpeace, Sea Shepherd and the World Wildlife Fund, spend – by conservative estimates – some $25 million on a variety of activities intended to bring an end to commercial whaling.

And every year, commercial whaling continues to grow. 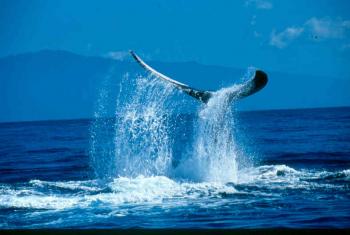 Under the current, largely unregulated system, the number of whales harvested annually has doubled since the early 1990s, to about 2,000 per year. Further, many populations of large whales have been severely depleted and continue to be threatened by commercial whaling.

While protests, education, lobbying and dangerous confrontations on the high seas have saved some whales, the whaling industry shows no sign of shutting down – or slowing down.

Now, an economist and two marine scientists, writing in the Jan. 12 issue of the journal Nature, suggest a new strategy that they believe could save whales: put a price on them.

In the article, “A market approach to saving the whales,” Leah Gerber, a population ecologist and marine conservation biologist at ASU, joins lead authors Christopher Costello and Steve Gaines, professors of economics and marine science, respectively, at the Bren School of Environmental Science & Management at the University of California Santa Barbara, to propose a market-based solution to saving whales.

“We propose an alternative path forward that could break the deadlock: quotas that can be bought and sold, creating a market that would be economically, ecologically and socially viable for whalers and whales alike,” the authors write.

“The authors have put forth some bold, fresh thinking aimed at a barbaric practice that has become an intractable problem," said Mike Sweeney, executive director of The Nature Conservancy in California.

The idea has its roots in trading markets for such air pollutants as sulfur dioxide and nitrogen oxides, which have reduced pollutants more and at a lower cost in the United States than resulted from traditional regulatory policy; conservation and wetland management programs, which have resulted in more than 200,000 acres of land being set aside; and individual transferable quotas, which have been successful in sustaining fisheries and fishermen in New Zealand, Iceland and Canada.

The authors explain that the concept of auctioning off annual whale-catch quotas was suggested as early as 1982 but was never implemented, perhaps, they suggest, because whalers would have had to purchase something they had always received for free. They add that a “whale-conservation market,” would be different, with “whale shares” being allocated in sustainable numbers to all members of the International Whaling Commission. Recipients could then exercise them (by harvesting their quota), hold onto them for a year, or permanently retire them. The shares would be tradable in a carefully controlled global market.

In the two most extreme scenarios, whalers could end up purchasing all the shares and harvesting whales at the established sustainable level, or conservationists might purchase all the shares, so that no whales would be harvested.

“Because conservationists could bid for quotas, whalers could profit from them even without harvesting the animals,” the professors say. And while they concede that “there are multiple challenges in getting such a scheme to work, including agreeing on sustainable quotas and on how shares should be allocated,” they do not see those obstacles as insurmountable.

But would whalers settle for quotas? In fact, the authors say, whaling nations have previously proposed quotas, which would legitimize their harvest. Many anti-whaling groups, on the other hand, have had a fundamental problem with setting quotas for the same reason, feeling that quotas would appear to legitimize commercial whaling.

“If quotas are set properly,” the authors suggest, “transactions would reduce the number of whales harvested, quite possibly to zero, unlike existing protocols, which seem to be increasing the catches.”

They conclude: “The fervent anti-whaler will be quick to argue you cannot and should not put a price on the life of a whale; a species should be protected irrespective of its economic value. But unless all nations can be convinced or forced to adopt this view, whaling will continue. It is precisely because of the lack of a real price tag in the face of different values that anti-whaling operations have had such limited success. ... By placing an appropriate price tag on the life of a whale, a whale conservation market provides an immediate and tangible way to save them.”

Gerber, who is a professor in the School of Life Sciences in ASU’s College of Liberal Arts and Sciences, has spent the last decade as an external reviewer for the International Whaling Commission. Having previously contributed science-based studies that have influenced the commission’s policies, Gerber hopes that the “whale shares” idea can be taken to the next step: to discuss implementation directly with the commission.