ASU School of Art makes a move to downtown Phoenix

The ASU School of Art in the Herberger Institute for Design and the Arts is moving five of its 10 graduate studio programs to downtown Phoenix, in a shift that will consolidate students and bolster the school’s position as a national arts leader.

"Moving a number of the graduate programs in the School of Art to state-of-the-art facilities in the warehouse district downtown allows Herberger Institute students and faculty more avenues for connecting with the emerging arts scene, and provides an important opportunity to build Arizona State University's presence in Phoenix,” said Richard Stanley, senior vice president and university planner for ASU. 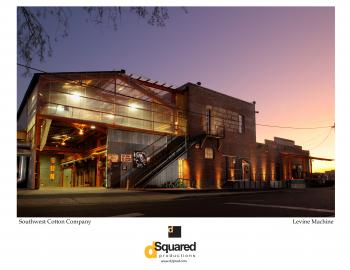 “This marks a new era for the ASU School of Art,” said Adriene Jenik, the school's director. “Having a range of student graduate programs in a space that is designed to support their needs and that is worthy of their talents is a dream of mine.

“Our gallery and critique space will present greater opportunities to engage with our publics, and I’m thankful to the CCBG architects and our facilities group here at ASU for their partnership and enthusiasm realizing this vision.”

The building’s owner, artist and developer Michael Levine, won the grand prize in the Governor’s Heritage Preservation Honor Awards in 2007 for rehab and adaptive reuse of the building that will house the graduate programs.

Levine noted that it was unusual for art students to have work produced, vetted, critiqued and then displayed all in the same facility. “I can’t think of it being done at this scale anywhere in the state. I think it’s really going to ramp it up for everyone involved," he said.

"ASU's School of Art is a perfect fit for downtown Phoenix and the ASU Downtown campus that has brought so much life to Phoenix's urban center," said Phoenix Mayor Greg Stanton. "The School of Art will add excitement in the warehouse district and enhance connectivity with downtown's other innovative arts districts.”

The move is scheduled to take place in two phases, according to Jenik. During the first phase, which will be completed by Jan. 15, 2014, the graduate painting and drawing programs and studios will move downtown, along with the Step Gallery, a new critique space and Jenik’s studio. During the second phase, which is expected to be completed by May 15, the graduate programs in sculpture, fibers and intermedia will follow.

At the end of both phases, the School of Art graduate programs, studios and gallery will occupy 26,232 total square feet of space.

“Consolidating programs means students can work together,” said Jenik. “And with a proper studio environment, in which everyone will have around a 250-square-foot studio, the School of Art can host open studio tours.”

A public opening reception, studio tour and show of work by graduate painting and drawing students are planned for 7-9 p.m., Friday, Jan. 17, 2014.

“I am very excited about the School of Art relocating a number of graduate programs to the warehouse district in downtown Phoenix,” said Michael Underhill, interim dean of the Herberger Institute for Design and the Arts. “Director Adriene Jenik and members of her faculty have done extraordinary work to make this possible.”

Underhill said that the move not only brings Herberger students closer to the arts scene in downtown Phoenix, but also gives the institute the opportunity to “serve ASU students in the other colleges that are downtown, and to assist the city in its ongoing efforts to create a lively urban experience.”

How would you celebrate the Marine Corps' 238th birthday? Running 238 miles and knocking out 1775 pull ups is how – if you are a member of Arizona State University Naval Reserve Officers Training Corps.

How would you celebrate the Marine Corps’ 238th birthday? Running 238 miles and knocking out 1775 pull ups is how, if you are a member of Arizona State University Naval Reserve Officers Training Corps.

“I was stationed at Marine Corps Air Ground Combat Center Twenty-Nine Palms, California, for my last duty station. They did an event like this and I thought it was a great idea,” said Timothy Garcia, staff sergeant and the assistant marine officer instructor at ASU. 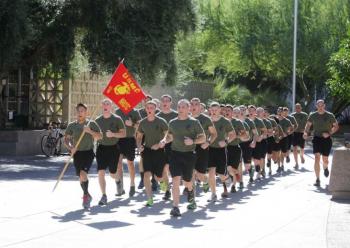 “So, when I got stationed here, I wanted to do something similar at ASU. I looked the fact that the U.S. Marine Corp was established on Nov. 10, 1775, I thought it would be a perfect kick off ASU’s Salute to Service Week.”

While marines are tough, 1775 pull ups and 238 miles is clearly more than any one midshipman should do, so event leaders divided the burden amongst the 40 Marine midshipman and staff. Each participant ran 1 mile loops on the ASU campus until the 238 mile goal was reached – more than 12 hours of non-stop running.

Starting at noon, Nov. 8, the event kicked off with Midshipman First Class Michael Harting. "The relay was a great way to instill camaraderie and esprit de corps amongst the Marine Options of ASU's Naval ROTC program," said Harting, after his first mile and set of eight pull ups. “Each mile represents more than a year of the Marine Corps history. It also represents the men and women who have come before us.”

Continuing through the night and into early morning of Nov. 9, the Marine Option midshipmen and active duty Marines of ASU NROTC completed the event at the top of A-Mountain. There, they listened to General John A. Lejeune’s birthday message, a tradition in the Marine Corps since Lejeune’s first reading on Nov. 1, 1921. The message brought closure to an experience that ASU Naval ROTC participants said they will never forget.

“This event gave us a chance to bond and celebrate the 238th birthday of our beloved Corps. It has also given us a great sense of pride not only in the Marine Corps but also in our ASU NROTC unit,” said Midshipman Benjamin Crites. “I am proud to say I helped start this program and have been able to see it develop from a small group of new students without uniforms, to one of the largest units in the nation."

Expect to cheer them on in 2014 for 239 miles, said Garcia. “I hope to make this event an annual tradition at ASU.”

The Naval ROTC unit at Arizona State University was established in 2010 and has since grown to be one of the largest in the nation, including over 130 Marines and Marine Option midshipmen in the Sea Devil Battalion. Salute to Service is an annual weeklong event at ASU that highlights and celebrates our veterans and service members.