Imagine what it might be like for your favorite book to come alive. Detailed images of each scene appear before your eyes, with music to set the tone, or dialogue giving each character a unique voice. Perhaps there are even smells wafting through the air – the woody aroma of a log cabin or sterile scent of a hospital.

These types of multisensory features would certainly change the experience of reading a book. They might also allow us to understand and appreciate the story in new ways. For Arizona State University art historian Corine Schleif and musicologist Volker Schier, images and sound are paramount to their research. Together, they have used modern multimedia tools to bring a 500-year-old manuscript to life. The result is a first-of-its-kind international pilot project, called “Opening the Geese Book.” 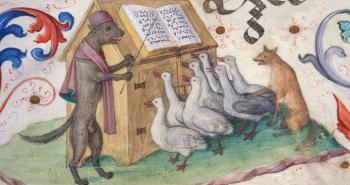 The Geese Book is a two-volume liturgical manuscript, originally produced in Nuremberg, Germany, between the years 1503 and 1510. It contains the complete mass liturgy for the entire year, used at the parish church of St. Lorenz until 1525. Measuring 30 by 50 inches, the books are the largest on record at the Pierpont Morgan Library in New York. Their monumental size allowed for the entire church choir, made up of boys and young men, to gather around the only copy when it came time to sing.

All throughout the Geese Book, fanciful illustrations and designs are scattered among the pages of music. Animals, mythological creatures, dragons, hybrids and more are all depicted, as well as more traditional religious scenes. But the most famous painting shows a choir of geese with a wolf as their choirmaster.

This historical work was once only accessible to a select few. Scholars could see it if they had a good reason, Schleif says, noting that she was able to view the book many years ago while working on her dissertation. But in 2012, she set out to make the Geese Book available to anyone, anywhere in the world, digitally.

Since then, Schleif and her partners from numerous disciplines and countries have collaborated to make this historical text come alive. The culmination of their work is a website including all 1,120 pages of the two-volume Geese Book, 23 recorded chants and nine videos providing background information about the people who originally created the manuscript.

Not only does digitizing the book help preserve it from being handled in person, it allows scholars and lay people alike to see the illustrations in extraordinary detail. Schleif says one of the most interesting parts of the project has been working to contextualize the illustrations – also known as illuminations – so that viewers of our time can come up with their own informed interpretations.

"What I notice in a lot of the illuminations is a kind of life and death struggle, but we don’t know who’s going to win,” Schleif says. “Here you’ve got a fox after these geese, but he doesn’t have them yet. We don’t know how it’s going to turn out.”

One detail that has influenced some interpretations of the famous geese choir drawing is that the wolf has an erection. “People look at this for a long time before they see it,” Schleif says. Scholars have suggested that perhaps the image is as much about power as it is about sex. It could be meant as a warning that those in power not take advantage of their charges, but also that the underlings maintain vigilance.

"I think the bottom line interpretation here is to be wary of authority,” Schleif says. The images can also offer colorful glimpses into the history of the Middle Ages. An illustration of men with mugs of beer may first appear simply as a happy drinking scene, but becomes more meaningful with historical context.

“We take freedom of assembly for granted, but the good people of Nuremburg couldn’t do that,” Schleif explains. The Patricians, who were at the top of society, had the right to hold social gatherings. But the lower and middle levels were forbidden from meeting each other on weekends or evenings. There were exceptions, however, like the feast of church dedication, which is being celebrated at the bottom of the page where the liturgy appears for that day. “Then those controls fell by the wayside,” Schleif says.

While the illustrations are fascinating and important in their own right, Schleif and her co-director Volker Schier felt that providing an audio component was just as essential.

“When this manuscript was made, it wasn’t just to be admired as pretty pictures and black dots on parchment. It was meant to be sung, and it was sung all year,” Schleif says. “We believe that music can’t be studied without hearing it.”

Working with the renowned choir Schola Hungarica of Budapest, the researchers recorded chants from the liturgy, providing transcriptions and translations for each. These recordings were also made available separately as a CD. The website also includes a series of video clips providing information about the historical characters who created the Geese Book – a cleric named Friedrich Rosendorn was responsible for the writing, and the artist Jakob Elsner, whom scholars believe provided the illuminations.

Using a web-based platform with audio and visual features has given the Geese Book a sort of modern revival. Schleif hopes the project will serve as a model for future explorations. Her next endeavor is a project called Extraordinary Sense Scapes, focusing on the late medieval Brigittine monastery in Sweden. Again, Schleif will work with collaborators to create a multisensory experience – the acoustic quality of the music in that particular monastery, the colors that were visible, even the smells that may have been present.

“It will be an architectural reconstruction, acoustic reconstruction and possibly getting into some olfactory things,” Schleif says. “We want to explore situated sensory experiences, knowing that the senses are not distinct but that the sensorium works together as a whole.” In recreating this setting, researchers hope to time travel, in a sense, and glean insights about social history, gender and class.

What if we really could go back in time? What questions would Schleif be most eager to have answered?

“I’d want to know what they had in mind with the illumination of the geese and the wolf and the fox,” she says. “Was it something current that had happened? Who did they want to see that, and didn’t they want to see it? What were they trying to communicate to the little boys who were going to look at it? I’d ask all those questions.”

But for now, that famous illustration remains a mystery, open to interpretation.

Native American poet, musician and author Joy Harjo and Winona LaDuke, an internationally acclaimed author, orator and activist, will visit the West campus Sept. 30 through Oct. 2 for a series of thought-provoking discussions.

Native American poet, musician and author Joy Harjo and Winona LaDuke, an internationally acclaimed author, orator and activist, will visit Arizona State University’s West campus Sept. 30 through Oct. 2 for a series of thought-provoking discussions. The public is invited to attend presentations by Harjo and LaDuke, as well as a panel discussion in which they will both participate.

Harjo’s keynote address is set for 7 p.m., Sept. 30, at at the La Sala Ballroom in the University Center Building. 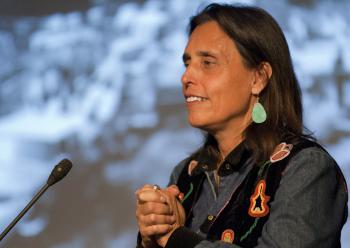 The panel discussion with Harjo and LaDuke will be held at 4 p.m., Oct. 1, at the Kiva Lecture Hall in the Sands Classroom Building. The moderator is Gloria Cuadraz, an associate professor in ASU’s New College of Interdisciplinary Arts and Sciences, the core college on the West campus. New College is sponsoring the visit by Harjo and LaDuke.

LaDuke will deliver her keynote address at 7 p.m., Oct. 2, at the La Sala Ballroom in the University Center Building.

There is no admission charge or parking fee for attendees at these events. ASU’s West campus is at 4701 W. Thunderbird Road in Phoenix. For more information and to R.S.V.P. for any of the three events, email mary.e.bauer@asu.edu.

Harjo was born in Tulsa, Oklahoma, and is a member of the Mvskoke Nation. Her books of poetry include “How We Became Human” and “She Had Some Horses.” She has received awards including the New Mexico Governor’s Award for Excellence in the Arts, the Lifetime Achievement Award from the Native Writers Circle of the Americas, and the William Carlos Williams Award from the Poetry Society of America. Harjo has released five compact discs of original music, and in 2009 won a Native American Music Award (NAMMY) for Best Female Artist of the Year.

LaDuke is a member of the Mississippi Band Anishinaabeg, who lives and works on the White Earth Reservations. She is also the executive director of the advocacy organization Honor the Earth, where she works on a national level to advocate, raise public support and create funding for frontline native environmental groups. LaDuke has written extensively on Native American and environmental issues. She is a former board member of Greenpeace USA. In 1998, Ms. Magazine named her Woman of the Year for her work with Honor the Earth.

As part of this year’s Summer Read program at ASU’s West campus, all incoming freshmen read Harjo’s memoir “Crazy Brave,” which recounts how her difficult childhood and the hardships of teen motherhood caused her to suppress her artistic gifts, and nearly brought her to her breaking point. “It was the spirit of poetry who reached out and found me as I stood there at the doorway between panic and love,” Harjo wrote in “Crazy Brave.”

The Summer Read program has proven successful in building a sense of community on the West campus and encouraging New College students, from the start of their college careers, to make connections and develop leadership skills, said Marlene Tromp, dean of New College and vice provost at the West campus. Each year a different book is selected for incoming freshmen to read.

“Participating in Summer Read exposes students to a range of intellectual perspectives that enrich the ideas they are encountering in their courses,” Tromp said. “It also makes it easier for freshmen to forge relationships with their fellow students as they discuss the ideas found in the works of our visiting authors.”

In addition to reading a book by Harjo, freshmen watched a video of a presentation titled “Seeds of Our Ancestors, Seeds of Life,” which LaDuke made at a TEDx conference. The talk centers on issues associated with genetic engineering and patenting of crops.

Freshman students then created responses to Harjo’s book and LaDuke’s TEDx talk. The responses came in a variety of written, visual and performance styles. They will be displayed during the visit to campus by Harjo and LaDuke.

Details about this and other upcoming cultural and artistic events at ASU’s West campus may be found at https://campus.asu.edu/west/events.