Mummies excavated nearly a century ago are yielding new information about past lifeways through work conducted in Arizona State University’s Archaeological Chemistry Laboratory. 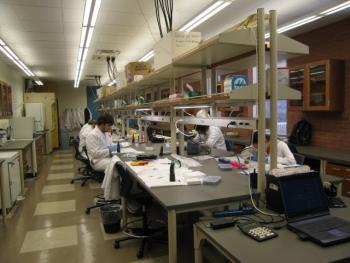 The findings were recently published in the Journal of Archaeological Science.

The mummies were unearthed from one of the most famous sites in Peru: the Paracas Necropolis of Wari Kayan, two densely populated collections of burials off the southern coast. The region has a rich archaeological history that includes intricate textiles and enormous geoglyphs, yet it has been relatively overlooked for bioarchaeological research.

With support from the National Science Foundation, ASU associate professor Kelly Knudson and her colleagues are attempting to rectify that.

In addition to Knudson, the team was made up by Ann H. Peters, of the University of Pennsylvania Museum of Archaeology and Anthropology, and Elsa Tomasto Cagigao, of the Pontifical Catholic University of Peru.

The researchers used hair samples – between two and 10 sequential samples for each mummy, in addition to two hair artifacts – to investigate the diets of Paracas’ ancient people. They focused on carbon and nitrogen isotope analysis of keratin to determine what these individuals ate in the final stages of their lives.

Diet not only provides insight into health, but can also indicate where people lived and traveled, as well as offer clues about their daily lives by pointing to whether their foods were sourced from farming, fishing, hunting or gathering.

During the last months of their lives, the Paracas individuals appear to have eaten primarily marine products and C4 and C3 plants, such as maize and beans. Also, they were either geographically stable or, if they traveled between the inland highlands and coastal regions, continued to consume marine products.

“What is exciting to me about this research is that we are using new scientific techniques to learn more about mummies that were excavated almost 100 years ago. It is a great application of new science to older museum collections,” says Knudson, who is in ASU's School of Human Evolution and Social Change in the College of Liberal Arts and Sciences.

Knudson, who is affiliated with the school’s Center for Bioarchaeological Research, explained why it is so important to learn about the lived experiences of people who existed long ago.

“By using small samples of hair from these mummies, we can learn what they ate in the months and weeks before they died, which is a very intimate look at the past,” Knudson said.

When first discovered in 1927 by Peruvian archaeologist Julio Tello, each mummy was bound in a seated position; found with burial items, like baskets or weapons; and wrapped in a cone-shaped bundle of textiles, including finely embroidered garments.

Since the sampled individuals were mostly male, Knudson and her colleagues suggest that future research may involve more females and youths. The researchers also plan to further examine artifacts and mortuary evidence to build context for their isotopic data.

More information on the Necropolis of Wari Kayan can be found at the Paracas Archaeology Research site.

GreenBiz U returns to ASU for 2015 Sustainability Solutions Festival

Highlighting the power and latest trends of sustainable business, GreenBiz U is returning to Arizona State University for its 2015 forum.

GreenBiz U returns to ASU for 2015 Sustainability Solutions Festival

The power of global business leaders discussing the latest trends, challenges and opportunities in sustainable business is returning to Arizona State University for GreenBiz U, a shadow conference of the 2015 GreenBiz Forum taking place in Paradise Valley, Arizona, Feb. 17-19. 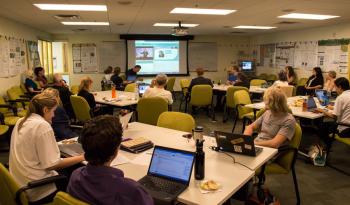 This diverse array of speakers will address topics such as the value of partnerships, portable solar electronics, zero carbon campuses and the State of Green Business report that will be discussed during the GreenBiz Forum opening. All presentations will take place in Wrigley Hall, room 481. All sessions are free and open to ASU students, faculty, staff and community partners.

"This is an extraordinary collaboration with far-ranging impact,” said Joel Makower, chairman and executive editor of GreenBiz Group, Inc. “By leveraging our collective networks and knowledge bases, we are convening an unparalleled group of speakers and attendees that will make this week a truly exceptional opportunity for knowledge sharing and networking among the sustainable business community."

GreenBiz U will mark the first campus presentation by Bonini, who last fall was named CEO of The Sustainability Consortium, a multi-stakeholder nonprofit organization that translates scientific information into business practice.

More than 100 member organizations and companies collaborate with scientists to design and implement credible, transparent and scalable science-based measurement and reporting systems that drive innovation to improve consumer product sustainability. Bonini and Kevin Dooley will discuss the function and future goals for The Sustainability Consortium, which is jointly administered by ASU and the University of Arkansas.

"The Sustainability Consortium is an important part of ASU’s commitment to sustainability, serving as a bridge between academic science and real-world business to drive more sustainable consumer products," said Bonini. "With the global reach of our members, along with our partner institutions at ASU, Arkansas, Wageningen University in The Netherlands and Nanjing University in China, this session is a valuable opportunity for the ASU community to understand the scale, scope and impact of this organization that is based in their 'backyard.'"

Now in its second year, the Sustainability Solutions Festival’s partnership between ASU, GreenBiz and The Sustainability Consortium has positioned the week’s events as a premiere destination for audiences of all ages to learn about and engage in sustainability solutions. This year’s theme is “(re)imagine what’s to come,” showing how one organization, one community or even one person can make positive change in the world.

“We are extremely proud of our partnership with GreenBiz for the Sustainability Solutions Festival and feel fortunate to be able to bring such esteemed sustainability leaders to the ASU campus to engage our university community,” said Patricia Reiter, executive director of the Walton Initiatives.