What does it take to be among only a handful of people who have ever reported spotting one of the most elusive, well-camouflaged and endangered big cats in the world – a snow leopard? According to Arizona State University researcher Mimi Kessler, a combination of great company, a keen eye and good luck may be the key.

Kessler, a doctoral candidate at ASU’s School of Life Sciences, spotted a snow leopard recently in Russia’s Altai Mountains. She says every sign, image and sighting leads to a better understanding of the endangered species. 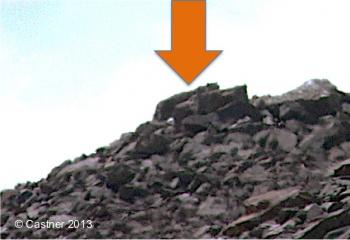 Called “ghost of the mountains” by locals, the snow leopard spends most of its life alone and remains scattered in the Tien Shan, Altai-Sayan and Himalayan mountain ranges of Central Asia. Russia is home to only about 90 snow leopards, of which 30 to 40 are said to be in the Altai Mountains.

“The odds were against us – this creature is rare and wary, the territory it inhabits is large and the time we had was relatively short,” Kessler, a biologist and ornithologist, says. “I expected to observe, at best, scrapes and signs left by the cat, not the creature itself, so it was a fantastic surprise. I could hardly sleep that night, remembering the events of the day.”

Kessler was in the Altai Mountains as part of the Wild Altai expedition, a program run by an American non-profit, called The Altai Project, that promotes conservation of biodiversity and community development in the region. Kessler, fluent in Russian and trained in Altai language, volunteered as a linguistic and cultural liaison for the group while on the lookout for rare birds, especially the Asian Great Bustard – the heaviest bird capable of flight and subject of her long-term conservation research.

The team – guided by experienced snow leopard researchers Sergei Spitsyn from Arkhar/Altaisky State Nature Reserve, Mikhail Paltsyn from World Wildlife Federation-Altai Sayan and The Altai Project’s director, Jennifer Castner – was hiking in a mountain range close to the Mongolian border to download images from motion-sensing cameras that have been deployed in the area for two years.

After viewing images of a snow leopard clicked that very morning by the cameras, a smaller group comprised of Kessler and three members of the Wild Altai expedition continued to hike and eventually stopped for a drink of water. Kessler scanned the surrounding mountains with her binoculars out of habit.

“The first thing I noticed was a pair of pointy ears on top of a ridge less than 200 meters from us,” Kessler says. “Since I work with birds, my first thought was that they might belong to an owl. But on closer inspection, I saw the silhouette of a cat on the ridge-top. We were looking directly at each other.

“Once I was certain of what I was seeing, I told the rest, 'You are not going to believe this, but there is a snow leopard on that ridge.' My companions grabbed their binoculars, took a look and started yelling with joy. The cat continued to look at us for a few moments, then slowly walked further up the ridge and out of sight.”

A step closer to understanding the extraordinary snow leopard

According to the International Union for Conservation of Nature and Natural Resources, the Russian snow leopard is threatened by illegal poaching for hides and bones, poor anti-poaching enforcement and predator-prey conflicts.

Castner was also able to document the big cat with her camera before it disappeared; the images are only the second of the creature to be taken by a live observer in Russia. She asserts that conserving native wildlife in the Greater Altai region is of utmost importance.

“Human development and the natural environment in the Altai Republic are struggling to coexist,” Castner said. “On one hand, we have an incredibly well-preserved remote wilderness that serves as a habitat for snow leopards, argali sheep and other threatened species; on the other, a boom in tourism has led to increased development and human presence in sensitive natural areas. Our goal is to encourage sustainable community development and protect endangered species in the region.”

“I had considered trying to take a photograph but didn’t want to waste precious time fumbling with my camera. I knew that these few seconds were my only chance to observe this cat in a natural setting. As a biologist and naturalist, I wanted to take in as much as I could about its appearance, gait and behavior – a memory that will last a lifetime.”

Arizona State University and the Arizona Diamondbacks are hosting an ASU Night at Chase Field on Aug. 27. Tickets are specially discounted for all ASU students, faculty and staff.

Arizona State University and the Arizona Diamondbacks are hosting an ASU Night at Chase Field on Aug. 27. Show your Sun Devil pride by wearing your maroon and gold as the Diamondbacks take on the San Diego Padres, starting at 6:40 p.m. Tickets are specially discounted for all ASU students, faculty and staff.

The following seating options are available:

To purchase tickets, click here and use the special offer code: devils.

For any accessible seating or groups of 12 or larger, contact Diamondbacks representative Daren Heaton at (602) 462-4233 or dheaton@dbacks.com.

1. Click on the link provided.
2. Select your game.
3. Next screen: leave the email box blank; put in special offer code.
4. Next screen: create a Ticketmaster account (box is on the right) – only need to do this one time OR put in the information for your existing ticketmaster account (this is where the tickets will be e-mailed, so a personal account may be used).
5. Next screen: select number of tickets and use the drop down for the seating location.
6. The best available seats for the criteria are chosen and you can approve and move on to the purchase screen.