Two professors are 1st ever Berlin Prize Fellows from ASU

Monica Green had just finished editing a volume on the Black Death when in the spring of 2014, the Ebola virus outbreak erupted in West Africa. 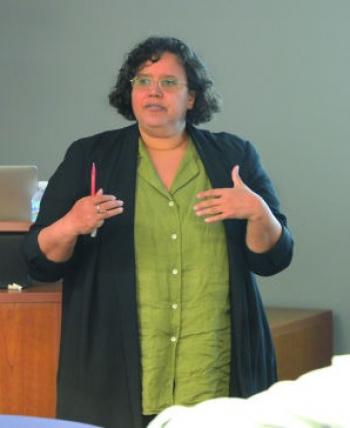 During her semester in Berlin, ASU history professor Monica Green will focus on turning her historical analysis of the disease landscape into a book, tentatively titled “A Global History of Health.” Photo courtesy of Zach Schaffer/The Pitt News. Download Full Image

As the number of people succumbing to the disease grew, it became clear to the ASU history professor that there was a dire, worldwide need for a resource that could help people understand diseases and how to deal with them.

“People (at both local and global levels) were paralyzed by not having a conceptual framework for thinking about this disease and how to react to it in a 21st-century context,” Green said.

“I realized that I simply couldn’t wait any longer before putting forward my historical analysis, which – I believe – helps us make better sense of disease in the present-day world by understanding why the disease landscape today looks the way it does.”

Luckily for Green, a professor in the College of Liberal Arts and Sciences, she will have plenty of time to hunker down this fall and turn that historical analysis into a book, tentatively titled “A Global History of Health,” during her semesterlong fellowship at the American Academy in Berlin.

Green and ASU art history professor Corine Schleif share the honor of being the first two Berlin Prize Fellows chosen from Arizona State University. Schleif – who, like Green, specializes in medieval history – will attend the academy for the spring 2016 semester.

Also like Green, Schleif is passionate about the role history, specifically art history, plays in informing the present and future.

“There’s this idea that a piece of art always says the same thing because, once it’s finished, it stays that way forever,” said Schleif, a professor in the School of Art, within the Herberger Institute for Design and the Arts. “But art actually has the ability to participate in society throughout the centuries.”

During her semesterlong fellowship, Schleif will be working on a book about Adam Kraft, a 15th-century late-Gothic sculptor based in Nuremberg, Germany, whose work was appropriated by the Nazi Party some 400 years after his death.

The conscription of Kraft’s work by the Nazis, Schleif says, is just one example of how art and history endure and continue to “participate” in culture, politics and even religion.

Both Green and Schleif look forward to their respective fellowships in Berlin, as they will be joining a group of scholars, writers, policymakers and artists from all over the globe to pursue their individual work and also engage in stimulating conversation and thought.

“It’s an honor to be chosen, and I’m very flattered,” Schleif said.

Since the American Academy in Berlin welcomed its first fellows in 1998, it has become one of Europe’s most visible and effective institutions of transatlantic dialogue and has built up an extensive and enduring network in the corporate, political, academic and cultural communities in the United States and in Germany.

The academy is now accepting applications for the 2016-2017 academic year.

The Pat Tillman Foundation named former U.S. Army soldiers Jameson Lopez, an education policy and evaluation doctorate student, and Joseph Wheaton, a master’s student majoring in secondary education, on Tuesday as two of the scholars who will benefit from the more than $1.7 million in scholarships awarded to this year’s class. 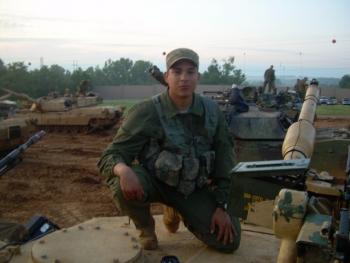 “We’re very proud to have two of our ASU students selected as Tillman Scholars this year,” said Steve Borden, director of ASU’s Pat Tillman Veterans Center. “Jameson and Joseph exemplify what it means to be scholars. They have an unyielding drive for academic learning, and combined with their combat veteran experience they seek to make a positive difference in the world around them.”

Lopez is a Native American from the Kwat’san (Quechan) Tribe in Fort Yuma, California. He served as an Army officer from 2008 to 2012 and led a tank platoon in Iraq, coordinating combat missions with Kurdish security forces during Operation New Dawn. With his military experience and education, Lopez aims to serve as a leader in the education field and increase access to higher education for Native American communities.

“I am extremely humbled and grateful by the fact that I was selected as a scholar,” Lopez said. “To be amongst such a group is an honor, and it challenges me to continually be the best return for those who have invested so much into my life.”

Lopez is part of a strong tradition of Native Americans serving in the military: According to the Department of Defense, more Native Americans have volunteered for military service per capita than any other ethnic groups since the American Revolution.

A Maine native and 2014 Sandra Day O’Connor College of Law graduate, Wheaton served as a sniper squad leader for the Army’s 2nd Ranger Battalion during his nearly six years on active duty.

“Looking at those selected before me is humbling,” he said. “I have impossibly big shoes to fill.”

Wheaton, who is also a Teach for America alumnus, said the scholarship will help fund the last year he has left on his master’s degree. He plans to apply his education to address education policy and lead change within the educational system.

Founded in 2008, the Tillman Scholars program supports U.S. active-duty service members, veterans and military spouses by investing in their higher education. The scholarship program covers direct study-related expenses, including tuition and fees, books and living expenses, for scholars pursuing undergraduate, graduate or post-graduate degrees as full-time student at a public or private, U.S.-based accredited institution. The selection process is highly competitive with up to 60 Tillman Scholars chosen annually.

As a university partner with the Pat Tillman Foundation, ASU takes part in the selection process, said Christian Rauschenbach, program manager at the Pat Tillman Veterans Center. This year’s committee had the tough job of choosing eight semifinalists out of 70 ASU students who applied; those eight semifinalists were entered into the national pool out of which the Tillman Foundation chose its 60 scholars.

“Joseph and Jameson’s applications definitely shone through as part of this process, and we are glad to see the Tillman Foundation confirm that,” Rauschenbach said. “My congratulations goes out to them both.”