In pre-computer times, engineers, environmental planners and scientists alike relied heavily on detailed topographic maps to do everything from plan projects to survey areas at risk of flooding or landslides.

But neither the traditional topographic map nor even the current digital equivalent tell us everything we’d like to know about terrain and how it changes over time. The U.S. Geological Survey is now seeking to develop richer geographic information sources. 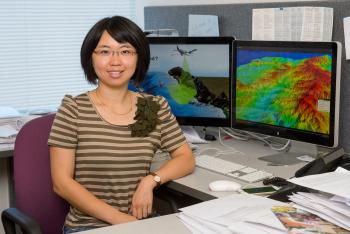 The aim is to develop a methodology that automatically identifies features and their characteristics. For example, we’d not only know the boundary of a lake, but its shape, length, surface elevation and deepest point, and the land form or man-made structures that surround it.

The real-world applications are many.

One example: After a landslide, the tool could be used to automatically extract changes in slope, elevation and shape of the terrain. These characteristics could be compared to those of other landslides, and the cumulative knowledge could assist in identifying other locations at risk for landslides.

Another possible application is in the world of geology, where the new tools and data could support discovery and research of new terrain features both on Earth and other planets.

“The vision is that terrain features could be regenerated based on the machine-learning tools we’re developing,” Li said.  “This will allow us to assess change over time, and quantitative comparisons between similar geographic features.”

Imagery gathered by satellites will be a key source of data. In addition, unmanned vehicle technologies such as robotics and drones offer new opportunities to collect previously unavailable data.

The new machine-learning tools, used together with these new data sources, could provide a way to automatically detect, monitor and quantitatively describe the changes of terrain features over time.

In attacking this problem, Li – a professor in the School of Geographical Sciences and Urban Planning – is applying cutting-edge developments in computer science to the geographic realm. “Deep learning” or “deep machine learning” is an artificial intelligence method that tries to mimic how the brain works, in order to give computers powers similar to the human brain.

Deep-learning methods are behind technologies ranging from web search to speech and facial recognition. As the power of computers increases, deep learning can generate inferences in a way that better resembles the way the brain processes. It has potential to transform the process of identifying three-dimensional features as radically as computer-based searches have transformed how we look for text-based information.

“There is no existing solution that is intelligent enough to automatically accomplish this task,” Li said.

“Deep learning has a remarkable ability to derive patterns from complicated or imprecise data, have an ability to learn, are strongly self-organized, and can create their own representation of the knowledge received. Because of this, I hope to introduce this new research area into geography to support terrain research.”

“This is a very challenging and exciting project. If we can solve even some of the problems involved, this will be a major step towards being able to create a digital version of Earth and its changing environment for future generations.”

In addition to serving as principal investigator for this project, Li is principal investigator for three National Science Foundation grants. These include “Building a Polar Cyberinfrastructure Portal to Support Sustained Polar Sciences” (2014-2015) and “PolarGlobe: Powering up Polar Cyberinfrastructure Using M-Cube Visualization for Polar Climate Studies” (2015-2018).  In addition, she is also winner of a 5-year National Science Foundation CAREER Award, “CAREER: Cyber-Knowledge Infrastructure for Geospatial Data.”

The School of Geographical Sciences and Urban Planning an academic unit of the College of Liberal Arts and Sciences.

ASU Insight: Our Children Are Not For Sale - St. Paul

ASU Insight: Our Children Are Not For Sale - St. Paul 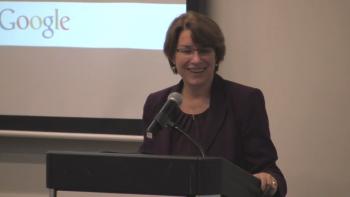