Designing new urban centers to be more efficient and updating old ones has become the focus of many urban planners and architects in the past two decades.  Planners now take into account a myriad of new factors that that were not considered important until just recently, such as street level temperatures and heat-reducing building materials.

What has prompted this change in urban design considerations?  Arizona State University's own professor emeritus, Anthony Brazel, may have been a major driving factor in the transition. 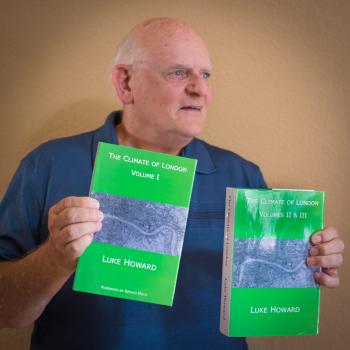 Brazel, who retired in 2011 after 37 years at ASU, is an expert on urban climatology, specializing in arid environments like the greater Phoenix area. He has spent decades conducting research in this field working to expand knowledge on the subject, and increase awareness around the effects of urban centers on natural climates.  Many other experts in the field consider his work foundational.

“You can’t start learning about urban climates in arid regions unless you start with Tony’s work. He is the preeminent scholar in this domain,” said Matei Georgescu, a colleague of Brazel’s and an assistant professor in ASU’s School of Geographical Sciences and Urban Planning.

The significance and diversity of Brazel’s research in urban climate is widely recognized.  In the last 10 years he has received two prestigious awards in recognition of his contributions and achievements. In 2013 he was awarded the American Meteorological Society’s Helmut E. Landsberg Award, and he is the 2015 winner of the International Association for Urban Climate’s Luke Howard Award.  Both awards note the fundamental nature of Brazel’s research on urban heat islands and desert environments.

“I owe these honors to supportive colleagues at ASU, and the creative environment that they helped to foster.” said Brazel.

Brazel’s work has influenced the direction of several high-profile ongoing research grants at ASU, including the Central Arizona-Phoenix Long-Term Ecological Research project (CAP LTER) and the Decision Center for a Desert City (DCDC).  Brazel’s contributions to these projects during their early stages helped solidify their longevity.

"From the very beginning, Tony Brazel had a tremendous impact on CAP LTER and DCDC, two of our largest urban sustainability research grants of the past two decades,” says Charles Redman, founding director of ASU’s School of Sustainability. “He rightly pointed to the recent and huge impact humans were having on local climate. He introduced us all to the concept of an urban heat island, which has been a central focus of both projects from that day forward."

These two grants have become vast in their scope.  CAP LTER currently involves a variety of projects related to urban climate. Recent research efforts range from investigating the ecological and economic impacts of the Phoenix area’s artificial lakes to looking into how landscape design and irrigation methods affect microclimate, soil nutrient fluxes, and bird and insect activity.  DCDC has produced a wealth of policy-relevant research related to sustaining water resources in arid urban environments like the Phoenix area.  Compared to the data available on urban climate topics 30 years ago, today’s data is hyper-focused and covers a broader range of topics.

“One trend I’ve seen over the past five years is that researchers are trying to represent urban processes at finer and finer scales,” said David Sailor, another colleague of Brazel’s who will begin a position at ASU in January 2016, where he will lead a new urban climate initiative.

Sailor, like Brazel, has worked extensively on quantifying the causes and prospects for mitigating the urban heat island effect. His current research projects explore potential for mitigating indoor and outdoor thermal environments and air quality with an emphasis on vulnerable elderly populations.

“David Sailor’s work to test and develop new technologies and strategies for high performance buildings, with a focus on energy efficiency and urban climate interactions, is extremely important to goals at ASU,” said Brazel.

ASU remains dedicated to attracting researchers with a focus on urban climate; in addition to Sailor, two key players are Matei Georgescu and a recent hire, David Hondula.   Georgescu focuses on identifying hydro-climatic and air quality impacts resulting from large-scale urbanization, and is currently leading several large research efforts that explore potential adaptation and mitigation strategies.  David Hondula researches the societal impacts of weather and climate with an emphasis on extreme weather and health, and is partnering with the Arizona Department of Health Services and the Maricopa County Department of Public Health to find ways of reducing unnecessary weather-related illnesses and deaths.

Knowledge that urbanization impacts climate is now part of our culture. That was not the case when Brazel began his career.  Brazel’s foundational research helped to build knowledge about urban climates in desert regions from the ground up.

ASU has continued to be a leader in this area, and is poised to continue Brazel’s legacy by training a new generation of researchers who look not only at the impacts of urban climate but at strategies for adapting to the impacts.

Longing for the perfect evening of awe-inspiring music, led by internationally recognized conductors and performed by your ASU Symphony Orchestra? Our free concerts offer everything from contemporary works by living composers to masterworks by Shostakovich, Mahler and Stravinsky. And don’t miss the breathtaking talents of some of the School of Music’s top student musicians in the Concert of So...

Longing for the perfect evening of awe-inspiring music, led by internationally recognized conductors and performed by your ASU Symphony Orchestra? Our free concerts offer everything from contemporary works by living composers to masterworks by Shostakovich, Mahler and Stravinsky. And don’t miss the breathtaking talents of some of the School of Music’s top student musicians in the Concert of Soloists.

“This entire series of concerts is an exciting one, and the opportunity for our students to interact with these masterworks under the guidance of celebrated guest conductors makes this season truly unique,” says Jason Caslor, interim director of the ASU Symphony Orchestra. 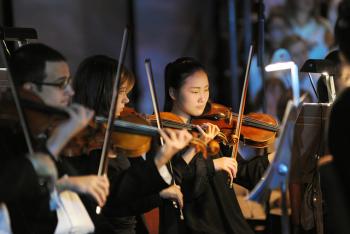 Maestros taking the podium this season include Carl St. Clair, Karina Canellakis and Tito Muñoz. All three will bring their expertise and passion for orchestral repertoire to campus, continuing the tradition of exceptional guest artistry at the School of Music.

“As a student and future teacher of the arts, the dedication, experience and unwavering artistic sensitivity of our conductors has already left me a better musician,” says Kiefer Strickland, a masters in bassoon performance student and member of the orchestra. “I truly look forward to our upcoming concerts with the guest conductors, and know that the constant flow of inspiration will help hone my craft.”

ASU Symphony Orchestra: Alive and Kicking – March 2, 2016
Jason Caslor, new associate director of bands and orchestras, leads a concert featuring composers who are alive and well. Highlights include the suite from “There Will Be Blood” by Radiohead’s Jonny Greenwood and “Danzon No. 2” by Marquez.

All concerts are free and will be held at 7:30 p.m. in ASU’s Gammage Auditorium, on the Tempe campus.