The Arizona State University Police Department is joining other police agencies across the nation in signing the “Start by Believing” proclamation in support of victims of sexual violence.

“Many sexual violence victims feel that the very people that they turn to for help often don’t believe them and are critical of them," said Daniel Macias, Arizona State University Police Sergeant. "This only serves to further their victimization. This is a message of support for those survivors, one that we hope will encourage them to report offenses and allow the system to hold the offender accountable.

"We’re also the first university police department in Arizona to sign the proclamation.”

Start by Believing is a public awareness campaign designed to change the way we respond to rape and sexual assault in our communities. Because a friend or family member is typically the first person a victim confides in after an assault, each individual’s personal reaction is the first step in a path toward justice and healing. Knowing how to respond is critical – a negative response can worsen the trauma and foster an environment where sexual assault predators face zero consequences for their crimes. ASU’s proclamation is signed by President Michael Crow and Police Chief John Pickens.

The campaign by End Violence Against Women International seeks to stop the cycle of crime, since rapists attack an average of six times. Therefore, a failed response can equal five more victims, according to the Start by Believing website.

The public awareness campaign started to bring attention to victims of sexual assault, and not revictimize them through disbelief when they report the crime. Disbelief may come from friends, family, nurses, law enforcement or others whom the victim normally would expect to support them.

“Sometimes victims will come forward and they may not be believed or are told they brought it on themselves,” Macias said. “There are many instances that aren’t reported because of fear of being told that someone brought it on themselves. This type of thinking needs to change. We need to start by believing victims of sexual assault when they come forward. It’s traumatic enough.”

Signing the proclamation coincides with Sexual Assault Awareness month in April. Events at ASU include a lunch presentation on healthy relationships, free testing for sexually-transmitted diseases, a sexual health fair, queer health care and self advocacy, and sexual assault prevention and response. More information about events may be found at http://www.sexualwellnessweek.com/events.

The film "Eufronisa’s Revolution" documents one woman's crusade for the rights of women and indigenous people in rural Mexico.

“Eufronisa’s Revolution” tells the story of a woman, denied the mayor’s position in a small Mexican town because of her gender, who became a grassroots activist for the rights of women and indigenous communities.

The documentary film, described by Variety as stirring and well-crafted, will be screened Monday, April 14, at ASU’s West campus, with the screening preceded by a reception and a discussion with its director. 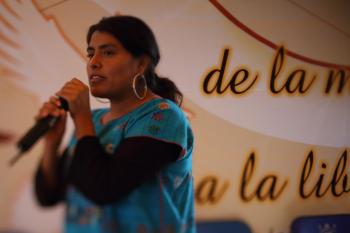 Events begin from 5-6 p.m. with a reception featuring filmmaker Luciana Kaplan, the director of “Eufronisa’s Revolution.” The reception will take place in the Barrett Honors Suite, room 201 of the University Center Building on the West campus, 4701 W. Thunderbird Road in Phoenix.

From 6-7 p.m., Kaplan will talk about documentary filmmaking in Mexico and the political trajectory of the film’s protagonist, Eufronisa Cruz Mendoza, who became one of the first indigenous women in the Mexican House of Representatives. The discussion is set to take place in the Kiva Lecture Hall, in the University Center Building.

The screening of “Eufronisa’s Revolution” is also scheduled in the Kiva Lecture Hall, from 7-9 p.m.

All events are free and open to the public. Visitor parking on the West campus costs $2 per hour.

“The story of Eufronisa Cruz Mendoza is remarkable and inspirational,” said Ilana Luna, assistant professor of Latin American studies in ASU’s New College of Interdisciplinary Arts and Sciences, the core college on the West campus. “She responded to her 2007 mayoral defeat in her village in Oaxaca, based solely upon her gender, by becoming a tireless crusader for gender and social equity. We are pleased to bring Luciana Kaplan to the Valley to share this story and discuss filmmaking in modern Mexico.”

New College is sponsoring the April 14 events along with its master’s degree program in social justice and human rights, and Center for Critical Inquiry and Cultural Studies. Barrett, the Honors College at the West campus is also a sponsor. Additional support is provided by ASU’s School of Social Transformation.

The event is produced by the cross-campus feminist collective Entre NosOtr@s, whose members include students Yessica del Rincón, Ana Terminel Iberri and recent graduate Vanessa Nielsen de Molina, as well as faculty, including Luna, Michelle Tellez and Marivel Danielson. It is part of a larger collection of events produced by Entre NosOtr@s this academic year, including a “translocal” women’s Son Jarocho concert, workshop and discussion of musical performance and gender with musical collective “Entre Mujeres” in the fall, and a one-woman play and workshop by Chicana playwright Monica Palacios in the spring.

The April 14 film screening follows ASU’s fourth annual Human Rights Film Festival, to be held April 11-13 in Armstrong Hall on ASU’s Tempe campus. Luna will facilitate a discussion with Kaplan after a screening of the film on April 12.