The Arizona State University Police Department announced this month the promotions of two assistant chiefs and the promotion of three officers. 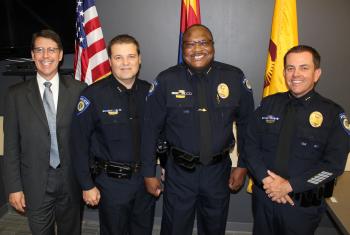 “Commanders Hardina and Thompson began their assistant-chief positions armed with valuable, institutional knowledge of ASU and the department,” said John Pickens, ASU Police Department chief. “While we conducted an extensive search, we found the right individuals here within our ranks. I am certain that all of our newly promoted officers will make significant, positive impacts within the department and university community. They will assist me to provide professional leadership and build partnerships to provide a safe environment.”

Due to the shift in leadership positions, two current ASU Police Department sergeants, Michele Rourke and Louis Scichilone, were promoted to commander rank, and Corporal Jason Latella now is a sergeant.

Each ASU Police Department officer who moves forward in a new role brings years of expertise and a distinctive outlook to his or her new post. In their own words, they describe what their new responsibilities mean to them.

Hardina joined the ASU Police Department in May of 2000 as a police officer. He was promoted to corporal in February of 2004, to sergeant in July of 2004 and to commander in June of 2007. He has served as sergeant in patrol and investigations, department public information officer, and operations commander at the ASU Tempe, Polytechnic and Downtown Phoenix campuses. Hardina actively has been involved in promoting awareness about sexual-assault initiatives and neighborhood focus areas where officers are assigned to specific campus areas. He was instrumental in implementing social networking to members of the community through the ASU PD Facebook and Twitter pages.

"I’m looking forward to serving the Arizona State University community with added responsibilities as an assistant chief as we continue to make the ASU Police Department an exemplary agency focused on the safety of students, faculty and staff,” Hardina said. “In my new position, I’ll work to develop additional relationships with university and community partners that ensure that our officers become even more involved in the university community that they serve. It’s an honor to be part of ASU and our police department.”

Hardina is a graduate of the FBI National Academy, Session 235, LINAU (Leadership in the New American University): Mastering Leadership and has completed numerous law enforcement-related training courses. He received a bachelor’s degree from Arizona State University and currently is working towards a master’s of administration/leadership.

Thompson joined the ASU Police Department in May 2008. He previously spent 20 years with the Mesa Police Department in a variety of assignments, including sergeant, (patrol, jail, bike unit, community action, advanced training, school resource officer, lead instructor) detective and forensic artist. Thompson has served as commander at the ASU West campus and currently works as commander, administrative division, at the Tempe campus. He also implemented the ASU Police Honor Guard.

“The position of assistant chief truly is an honor that carries a responsibility I do not take lightly. I recognize, and look forward to the work ahead of me, and I am dedicated to that cause,” Thompson said. “I welcome the opportunity I will have to work with our university community and surrounding areas toward the common goal and challenges we have of making our students, faculty and staff successful academically as well as personally and professionally. The Arizona State University Police Department is nationally known for its professionalism and dedicated personnel and I am extremely proud to be a part of that.”

Rourke joined the ASU Police Department in 1994 as a police officer. She was promoted to corporal in 1998 and to sergeant in 2006. She was recruit-training officer at the Arizona Law Enforcement Training Academy from June 2000 to May 2001 and November 2005 to March 2006. She served as the special events coordinator/fleet manager from July 2003 to November 2005. Rourke worked as interim sergeant from May to November 2006 and as interim commander from September to December of 2008. Since 2009, she has served as administrative sergeant. She has been very active in training and has eight years of experience as field training officer.

“Since I’ve been at the university for the past 18 years, Arizona State has become an important part of my life,” Rourke said. “I’m looking forward to helping the ASU Police Department grow in alignment with the aspirations of the New American University that is committed to excellence, access and impact. I’m excited and pleased to be promoted to commander and to help meet the challenges to continually improve the department and strive for excellence in everything we do.”

Rourke has a bachelor’s degree in business administration from Nazareth College and has completed numerous law enforcement-training courses.

Scichilone joined the ASU Police Department in the campus assistants program as a lead supervisor in 1996. He became a police officer in May of 2000. Upon completion of the Arizona Law Enforcement Academy, he was assigned to patrol operations. Scichilone was promoted to corporal in December 2004 and to sergeant in November 2006. He served as detective from 2004 to 2006. He successfully wrote a $200,000 grant that was used to upgrade the department’s Computer Aided Dispatch/Records Management System. He currently serves as the department’s DUI Task Force coordinator. Scichilone was interim commander at the ASU Polytechnic campus from December 2010 to April 2011 and most recently at the Tempe campus. Scichilone was recognized as Supervisor of the Year for 2011. He also was recognized for participation and charitable contributions to the ASU Police Holiday Toy and Food Drive.

“This promotion is the culmination of years of hard work and I couldn’t be happier with this opportunity for personal and professional growth,” Scichilone said. “I wish to use this experience to make meaningful contributions to both my agency and this community. I have always strived to be a productive member of this department and will continue to serve as a positive example for others. I have worked with this agency for over 15 years and I understand the unique challenges that we face. I am proud to have been given this chance to assume a new leadership role and look forward to many more productive years here at ASU.”

Scichilone received a Bachelor of Science in Justice Studies/Computer Science from Arizona State University. He is working toward a master’s degree in administration/organizational management from Northern Arizona University. He has completed numerous law enforcement-related trainings.

Latella joined the ASU Police Department in November 2004 and was promoted to corporal in November of 2007. He previously was a field-training officer and currently is assigned to investigations.

“I’m looking forward to the new challenges that the position of Sergeant provides,” Latella said. “I’ll have the opportunity to interact with the university community on a personal level and stay better connected with what is happening at ASU. After working at the university for the past eight years, I’ve come to appreciate the size and scope of our department that offers opportunities to work in varied areas and learn many new skills.”

Latella received a Bachelor of Arts degree in Anthropology from Arizona State University and has completed numerous law enforcement-related courses.

The opportunities are a result of McDonald recently winning an award in the DOE’s Innovation in Fuel Cycle Research Awards competition. 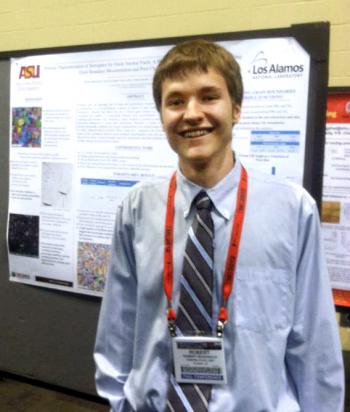 The award is based on research he presented last spring at an annual meeting of the Minerals, Metals and Materials Society from his report titled “Porosity Characterization of Surrogates for Oxide Nuclear Fuels: A Statistical Analysis of Correlations among Grain Boundary Misorientation, Pore Character and Location.”

McDonald conducted the research described in his report under the direction of Pedro Peralta, a professor of aerospace and mechanical engineering in the School for Engineering of Matter, Transport and Energy, one of ASU’s Ira A. Fulton Schools of Engineering. He will continue the work as part of Peralta’s research group as he pursues a master’s degree in materials science and engineering.

McDonald is examining trends in porosity found in sintered nuclear fuel pellets. Sintered materials are materials formed into a mass by heat and pressure.

Learning more about porosity is important for improving knowledge of the life cycle of nuclear fuel pellets. Understanding the initial conditions of pores in the pellets enables engineers to do more precise simulations and modeling of the pellets’ behavior when they are inserted in a nuclear reactor and while they are being processed.

The research is part of a larger project to determine the relationships between fuel-pellet processing conditions and the pellets’ microstructure and material properties. It’s a key step toward better understanding the optimal microstructure for oxide nuclear fuels. That knowledge is necessary to reduce the amount of radiotoxic materials that can be released during accidents, and to improve the durability and reliability of these fuels.

The DOE’s Innovations in Fuel Cycle Research Awards is part of the agency’s efforts to help advance development of sustainable nuclear energy technologies by encouraging students to pursue fuel-cycle research.

In addition to the research presentation opportunities, McDonald received $1,500 as part of the award.