The Biodesign Institute at Arizona State University and Pohang University of Science and Technology (POSTECH) in Pohang, South Korea, have announced a partnership that will catalyze discoveries with a major impact on health care and clean energy applications.

Scientists at both universities will work together to outfit a powerful new facility, the X-ray Free Electron Laser at the Pohang Accelerator Laboratory (PAL-XFEL), to discover and understand important biological molecules for new health care and renewable energy research. 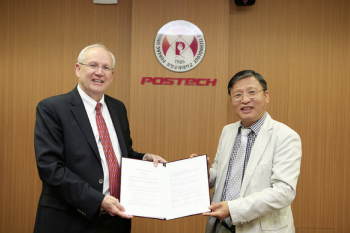 “POSTECH’s rapid rise as a world-class research institution makes them an exceptional partner to move this research ahead,” said Raymond DuBois, executive director of the Biodesign Institute. “The ASU-POSTECH collaboration will tackle a wide range of urgent biological problems, from accelerating the pipeline for new drug discovery and development to battle cancer and infectious diseases to unraveling the secrets of photosynthesis to make cheap and efficient worldwide renewable energy production a reality.”

“This new partnership with ASU would speed up the transformation of innovative research into real-world solutions,” said Yongmin Kim, president of POSTECH, which was the first research-oriented university in Korea and has been the No. 1-ranked university in the world under 50 years old from 2012-2014. “Founded upon a mission to serve the nation and humanity, POSTECH places strong emphasis on new value creation through education, research and commercialization endeavors in collaboration with industry.”

The outcomes of this research are expected to inspire the next generation of scientists, train a highly skilled work force, launch new businesses and create high-wage jobs in both South Korea and the U.S.

Kim recently visited ASU, meeting with faculty and administrators to learn more about ASU, including research in electrical and computer engineering for medical imaging and consumer health care. A graduate of the University of Wisconsin and former chair of the University of Washington’s Department of Bioengineering, Kim is a distinguished researcher with more than 450 publications and about 75 patents.

A Biodesign delegation visited POSTECH earlier this year, signing a Memorandum of Understanding, meeting with faculty of common research interests, and taking a tour of POSTECH’s research infrastructure including the POSTECH Biotech Center and PAL-XFEL.

The $400 million PAL-XFEL facility, set to begin commissioning in early 2016, is being designed and built by a team led by In Soo Ko. It will become just the third of its kind in the world, after the Linac Coherent Light Source (LCLS) at Stanford University and the Spring-8 Angstrom Compact free electron Laser (SACLA) in Hyogo, Japan.

“When LCLS and SACLA were built, the significant impact XFELs would have on biology research wasn’t known, so there is a unique opportunity today to make the PAL-XFEL a premier destination for biological research with free electron lasers,” said Petra Fromme, director of the Biodesign Center for Applied Structural Discovery, who will lead the ASU team.

Fromme is a biochemist with more than 20 years of experience in the field of membrane protein X-ray crystallography, a variation of the same technique that was used to help solve the structure of DNA. She leads a team of researchers at ASU, along with distinguished international collaborators, who helped pioneer the use of XFELs for biology research in 2009.

XFEL science has the potential to change the way we understand structural biology, a scientific field that combines chemistry, physics and biology to understand the inner workings of key molecules and processes of life at an unprecedented, atomic level scale. XFEL technology opens the door to new levels of understanding because the X-ray source is more powerful (up to 10 billion times stronger) than conventional sources, enabling researchers to view molecular dynamics at a time-scale never before observed.

The joint ASU-POSTECH venture will also entail a vibrant exchange of ideas that is facilitated through joint conferences, colloquia and symposia, joint publications and intellectual property and by cross-training students and researchers to be future global scientific leaders.

“POSTECH’s trailblazing accomplishments as a home to more than 70 research institutes, coupled with ASU’s pioneering work in structural biology and XFEL creates a powerful partnership that will have significant impacts,” said Sethuraman “Panch” Panchanathan, senior vice president of Knowledge Enterprise Development at ASU. “These will range from scientific discoveries to educating the next generation of scientists to advancing the economies in both of our countries.”

California transfer student over the moon about space school at ASU

Eric Laughlin was looking for a place to pursue his passion for astronomy and physics when a friend turned him onto ASU's School of Earth and Space Exploration and he found his future.

California transfer student over the moon about space school at ASU

You could say Eric Laughlin was starstruck during his search for a university. 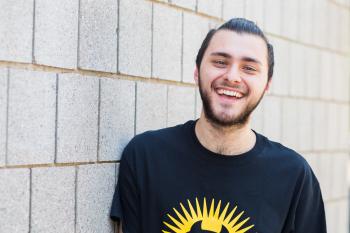 It might be more accurate, however, to say he was space-struck.

The student from Burbank, California, was wrapping up his community college studies at Pasadena City College and wanted to find somewhere he could pursue his passion for astronomy and physics.

The public California schools he looked into didn’t have what he was searching for.

“None of them really did – I was surprised,” he said. “The UC system is so large, I thought there would be more opportunity. Especially since you have JPL (NASA Jet Propulsion Laboratory) there and the space center up in northern California.”

A friend who was also ready to transfer suggested they look at Arizona State University because she knew people there. Laughlin discovered ASU’s School of Earth and Space Exploration, and he was sold.

“Once I found the program at ASU, I was dead-set on coming over here,” said Laughlin, who will have a concentration in astrophysics and already has a JPL internship lined up for next summer.

Astronomy was never a family interest in his home growing up. His father works in construction, his mother in the medical-malpractice field. When he graduates, he’ll be the first person in his family to finish a college degree other than his uncle.

Laughlin had looked at other fields of study such as law and biology, “but they never spoke to me as much like this does,” he said. He joined the astronomy club at Pasadena City College, toured JPL — “It was like going to Disneyland” — and went to other space events, solidifying his love for the subject.

Laughlin moved to ASU at the start of the summer and has already taken his first ASU class, an Anthropology for Science and Mathematics course online. And his frequent drives from Tempe to Las Vegas, where his boyfriend moved recently, have presented star-laden skies the LA-area native isn’t used to.

“I’ve looked up at the sky and seen way more than I’ve ever seen before,” he said.

But it’s not just the science that has Laughlin excited about being at ASU. After attending small private schools growing up and then living at home during his community-college years, this is one student excited to jump into campus life.

“Probably because it’s a very big school, and a public school too, the population is a little more diverse,” he said of ASU. “That’s really appealing.”

Also appealing is finally living on his own, at age 23, in the Vista del Sol campus apartments.

“It’s like I’m living my own life — even though my parents are still helping me out,” he said.

In between jobs at the campus bookstore and at a Sephora in Gilbert, Laughlin has connected with other incoming students thanks to Devil 2 Devil, a social-networking site for incoming ASU students. He even organized a meetup for transfer students.

Though he admits he is going to miss the beach, the self-proclaimed foodie is excited to explore Arizona and already has gone tubing on the Salt River — his verdict: “awesome.”

Oh, and that friend who suggested they look into ASU? She ended up not coming here, but Laughlin thanks his lucky stars she pointed him this way.