Beginning in 1958, NASA’s Project Mercury was conceived as a bold experiment to give the United States its first human spaceflight experience, develop techniques and hardware for more ambitious space endeavors, and evaluate whether astronauts could safely function in space. The Mercury program was highly successful, yet the whole Mercury image collection has rarely been seen by the public – until now. A team of scientists led by Arizona State University Professor Mark Robinson is bringing these historic flights to life by making high-resolution scans of the original Mercury flight films.


On 5 May 1961, Alan Shepard became the first American in space aboard the Freedom 7 spacecraft. To celebrate the fiftieth anniversary of this milestone, the NASA Johnson Space Center (JSC) and the School of Earth and Space Exploration at ASU have released the Project Mercury Online Digital Archive. In this new digital archive, high-resolution scans of the raw and enhanced versions of the original Mercury flight films are available to both researchers and the general public, to browse or download, at: http://tothemoon.ser.asu.edu/. 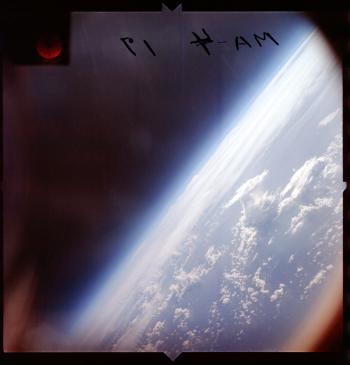 
“It was a real privilege to lead up this effort, especially working with the dedicated professionals at JSC who handled and scanned the images with the greatest care,” says Robinson, a professor in the School of Earth and Space Exploration in ASU’s College of Liberal Arts and Sciences. Robinson, the principal investigator for the Lunar Reconnaissance Orbiter Camera, a suite of three separate cameras on board NASA's Lunar Reconnaissance Orbiter, is also partnering with JSC to scan the original Apollo films, which are being posted online since scanning started in 2007.


Robinson’s team received the raw scans from JSC, and ASU was responsible for the processing and archiving of the scanned photographs. Among the steps taken to improve the visual quality of the images was the adjustment of contrast and the enhancement of colors. According to Robinson, once he had worked out a procedure it only took a few seconds of processing per image. Of course, a handful of the images did need individual “hand processing” and thus took longer.


Between 1960 and 1963, NASA launched numerous unmanned and six manned Mercury flights. To record their historic voyages and collect scientific observations from Earth’s orbit, astronauts snapped nearly 2,000 photographs in 70 mm format with handheld and automated cameras. Many of the images (specifically those from the unmanned flights) were taken with cameras mounted on brackets looking out the window on a timer. Robinson’s team assembled these into movies and they are posted on the webpage also.


The collection of scanned images, most taken with the Swedish designed Hasselblad 500c camera that was first introduced in 1957 and renowned for its clarity, are now available in high-resolution for scientists, engineers and the public. After the missions returned to Earth, the films were developed and stored at JSC.


“When the first scans arrived I was surprised to see writing on the images,” says Robinson. “At first I was appalled – these images are part of history, how could somebody have written on them? Then it dawned on me – these were engineering test flights, the imperative was to get an American into space. Analysis of the images far outweighed any historical imperative; the Mercury team was pushing towards the project goals! Now I see the notations as dedication to the cause, a signal of the urgency to succeed.”


A Time to Remember


As we start the 10th year of a permanent human presence aboard the International Space Station and the sixth decade of American spaceflight, it is hard for many people to remember that there was a time when we simply didn't know whether humans could live and work in space.


The first Mercury flight named Freedom 7, piloted by http://www.jsc.nasa.gov/Bios/htmlbios/shepard-alan.html" target="_blank">Alan Shepard, lasted a mere 15 minutes. Shepard was launched 100 hundred miles into space and then fell back to Earth into the Atlantic Ocean. The flight, though short, was a huge relief. At the time the Soviet Union had orbited a cosmonaut (April 12, 1961), Yuri Gagarin, about the Earth while the United States was having problems getting rockets off the pad without an explosion. The American public was deeply concerned that the United States had indeed fallen behind the Soviet Union in the realm of rocketry, and technology development in general.


Less than three weeks after Shepard’s flight (May 25, 1961) http://history.nasa.gov/moondec.html" target="_blank">President Kennedy challenged America “to send a man to the Moon and return him safely to Earth” by the end of the decade. With only fifteen minutes of manned spaceflight experience to build upon, sending a man to the Moon in this short time frame was an audacious goal. Project Mercury was followed by the successful http://www-pao.ksc.nasa.gov/history/gemini/gemini.htm" target="_blank">Gemini Program and then, of course, the http://history.nasa.gov/apollo.html" target="_blank">Apollo Program, which fulfilled Kennedy’s challenge. Today, the other unmanned and manned Mercury flights are mostly forgotten; however, each flight played a critical role in NASA’s early efforts to learn to fly in space.


“The fiftieth anniversary of Alan Shepard’s flight presents an opportunity to reflect not only on what NASA and the United States have accomplished in terms of human space exploration, but perhaps more importantly, where do we go from here?” says Robinson.

Harris garners third honor from MPSF in her career while Smith collects her first.

The honor for Harris is the third of her career and the second earned as a Sun Devil as she was named the to the honorable mention squad while at ASU in 2010 and 2011 after earning the same honor as a freshman at the University of Pacific in 2007. Smith earned her first accolade this year.

Smith had a stellar senior season as she tied for the team lead in goals scored with 39, led the way with a single-season record 53 assists and also was the overall leader with 92 points. During the season, she tied the single-game records for points scored (nine vs. Cal Baptist) and assists (five at #20 UC San Diego). Overall, her 92 points scored (39 goals-53 assists) ranks as the second-most in a single season behind the 123 recorded by Addison">http://thesundevils.cstv.com/sports/w-wpolo/mtt/mcgrath_addison00.html">... McGrath in 2008 and makes her the only player in Sun Devil history to have two seasons with 90 or more points after she recorded 90 in 2009.

On the career ledger, Smith’s three-year career came to an end with 155 goals and 95 assists, which rank as the second and third-most, respectively, in school history. She also ranks second all-time in points with 250, making her just the third Sun Devil to record 200 or more points in a career.

Harris, one of the fastest Sun Devils in the pool with 71% of her opening sprints won, finished her senior season with 39 goals as well, tying both Smith and Mariam">http://thesundevils.cstv.com/sports/w-wpolo/mtt/salloum_mariam00.html">M... Salloum for the team lead. Harris’ 26 assists and 65 total points also ranked second overall on the squad behind the totals of Smith. For her career, Harris finished just off the Top 10 all-time lists in Sun Devil history over her three seasons in Tempe as she collected 77 goals (five away from 10th), 40 assists (four away) and 117 points (nine away).

Last weekend, both seniors helped the Sun Devils pick-up their first MPSF Championships victory in several years as they upset No. 9 San Diego State, 11-9, in the seventh-place game. With their seventh-place finish, the No. 11 Sun Devils recorded their best finish in the tournament since taking sixth at the 2006 event. On the weekend, Smith scored 18 points on nine goals and nine assists, including a three-goal, four-assist day in a near upset of No. 4 USC (lost, 10-9) and then added four goals and three assists in the upset of SDSU, in which Harris scored twice and added an assist.