Arizona State University recently moved its Biomedical Informatics department to the Scottsdale campus of Mayo Clinic as part of the university’s deepening ties with Mayo in health care, medical research and education. 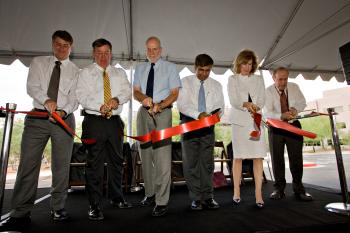 The opening of ASU’s BMI offices on Mayo Clinic’s campus was recognized Aug. 25, with a ribbon-cutting ceremony.

“Making BMI’s home at Mayo Clinic will advance biomedical informatics education and research in new and exciting ways,” said ASU President Michael M. Crow. “By doing this, we are connecting students, faculty, researchers and clinicians in ways that will lead to advancing the science, technology and usefulness of biomedical informatics.”

“We welcome the BMI program to our Mayo Clinic campus and are excited about this potential to merge the best minds in research and clinical disciplines in the pursuit of health care solutions in the age of personalized medicine,” said Wyatt Decker, Mayo Clinic CEO. “This collaboration underscores the dramatic growth in the field of biomedical informatics and its importance to unraveling the mysteries of human diseases.”

Moving ASU’s BMI department to Mayo is one of many collaborations between the two entities, including:

• a variety of collaborative research projects;

• joint work on the new Proton Beam Program; and

• sharing in development of Mayo’s new Center for the Science of Health Care Delivery.

Putting the BMI department on the Mayo campus will help it thrive, according to Sethuraman “Panch” Panchanathan, ASU’s chief research officer.

“In order to advance biomedical informatics education and research, we need to be embedded in a clinical environment,” Panchanathan said. “Mayo provides access to world-class physicians and researchers in Arizona, as well as in Minnesota and Florida. It provides extraordinary opportunities for ASU faculty and students to work in one of the top clinical facilities in the country and advance education, research and training in biomedical informatics.”

“The proximity to Mayo clinicians and researchers, and actual patient care settings will enable BMI students to identify and work closely with real-world problems in health care delivery and the underlying science,” Greenes explained. “This provides an invaluable opportunity for students, faculty, researchers and clinicians to form collaborations addressing these problems, and jointly coming up with innovations and improvements in the health care system.”

“ASU BMI has a commitment to academic research with an applied focus, and is ready and able to provide a range of faculty and student talent to work on problems of interest and relevance to Mayo Clinic, both in terms of its biomedical science goals and its health care delivery and health improvement goals.”

Keith Frey, chief medical information officer at Mayo Clinic in Arizona and a clinical professor in the BMI department, said this set up will help usher in the age of personalized medicine.

“The patient will be the ultimate beneficiary of this unique collaboration between outstanding students and faculty from ASU and the best clinical and research minds at Mayo Clinic,” Frey said. “By working to analyze a patient’s genetic profile, we begin to more precisely understand the molecular genesis of many diseases, and thereby are able to advance better treatments and cures. “

Ten international journalists and communicators are studying at the Walter Cronkite School of Journalism and Mass Communication at Arizona State University as part of the prestigious Hubert H. Humphrey Fellowship Program.

The mid-career journalists from Boznia, Brazil, China and seven other countries will spend a year at Cronkite studying journalism, receiving leadership training and forging professional affiliations with news organizations in Arizona and across the country.

The journalism fellowship program, now in its second year at the Cronkite School, is one of two in the world. The other is at the University of Maryland’s Philip Merrill College of Journalism.

Administered by the Institute of International Education, the Humphrey program is an initiative of the U.S. State Department’s Bureau of Education and Cultural Affairs.

At Cronkite, they will study under the direction of Associate Professor B. William Silcock, director of Cronkite Global Initiatives, himself a two-time Fulbright scholar.

“The Humphrey fellows bring a breath of fresh truth into our classrooms and newsrooms at Cronkite,” said Silcock, himself a two-Time Fulbright scholar. “Whether they’ve just witnessed the Arab Spring firsthand in Egypt or anchored a newscast in Maldives or updated Costa Rica’s most influential blog these professionals bring our faculty and students dispatches from the frontlines of global journalism.”

Andreza Andrade, from Brazil, has a bachelor’s degree in socio-communication and journalism from the State University of Paraiba. From 2005 to 2010, she worked as a communication and project adviser for Instituto Socioambiental, a Brazilian nongovernmental organization whose mission is to propose integrated solutions to social and environmental issues. Andrade also has worked with indigenous populations in the northwest Amazon to foster digital inclusion. She plans to develop her new media skills to further these efforts with minority populations.

Mona Abdel Alim, of Egypt, has master’s and bachelor’s degrees in political philosophy from Faculty of Arts, Alexandria University. She is head of media and coordinator of the advocacy unit for Alexandria Business Association, which monitors private-sector business in Egypt. She intends to build her leadership and multimedia skills while at Cronkite.

Lubna Benjamin, from Pakistan, has a master’s degree in international relations from Quaid-i-Azam University and a bachelor’s degree in economics and political science from Viqar Un Nisa College for Women. Since 2006, she has been an associate producer for Geo TV’s current affairs talk show, “Capital Talk.” She will study broadcast production and television news techniques.

Hao Chen, from China, has a bachelor’s degree in the Malay language from Beijing Foreign Studies University and also has studied journalism at Universiti Putra Malaysia. He is the executive editor of the International Herald Leader, published by China’s state-run Xinhua News Agency, one of the largest news agencies in the world. He will study digital media and its effects on traditional media as well as the business of journalism.

Antonio Jimenez, from Costa Rica, has a bachelor’s degree in journalism from Universidad de Costa Rica and has studied social media and English at Columbia University in New York. As executive editor for ameliarueda.com, he oversees a venture by one of Costa Rica’s leading reporters that has broken ground in convergence across media platforms. He will study new uses of mobile technology for news production and distribution.

Lejla Kapetanovic, from Bosnia and Herzegovina, has a bachelor’s degree in journalism from Faculty of Political Sciences. Since 2010, she has been an associate expert for communication at the Public Administration Reform coordinator’s office, creating internal and external communications and managing social media for an office charged with reforming public administration in the country. She hopes to improve her skills in social and digital media for use in corporate and governmental communications.

Evgeny Kuzmin, from Russia, has a specialist in journalism designation from Amur State University. He is director of the Amur.Info news agency and its website, where he leads a team of editors, programmers, designers and reporters in content production. He plans to study new media, media management and business journalism while at the Cronkite School.

Taati Niilenge, from Namibia, has a bachelor’s degree in media studies from the University of Namibia. She is a reporter at the Namibian Broadcasting Corporation. She hopes to build her social media and online media skills while at Cronkite.

Lujain Shafeeq, from Maldives, has a master’s degree in journalism from the University of Westminster in the United Kingdom and a bachelor’s degree in mass communication from Curtin University of Technology in Australia. He also holds a certificate in broadcast journalism from the Ministry of Information and Arts in Maldives. He is the communications and creative director for a company specializing in information solutions for businesses. He also is a news anchor for a private television station and lectures on multimedia journalism at The Maldives National University. He is interested in new media and communication theory.

Elena Strapkova from Slovakia has a master’s degree in economics and tourism from the University of Matej Bel in Slovakia. She is vice editor in chief of Gastro magazine, which covers travel and food for Slovakian and Czech audiences. She hopes to enhance her public relations and communications skills in order to promote her country as a tourist destination.