Held at the Walter Cronkite School of Journalism and Mass Communication on ASU’s Downtown Phoenix campus, Launch Day Downtown is part of ASU's efforts to foster a wider conversation regarding entrepreneurship and innovation within the university and local community. The event is hosted by ASU's Office of Entrepreneurship and Innovation. 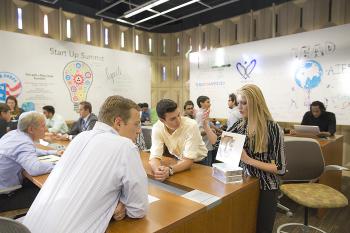 The concept of ASU Launch Days was started by the Office of Entrepreneurship and Innovation this spring. These daylong celebrations of student entrepreneurship are held on every ASU campus each semester to showcase entrepreneurship programs available to students and faculty at the university. The goal is to encourage students to participate in the ASU Incubator, apply for the Edson Student Entrepreneur Initiative and take advantage of events and programs that help students scale their ideas into successful ventures.

The first ASU Launch Day was held Feb. 5 in Tempe and introduced more than 4,000 students to entrepreneurship programs and opportunities available on the Tempe campus.

Some of the events that will take place as part of ASU Launch Day Downtown include:

Staff members from ASU’s Office of Entrepreneurship and Innovation and students from the Edson Student Entrepreneur Initiative will be tabling in the forum space to showcase student ventures; hand out t-shirts and notebooks to raise awareness of entrepreneurship services and programs at ASU; and provide one-on-one mentoring to any student who stops by to learn more about how to engage with entrepreneurship at ASU.

Students with ideas for ventures or with operating startups will pitch their idea to a panel of faculty and staff from the Office of Entrepreneurship and Innovation. Winning teams will win up to $5,000 to advance their ventures and may be invited to join the ASU Incubator. Sign up to pitch at http://sched.co/2L1f.

Mitzi Montoya, vice president and university dean of Entrepreneurship and Innovation at ASU, will join moderator Hayley Ringle from Phoenix Business Journal and a panel of influential Valley thought leaders to raise awareness about opportunities for women at ASU and to brainstorm Valley-wide solutions that support women entrepreneurs. RSVP for the panel discussion at http://sched.co/2I23.

Study casts new light on gang membership in the US

A recent study of U.S. teenagers found that while economically disadvantaged minority youth are more likely to join gangs than other demographic groups, gang members come from all backgrounds.

Study casts new light on gang membership in the US

A recent study of American teenagers found that while economically disadvantaged minority youth are more likely to join gangs than other demographic groups, gang members come from all backgrounds.

The study, Gang membership between ages 5 and 17 years in the United States, was published in the Journal of Adolescent Health and challenges many popular demographic stereotypes about gangs. 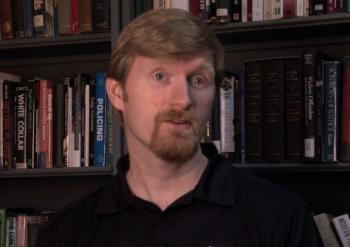 “Accepting the portrayal of gang membership we see in the media as correct will lead to ineffective strategies to prevent gang joining and the problems that follow,” said co-author Gary Sweeten, associate professor of Criminology and Criminal Justice at Arizona State University.

The study found that while minorities and those in poverty are more likely to join gangs, most gang members are non-Hispanic whites and not from impoverished homes. Twenty-nine percent are female.

Law enforcement severely undercounts juvenile gang members, with national estimates at 300,000 – less than one-third of what was found in the study.

“Law enforcement uses a top-down strategy, recording older and more criminally-involved youth as gang members, which ignores younger and more peripherally gang-involved youth; all of whom are captured in the bottom-up strategy we use in this study,” said lead author David Pyrooz, assistant professor of criminal justice at Sam Houston State University.

The estimate of 1 million juvenile gang members represents about 2 percent of the population from age five to 17 in the U.S. These gang members are highly concentrated in the early teen years. Pyrooz and Sweeten estimate that 5 percent of the nation’s 14-year-olds are gang members. Most youthful gang members quickly depart gangs, with about 400,000 joining gangs and another 400,000 leaving gangs every year.

“Being a gang member is not all that it is cracked up to be, which is something kids realize once they get involved and find out that the money, cars, girls and protection is more myth than reality,” said Pyrooz.

Because gang membership has so many negative health and life outcomes, even after someone leaves a gang, relying on law enforcement gang data alone would under-diagnose youth violence and limit ways to respond to it, the study found.

Gang youth represent an important group to be targeted for prevention and intervention programs. The findings from this study are important for youth, parents and health care professionals to better understand and respond to gangs in our schools, neighborhoods and care facilities, based on facts and not popular perceptions.