1,000-plus students to engage in developing solutions to major world problems

Watch the coverage unfold on Storify. 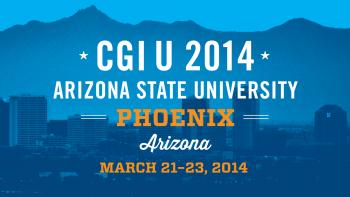 ASU student Kathleen Stefanik is no stranger to overcoming adversity.

Having grown up in extreme poverty, she became the first member of her family to earn a college degree. After making many personal sacrifices to secure the educational future of her three children and earning an associate's degree at Mesa Community College, Stefanik transferred into ASU’s College of Technology and Innovation and Barrett, the Honors College.

Now, she is working on her undergraduate degree in industrial and organizational psychology and holds a 4.19 GPA.

Stefanik exemplifies the 200 Sun Devils chosen to represent ASU at the Clinton Global Initiative University (CGI U), hosted on the Tempe campus this weekend. Her "commitment to action" – a signature part of CGI U – is to help struggling farmers in Peru increase crop production by using an ancient method of soil improvement called Terra Preta. This technique can enable them to become businessmen, in addition to feeding their families, thereby pulling their communities out of the cycle of poverty.

More than 1,000 students like Stefanik, committed to transformational change, will take part in the March 21-23 event. They will be inspired by President Bill Clinton, Former Secretary of State Hillary Rodham Clinton, Clinton Foundation Vice Chair Chelsea Clinton and other social change leaders who aim to educate and empower through panel discussions, networking events and a culminating Day of Action in central Phoenix.

These undergraduate and graduate students will engage in developing solutions to some of the most pressing concerns of the Millennial generation, including human rights, women’s social and economic empowerment and combating HIV/AIDS in the United States.

"By sharing their commitments to action – new, specific and measurable plans spanning areas such as education, environment and climate change, peace and human rights, poverty alleviation and public health – students will gain new perspectives about how to most effectively implement their ideas," said Jacqueline Smith, executive director of University Initiatives and adviser to the president for social embeddedness, who is leading the ASU effort.

“Each year, the commitments and partnerships that come out of CGI University prove that young people are not only up to the task of working toward a safer, more sustainable world, but that they are eager to get started now,” said Chelsea Clinton. “Whether interested in starting a social venture to fight HIV/AIDS, or increasing women’s interest in STEM in remote areas of the world, students come to CGI U to turn their ideas into action. We are thrilled to bring this meeting to ASU, which has the largest solar energy portfolio of any university in America and a strong commitment to positive social change and innovation.”

CGI U 2014 attendees will have access to more than $750,000 in seed funding to implement their commitments. The funding marks the largest sum in the meeting’s history, including $650,000 from the growing CGI University Network of more than 55 colleges and universities, and another $100,000 through the Resolution Project Social Venture Challenge, a competition between aspiring student entrepreneurs with sustainable enterprises.

On Sunday, students will gather in downtown Phoenix for the Clinton Foundation’s ninth Day of Action. The morning of community service will be in collaboration with PHX Renews, a partnership between the City of Phoenix and Keep Phoenix Beautiful, that aims to transform previously vacant lots in the city into vibrant and sustainable public spaces. To kick off the Day of Action, Chelsea Clinton and President Bill Clinton will be joined by Mayor of Phoenix Greg Stanton, Co-Founders of Americans for Responsible Solutions Former U.S. Representative Gabrielle Giffords and former astronaut Mark Kelly.

CGI U at ASU is a Zero Waste event, exemplifying ASU's deep commitment to sustainability.

Follow CGI U at ASU on Twitter at @CGIU and @ClintonGlobal or on Facebook at Facebook.com/CGIUniversity for meeting news and highlights. The official meeting hashtag is #CGIU. Plenary sessions will also be live streamed during the meeting at live.cgiu.org.

Two faculty members in ASU’s Ira A. Fulton Schools of Engineering have co-authored a book about the risky construction industry.

Two faculty members in Arizona State University’s Ira A. Fulton Schools of Engineering and a certified public accountant have co-authored a book about maneuvering through the complicated and risky construction industry.

“Managing the Profitable Construction Business: The Contractor’s Guide to Success and Survival Strategies,” recently published by John Wiley & Sons, shares “secrets” that allow contractors to take control of their contracting business and manage it through the natural highs and lows of the market.

The authors are Thomas C. Schleifer, assistant research professor in the Del E. Webb School of Construction, Kenneth T. Sullivan, an associate professor both in the School of Sustainable Engineering and the Built Environment, and John M. Murdough, principal of Pittman & Murdough, a CPA who specializes in construction business accounting.

Terry Lukow, former executive vice president of Construction for The Travelers Companies Inc., wrote a forward for the book.

“Construction professionals need this book,” Lukow wrote. “In good times, contractors do not have to be the best strategic managers, but this is a cyclical business, and in difficult times, they have to be strategic, decisive and unafraid to make tough decisions. Until this text, there has been limited published guidance available on effective strategies and processes on how to prosper in the highly risky construction business.”

The book addresses understanding the primary areas of construction business failure in the next decade, minimizing business risk with real-world examples and developing a positive and competent management attitude and strategy.

Schleifer, a sought-after private consultant, joined the construction industry at 16 and has worked as a foreman, field superintendent, project manager and vice president of a construction company he owned with his brother. He was also the founder and president of the largest international consulting firm serving the contract surety industry, and often is referred to as a construction business “turnaround” expert because of the number of companies he has rescued from financial distress.

In his current role as a research professor, he has been a driving force in developing research and models of the industry that are both revealing and realistic. He has a doctorate in construction management from Heriot-Watt University in Edinburgh, Scotland.

His research processes have generated more than $6 million in research funding and have been implemented in information technology, business services and construction projects valued at more than $3 billion. He has a master's in real estate and urban economics, and a doctorate in civil and environmental engineering, both from the University of Wisconsin, Madison.

John Murdough, CPA, MBA, is a nationally recognized instructor and workshop leader who combines in-depth construction industry experience with a gift for teaching. Murdough’s guest lectures on the business of construction at the Del E. Webb School of Construction and his many seminars are among the most powerful and popular classes available in the construction community.

Murdough received the American Subcontractor Association’s Construction Innovator of the Year award and the Plus One award from ASU, recognizing his innovative educational programs.

You can order "Managing the Profitable Construction Business" at www.wiley.com/WileyCDA/WileyTitle/productCd-1118836944.html.