An array of work from a prominent local artist collective will open the fall visual art season at ASU Gammage, in Tempe, Aug. 30.

Eye Lounge is an artist-run collective with a contemporary art space in downtown Phoenix, made up of about 25 visual artists committed to fostering emerging and established local talent. Their exhibit at Gammage runs through Oct. 7. 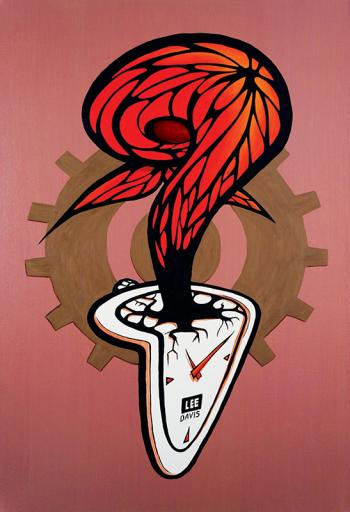 Founded in 1999, Eye Lounge has been listed as part of the “Best Underground Art Scene” by The Arizona Republic and has been featured in local and national press, including Sunset Magazine, Art In America, ArtNews, Phoenix New Times, Shade Magazine, Java and others.

The collective is one of the founding members of Roosevelt Row and a participant in both ArtDetour and First Fridays. New exhibits by leading Arizona artists open every month at its art space in Phoenix.

Last year Eye Lounge participated in an exchange of exhibitions with an artist collective in Jerusalem, Agripas 12.

Exhibit hours at ASU Gammage are 1 to 4 p.m., Mondays, or by appointment. Due to rehearsals, event set-up, performances, special events and holidays, it is advisable to call (480) 965-6912 or (480) 965-0458 to ensure viewing hours, since they are subject to cancellation without notice.

The street address is 1200 S. Forest Ave., Tempe. Parking is available at meters around the perimeter of ASU Gammage. Entrance is through the east lobby doors at the box office.

Beginning Aug. 21, the Tempe location will unveil the 86,000 additional square feet that have been built to accommodate more strength and cardio equipment, multipurpose rooms and activity courts. 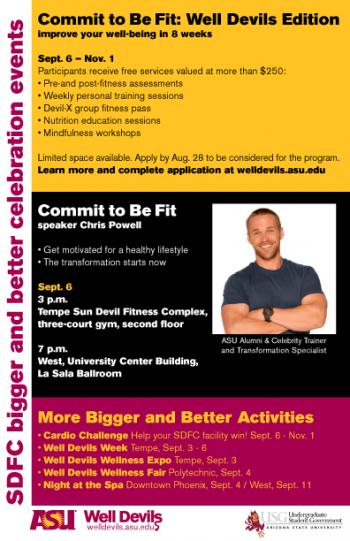 “The additions we’ve made are student-driven. The spaces are all transparent so you can view the activities taking place. We also have new programs for students to learn about a healthy lifestyle and incorporating these practices into their lives,” said Tamra Garstka, director the Tempe Sun Devil Fitness Complex.

Nutrition and wellness coaching will be available on site. Students may enjoy a game of basketball, dodgeball, soccer or floor hockey on one of the six new indoor courts. Those looking for a cardio fix can use the indoor track or brand-new elliptical and treadmill machines. The complex now has more than 130 cardio machines for students, faculty and staff to use.

Additional features include a meditation room, conference rooms, an organic juice bar and social spaces for students to congregate and work.

The Sun Devil Fitness Complex also is launching two new initiatives to get the ASU community engaged in healthy living. The first is a partnership with Precor that will allow for fitness complex participants to use the Preva app on the actual Precor cardio equipment to track their progress. They can use the app at any location with Precor equipment. During an eight-week period, the community is invited to log their minutes for the chance to win an iPod.

The second program will bring alumnus Chris Powell to campus on Sept. 6 to kick off the "Commit to be Fit" challenge. Students and staff interested in upping their fitness game may apply to join the eight-week program. Selected participants will receive personal training, nutrition counseling, group fitness pass, mindfulness classes and cooking classes.

“'Commit to be Fit' is more than just a fitness program. We are partnering with The School of Health Solutions to incorporate an academic component that will provide students with real-life, practical experiences and teach participants about the importance of exercise and wellness,” said Garstka.