The American Council on Education (ACE) has named Arizona State University the first recipient of an award created to recognize a college or university which, during a period of great change in higher education, has responded to challenges in innovative ways that allow the institution to thrive. ASU President Michael M. Crow accepted the inaugural award March 9 during ACE's 96th Annual Meeting in San Diego, Calif.

The ACE/Fidelity Investments Award for Institutional Transformation also includes a $20,000 cash prize that may be used at the discretion of the president. According to ACE, the nation’s largest higher education organization, the new award recognizes a college or university that raised, rallied or repurposed its resources to achieve dramatic and successful changes that allowed it to more fully fulfill its mission over a relatively brief period of time. 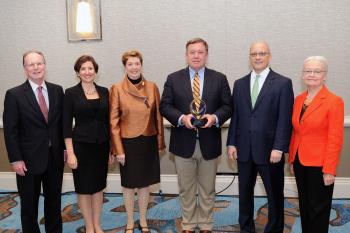 “For the last 12 years, we have been intent on establishing a ‘New American University’ model at Arizona State University, measured not by who we exclude, but rather by who we include and how they succeed,” Crow said. “So it is gratifying to have our efforts honored by a higher education organization as prestigious as the American Council on Education.

“At ASU, we are focused on a complete reconceptualization of what the design of a public university needs to be because the historic designs are inadequate to the task. They are unable to find ways to match accessibility and excellence in the same institution. Access without quality is insufficient, and quality without access doesn’t provide enough of a societal return.”

“Arizona State University is a prime example of the work our institutions are doing to expand access to higher education and meet the needs of an ever-more diverse student body,” said ACE President Molly Corbett Broad. “We appreciate the generous support of Fidelity Investments for this award, which will allow us annually to recognize an institution where this type of dramatic transformation has occurred.”

“After careful review by a veteran panel of esteemed higher education leaders, Arizona State University was selected from a large and strong pool of applicants to win this inaugural award recognizing institutional transformation,” said Joan Wodiska, ACE vice president and chief leadership officer. “This award shines a bright light on the successes in America’s higher education system, the need for ongoing dynamic changes on college campuses and the next generation of great ideas for our nation and students. The students, faculty and leaders at Arizona State University can be proud of their great accomplishments.”

"Fidelity Investments is honored to partner with the American Council on Education to make this transformation award possible, and we congratulate Arizona State University for being the inaugural winner," said Rick Mitchell, executive vice president, Tax-Exempt Retirement Services, Fidelity Investments. "Arizona State has shown exceptional leadership and achievement within the higher education community, and deserves the recognition for the work it has done to diversify enrollment and make higher education more accessible to future generations."

Last year, ACE named Crow to its Presidential Innovation Lab, comprised of more than a dozen college and university leaders examining the disruptive potential of new educational technologies to boost the number of Americans earning a college degree. Crow was also honored by Carnegie Corporation of New York as one of four recipients of its 2013 Academic Leadership Award. He was awarded a $500,000 grant to support his academic initiatives.

Crow has served as the president of ASU since 2002. He has become nationally known for his commitment to innovation and for reinventing the research university model to emphasize access and excellence. This “New American University” has been the guiding principle of Crow’s administration. Under Crow, ASU has improved access year after year, as measured through new student enrollment. Thirty-nine percent of the fall 2013 freshman class were students of color, representing a 165 percent increase in minority representation in the entering freshman class since 2002. At the same time, ASU has increased its measures of academic excellence – it has been ranked one of the top 100 world universities by the Academic Ranking of World Universities. ASU is also tied at fifth place in the nation among research institutions, including Yale University and University of California at Berkeley, for its number of Fulbright student scholar award winners.

ASU has assumed major responsibility for the economic and cultural well-being of the community. Faculty are encouraged to pursue use-inspired research, and the university, among other areas, has worked to improve the environment through its creation of the Global Institute of Sustainability and School of Sustainability; health care through its creation of the College of Health Solutions and its partnership with Mayo Clinic; and P-12 education with the restructuring of the Mary Lou Fulton Teachers College to refocus efforts on excellent teacher preparation.

Students and researchers from ASU, NAU and the UA are collaborating to grow algae using wastewater. The algae can then be harvested to create fuel, feed and food products.

Arizona universities are working together to turn the state’s waste to gold – or at least renewable fuel. As part of an Arizona Board of Regents-funded project, students and researchers from Arizona State University, Northern Arizona University and the University of Arizona are collaborating to grow algae using wastewater. The algae can then be harvested to create fuel, feed and food products.

The collaboration is designed to advance the application of algae in Arizona as an industry to produce valuable products and remediate wastewater, and to educate and develop a workforce to support the industry. The goal is to maximize Arizona’s resources. 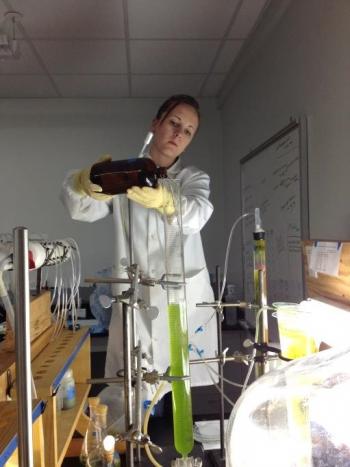 On March 7, the public was invited to learn about the ongoing projects at each university. The University of Arizona will host a public forum to present student work and projects, which range from aquaculture to the study of algal DNA and the use of saline waters to grow algae. Contact jsmith@ag.arizona.edu for more information.

This event follows the initial public presentation held at NAU on November 2, 2013, which introduced the variety of projects that Arizona university students are focusing on to advance Arizona’s algaculture.

“It was a great first meeting,” says Terry Baxter, associate professor of civil and environmental engineering at NAU. “The students not only gave wonderful presentations about their work in a public setting, but they have become much more aware of how important it is to work together across the three institutions.” In addition to informing the public, these meetings also allow researchers from each of the public institutions to share information, generate and discuss new ideas, and develop new approaches that can ultimately advance the work that is being done in Arizona.

Arizona serves as an ideal location for algae research, with expansive non-arable land suitable for algae farms and more than 330 sunny days per year to encourage algae growth through photosynthesis. More than 40 algae-related enterprises are located throughout the state, including industries stemming from university research.

The project is funded by the Arizona Board of Regents Technology and Research Initiative Fund.

To learn more about the ASU Arizona Center for Algae Technology and Innovation, visit azcati.com.

For more information about the NAU algae program, contact Terry Baxter, at terry.baxter@nau.edu.

To learn more about the UA algae research, contact Kim Ogden, at ogden@email.arizona.edu or Randy Ryan, at rryan@ag.arizona.edu.