The Campus festival celebrates the top student films from across the globe and has ASU film students within reach of attaining their 15 into 50 goal to place at least 15 ASU School of Theatre and Film student films in 50 national-level competitions this year.

The films to be screened at the Campus MovieFest are:

Nine other films written, directed, produced, crewed and in some cases acted by School of Theatre and Film students have also been screened in student film festivals for the 2011-2012 academic year with some earning top awards.
Those include:

"Once again, we see the extraordinary work our students are capable of here at ASU,” says F. Miguel Valenti, Lincoln Professor of Ethics and the Arts and founder of the film and media production programs. “The growing number of national awards is testimony to their talent, our faculty and our program. We are very proud."

The Arizona State Sun Devils are this month's featured team on the Green Sports Alliance website, where sports and environmental sustainability intersect.

It's not often that you hear about the U.S. Environmental Protection Agency teaming up with the Boston Red Sox, but that is the goal of the Green Sports Alliance – a nonprofit with a "mission to help sports teams, venues and leagues enhance their environmental performance." The alliance's mission is stated on their website, where the Arizona State Sun Devils are the featured team this month.

The Sun Devils were selected as the featured team for their commitment to offer "a better way to play," evident in their expansive solar installments and their public transportation partnerships. 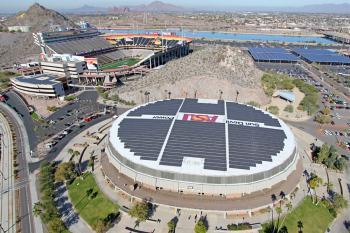 The Green Sports Alliance works with sports teams and environmental experts to improve the fan experience and the way in which sports facilities operate in the United States. They write: "Professional sports has been supporting socially responsible causes for decades. Now our environment will benefit from that good work."

To see ASU featured on the website, and learn more about how the alliance is working to sustain our planet – and Fenway Park – visit greensportsalliance.org.