Imagine a paper-thin computer display you could roll up and carry around easily. The Flexible Electronics and Display Center at Arizona State University is advancing technologies to make that possibility a reality. 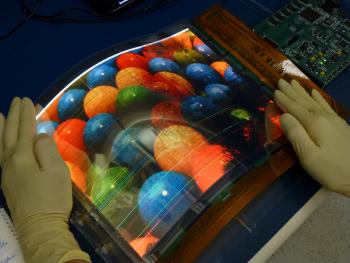 This month, the center announced that it has successfully manufactured the world’s largest flexible color organic light emitting display (OLED) prototype using advanced mixed oxide thin film transistors (TFTs). Measuring 14.7 diagonal inches, the device was developed at the center in conjunction with Army Research Labs scientists. This new display is nearly twice as long as one the center developed last year, which was the largest such display at the time.

"Mixed oxide TFTs offer a highly cost-effective approach for manufacturing displays that deliver high performance, including vibrant colors, high switching speeds for video and reduced power consumption – all features that will be required for the next generation of consumer electronics," says Nick Colaneri, director of the Flexible Electronics and Display Center. "Furthermore, mixed oxide TFTs can be manufactured on existing amorphous silicon production lines, eliminating the need for specialized equipment and processing, thereby reducing costs compared to competitive approaches."

The new device also meets a critical target set by the U.S. Department of Defense to advance the development of full-color, full-motion video flexible OLED displays for use in thin, lightweight, bendable and highly rugged devices. This latest version includes advancements in both the OLED materials to enhance performance, as well as the encapsulation processes used to protect the display. Compared to previous devices, the new display is thinner and ultra lightweight.

“It’s as thin as a sheet of paper. Think of a display that you could roll up and tuck away somewhere or put in places you can’t normally find displays because they’re big, and heavy and bulky,” says Colaneri. The device is also durable, but flexible enough to conform to a curved surface.

One potential application is to integrate displays into soldiers’ clothing, where they can provide real-time information and enhanced safety. This was one of many design features the Army identified for researchers at the center to consider as they built the displays.

“As long as displays are big, heavy, bulky and made out of glass that can break, it’s obviously not ideal for a soldier that already has 100 pounds of stuff that he or she has to carry around,” says Colaneri. “The army funded this project because they had an interest in pushing for displays that are thin, lightweight and don’t break. They imagine more and more electronic devices that are going to allow soldiers to do their jobs or keep them safe on the battlefield.”

The groundbreaking Presidential Innovation Lab was launched recently by the American Council on Education to study the efficacy of new academic and financial models in closing college attainment gaps.

Arizona State University President Michael M. Crow is among more than a dozen leaders from a diverse group of colleges and universities examining the disruptive potential of new educational technologies, such as massive open online courses (MOOCs), to boost the number of Americans earning a college degree. The launch of the Presidential Innovation Lab was announced this week by the American Council on Education, the nation’s largest higher education organization.

“I look forward to helping lead a national dialogue about how newer educational innovations could be used by particularly older, post-traditional students, low-income young adults and other underserved students toward degree completion,” Crow said. “This opportunity aligns directly with our ASU vision as the model for a New American University – measured not by who we exclude, but rather by who we include and how they succeed.” 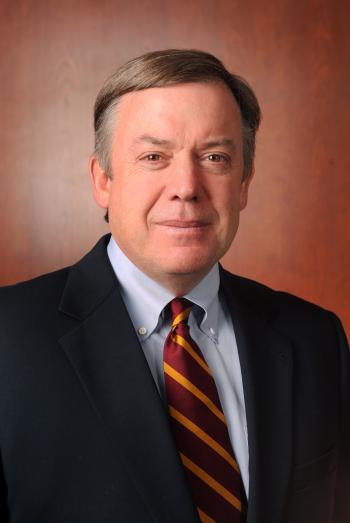 According to ACE, the Presidential Innovation Lab will bring together higher education leaders to engage in proactive thinking about this new learning space. The lab is part of a wide-ranging research and evaluation effort examining the academic potential of MOOCs announced by ACE in November 2012.

Initially, the lab will meet July 21-23 at the Institute for the Future in Palo Alto, Calif., an independent, nonprofit research organization that will help guide the work of the university leaders. A second two-day meeting is scheduled for October 2013 in Washington, D.C.

The new think tank of higher education CEOs will consider questions such as how newer educational innovations could be used by students toward degree completion, and the potential impact of such innovations on the fundamental design and delivery of instruction. The lab participants also will examine how institutions recognize learning and which financing models underpin all of higher education.

Findings from the lab will be shared with ACE membership, policymakers and the media. Its work is being supported by the Bill & Melinda Gates Foundation.

In addition to Crow, other higher education leaders taking part in the lab include the following: