The partnership between ASU and Phoenix-based Banner Health, one of the nation’s largest nonprofit health systems, includes the launch of a new Arizona State University-Banner Neurodegenerative Disease Research Center on ASU’s Tempe campus. 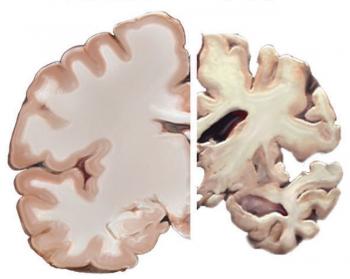 “We are grateful for the opportunity to work together to build one of the world’s largest basic science centers for the study of Alzheimer’s and other neurodegenerative diseases at ASU and to further develop our clinical and research programs at Banner,” said Eric Reiman.

The effort capitalizes on Banner’s internationally recognized programs in Alzheimer’s research and patient care and  on ASU’s rapid ascension as a world-class research university. It also leverages Banner’s close working relationships with other research organizations in Arizona.

“This extraordinary research alliance will help galvanize the search for answers to degenerative brain diseases,” said ASU President Michael Crow. “This is yet another example of how institutions in Arizona are leading the way for groundbreaking research in age-related diseases. This new effort will be a magnet to attract more researchers, more businesses and more resources to this urgent fight.”

More than 5 million Americans suffer from Alzheimer’s. This has profound implications for Arizona, with a population of more than 1 million people older than 65, a number that is expected to grow to 2.4 million by 2050.

As part of this partnership, ASU will invite six scientists from the Banner Sun Health Research Institute in Sun City to relocate to the Tempe campus, where they will have access to other scientists, state-of-the-art laboratory space and support to advance their research. The center is expected to rapidly grow in both size and impact through aggressive recruitment of innovative research teams pursuing causes and treatments for neurodegenerative diseases.

Banner will continue to grow its clinical and research programs at Banner Alzheimer’s Institute and Banner Sun Health Research Institute. Together, Banner and ASU receive nearly $65 million in current research funding in the neurosciences. That number is expected to rise significantly with the recruitment of new researchers and funding.

“Leaders from Banner Health and ASU have worked hard to make this partnership a reality – a partnership that will enhance the scientific strengths of our two organizations, provide major growth opportunities for research in the Sun City area, and strengthen Arizona’s position as a major research center.”

Barring any significant treatment breakthroughs, the number of people affected by Alzheimer’s disease could more than triple to 16 million in the U.S. by 2050, at a health-care cost of more than $1.2 trillion annually.

Parkinson’s afflicts up to 10 million people worldwide. An estimated 60,000 Americans are diagnosed with Parkinson's each year, while thousands of cases go undetected. Other neurodegenerative diseases continue to take a devastating toll on patients and family caregivers.

“Bringing the two groups together will accelerate the bench-to-bedside development of new diagnostic, drug and other treatment options for patients and family caregivers,” said DuBois. “Time and time again, the scientific community has shown how multidisciplinary teams can come together as incubators for innovation and discovery.”

In addition to his other positions, Reiman is the CEO of Banner Research. He is internationally recognized for his contributions to brain imaging, the early detection and tracking of Alzheimer’s disease, and the accelerated evaluation of Alzheimer’s prevention therapies. The Neurodegenerative Disease Research Center will be closely affiliated with faculty from ASU’s College of Liberal Arts and Sciences and Biodesign Institute, a translational science institute with some 500 faculty, staff and students, representing expertise in the biosciences, engineering and advanced computing.

The agreement between Banner and ASU is an extension of their work with the Arizona Alzheimer’s Consortium, a leading model of statewide collaboration in biomedical research, and it is intended to help make Arizona a destination for the best and brightest minds in this field. Under the agreement, the center’s scientists will hold joint faculty appointments at both ASU and Banner Research.

Arizona State University's "Sparky" license plate has become a must-have item for an increasing number of Sun Devils on the go, with the program's total plate count breaking the 17,000 mark for the first time ever.

Arizona State University’s “Sparky” license plate has become a must-have item for an increasing number of Sun Devils on the go, with the program’s total plate count breaking the 17,000 mark for the first time.

According to information from the Arizona Motor Vehicle Division, there were 17,073 Sparky license plates on the road as of May 30. 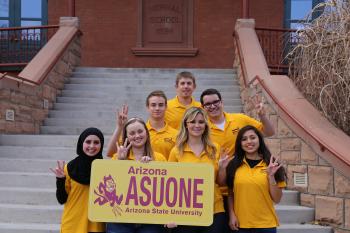 The license plate program provides funding for the Medallion Scholars, a scholarship administered by the ASU Alumni Association. The Medallion Scholarship gives financial support to ASU students who are Arizona residents, as well as opportunities to foster their personal development and leadership skills through various activities. For every Sparky license plate purchased, $17 of the $25 fee goes directly to the scholarship fund. More than 100 ASU students currently are part of the Medallion program.

Plate sales have seen solid growth since the plate received a design makeover in 2010. The current license plate features a bold look with Sparky the Sun Devil on an all-gold background. It can be customized with as many as six characters on the plate.

“We’re pleased that our graduates and our fans appreciate ASU’s contributions to the community and want to share their Sun Devil pride wherever they drive,” she said. “We encourage all friends of the university to purchase a license plate and support this wonderful scholarship program that benefits ASU students who graduated from Arizona high schools.”