The ASU Art Museum is presenting two concurrent solo exhibitions of work by artist Pablo Helguera, both of which will open March 21. “Pablo Helguera: Librería Donceles” and “Pablo Helguera: Chrestomathy,” curated by Julio César Morales, will be the first presentation outside of the East Coast of this new work by Helguera, a world-renowned visual and performance artist whose work weaves together personal and historical narratives in the context of socially engaged art and language.

“Pablo Helguera: Librería Donceles” is an itinerant, functional Spanish-language bookstore of 12,000 used books on every subject – including literature, poetry, art, history, biology, medicine, anthropology and politics, as well as children’s books. To create the installation, Helguera assembled donations of books from individuals and groups in Mexico City and elsewhere, offering prints of his previous artworks in exchange for boxes of books. “Librería Donceles” will be on view through June 28 in downtown Phoenix at Combine Studios Gallery, home of the ASU Art Museum International Artist Residency Program. 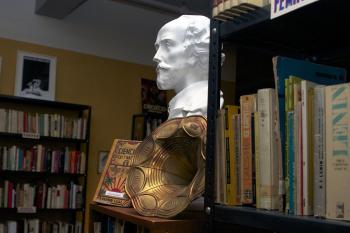 The project’s title is inspired by the old bookstores that line Donceles Street in Mexico City’s historic center, says Morales, and it will foster the open-ended and unhurried environment that draws people to used-book stores, where customers enter without a particular title in mind, and instead roam the shelves with the hope of spontaneously discovering a book that beckons them.

“The first iteration of ‘Librería Donceles’ was in September 2013 at Kent Fine Art in New York, when it became the only Spanish-language used-book store in the city – the same will be true in Phoenix,” says Morales. “By rendering visibility to the Spanish language in Phoenix, the installation recreates the unique, intellectually and culturally rich environment of a secondhand bookstore and questions how Spanish is integrated into the broader cultural life of Arizona.

“Pablo Helguera is a leader, if not a pioneer, in the social practice genre,” Morales explains. “’Librería Donceles’ is a tipping point within his practice that places socially-engaged art to the test in Arizona’s current social climate by offering the only Spanish language book store in Phoenix as a functional art project.”

“Although this project was originally slated for our new Brickyard location, Helguera visited in early February to look at the space before installation,” explains Gordon Knox, ASU Art Museum director. “After those conversations, we decided at the artist’s request to move the 'Libreria Donceles' exhibition to the gallery in downtown Phoenix. Our space in Phoenix is better suited for the store-front nature of his installation, and affords several new opportunities for community interaction that could be lost if the project were presented in a more traditional museum setting.”

Visitors to “Librería Donceles” – Spanish-speakers and non-Spanish-speakers alike – will be welcomed in this spirit of community interaction, and invited to a brief consultation with the artist or an associate. Once their interests and “bibliological profile” (as Helguera has described it) have been assessed, visitors will be given suggestions on where to look to choose their book. Only one book per customer will be allowed, in exchange for a pay-what-you-wish donation. All proceeds from these transactions will be donated in turn to the Phoenix Public Library Foundation in support of early literacy programs.

“’Chrestomathy’ is a bridge across Helguera’s many fine art projects that explores issues of translation, cultural memory and the origins of recorded music as a form of cultural dialogue,” says Morales.

One landmark work that will be included in “Chrestomathy” is Helguera’s 2012 “Rogaland,” a project “made through a process of mistranslation.” The project is based upon the 1936 book “Gamle gardsanlegg i Rogaland,” by Norwegian archaeologist Jan Petersen, which is an account of the excavations of several medieval farms in the Rogaland region of Norway. Helguera, who neither speaks nor reads Norwegian, mistranslated the explanatory captions for the book’s 63 plates into English by conjuring phrases and statements suggested by the images and the imagined sound of the printed words.

“Having Helguera’s work presented in our two locations outside of the main museum highlights the museum’s geographical spread, its community embeddedness and the diverse range of facilities we operate,” says Knox. “This diversity of venue and these very different shows also display the extraordinary breadth of Helguera’s artistic practice.”

Pablo Helguera is a visual and performance artist, whose projects have included a school that traveled from Anchorage to Tierra del Fuego, complete with a portable schoolhouse; the recording of dying languages on wax cylinders; a memory theater; and the founding of the Instituto de la Telenovela. His work has been seen most recently at CIFO in Miami, the 2012 Havana Biennial and the Centro de Arte Reina Sofía in Madrid.

An opening reception for “Pablo Helguera: Librería Donceles” will be held on March 21, with a members, alumni and press preview from 5:30-6:30 p.m., and a public reception from 6:30-8:30 p.m. The artist and the curator will be present.

An opening reception for “Pablo Helguera: Chrestomathy” will be held in conjunction with the Grand Opening for the new ASU Art Museum Brickyard on April 11, with a members, alumni and press preview from 5:30-6:30 p.m., and a public reception from 6:30-8:30 p.m.

Additional programming in conjunction with the exhibitions is being developed in partnership with Performance in the Borderlands, the Puente Movement, Radio Campesina Network, Roosevelt Row, Teach for America and Culture is Life: Women of Color Media Arts and Collective.

“Pablo Helguera: Librería Donceles” and “Pablo Helguera: Chrestomathy” are supported by the Diane and Bruce Halle Foundation, Kent Fine Arts, the Helme Prinzen Endowment and an ASU Diversity Grant, and are organized by the ASU Art Museum, part of the Herberger Institute for Design and the Arts at Arizona State University. To learn more about the museum, call 480.965.2787 or visit asuartmuseum.asu.edu.

Admission: Free at all three locations.

Hours: The ASU Art Museum and ASU Art Museum Brickyard are open 11 a.m.-8 p.m. on Tuesdays (during the academic year), 11 a.m.-5 p.m., Wednesday through Saturday. The museum is closed on Sundays and Mondays.

The ASU Art Museum International Artist Residency Program in downtown Phoenix at Combine Studios is open from 2-7 p.m., Wednesday through Saturday and by appointment for the duration of Helguera’s installation.

ASU Prep high school students will portray undocumented students in their first drama/musical production on March 7-9 at the ASU Preparatory Academy in Phoenix.

No. 12 Baylor Knocks off Men's Tennis

“In and Out of Shadows,” written by Soto, is a heartfelt, funny, honest and touching musical, which chronicles the lives of undocumented high school students growing up in California. The play provides insight into the lives of those who live in and out of the “shadows” to purposely keep a low profile. 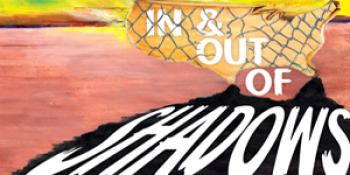 “These actors have really embraced direction and script analysis in a way that enables them to tell a story on stage,” said high school drama teacher Andrea Enger. “I am very proud of each student actor, and I can’t wait to see them perform such an important play.”

James Blasingame, an ASU English education professor, made it possible for ASU Prep’s students to option the rights to perform the play.