Boasting two interstate freeways and one of Arizona's largest shopping malls, the City of Tempe has been selected to represent the evolution of world civilization over the next thousand years.

On March 6, the ASU Art Museum will install a camera designed by experimental philosopher Jonathon Keats to take a millennium-long photograph of the evolving Tempe skyline. The museum will unveil the photograph in a month-long exhibition scheduled for spring 3015. 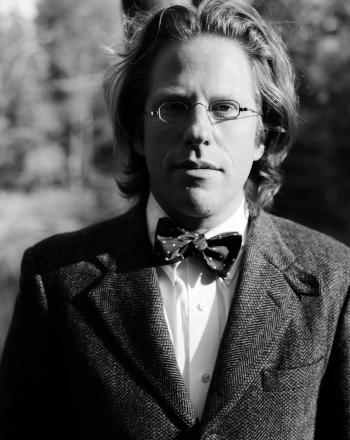 “The first people to see this picture will be children who haven't yet been conceived,” said Keats. “They're impacted by every choice we make, but they're powerless. If they can't influence our decisions, at least they can bear witness.”

To document the next thousand years of Tempe civilization, Keats has conceived a new approach to photography based on the traditional pinhole camera.

“My photographic time capsule is extremely simple, since anything complicated is liable to break,” said Keats.

The solid metal camera uses oil paint in place of ordinary film. Pierced through a plate of 24-karat gold, a minuscule pinhole focuses light on the colored pigment, such that the color fades most where the light is brightest, very slowly creating a unique positive image of the scene in front of the camera.

“The photograph not only shows the skyline, but also records how it develops over time,” Keats explained. “For instance, old houses torn down after a couple centuries will show up only faintly, as if they were ghosts haunting the skyscrapers that replace them.”

According to ASU Art Museum curator Garth Johnson, the millennium camera will be installed on the museum's third-level terrace, where museum visitors will be able to see both the city view and the photographic apparatus.

“The ASU Art Museum is well-positioned to bear witness to the Tempe skyline as it evolves and changes,” said Johnson. “The span involved in Keats’ vision is at once humbling and empowering for a forward-thinking institution like ours.”

At noon on March 6, Johnson will discuss these themes in conversation with Keats at a public lecture to be held on the museum’s third-floor terrace. The camera unveiling is presented in conjunction with ASU’s Center for Science and the Imagination and is free and open to the public.

Immediately following the museum event, Keats will lead a hands-on workshop on building deep time cameras as part of ASU's annual Emerge festival, set to take place from 3 p.m. to midnight, March 6, at the university's SkySong Innovation Center in Scottsdale. The event is free and open to the public, with registration requested through asuemerge2015.eventbrite.com.

As part of Keats’ workshop at Emerge, the public is invited to build a pinhole camera with a 100-year exposure time to hide somewhere in the Phoenix area, invisibly monitoring changes in the urban landscape between now and 2115.

“I don't want to be the only deep time photographer on the planet,” said Keats. “Millennial photography needs to be ubiquitous if it's to have an all-encompassing impact on us,” he said, hinting that Tempe is just the first of many cities soon to have millennium cameras.

For more information on the ASU Art Musuem and to read Keats' bio, visit: asuartmuseum.asu.edu/news/press_release.php?id=1096.

A team of seven applied biological sciences majors at Arizona State University excelled in multiple events at the 2015 student competitions held as part of the Society for Range Management annual meeting in Sacramento, California.

“Who knows what a pineapple plant and a saguaro cactus have in common?”

That was the intriguing opening to a well-received extemporaneous speech that Arizona State University senior Kelsie Buxbaum delivered on the topic of CAM (crassulacean acid metabolism) photosynthesis as part of ASU’s participation in the student competition at the annual meeting of the Society for Range Management in Sacramento, California, in early February. 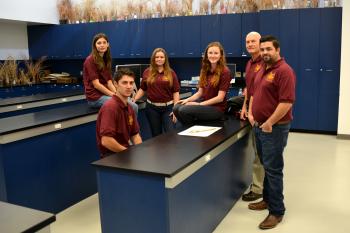 In addition to extemporaneous speaking, a skill that many rangeland and wildlife managers will use in their careers, the team of seven applied biological sciences majors from the College of Letters and Sciences at ASU’s Polytechnic campus also competed in the Rangeland Plant Identification Exam and the Undergraduate Range Management Exam.

Together they achieved ASU’s best overall performance to date in the annual event.

“In a decade of sending student teams, this is the first time we’ve had five students score above 600 on the 1,000-point Plant ID contest, and junior Julia Steier scored a 790, the highest ever for an ASU competitor,” says ASU faculty coach Eddie Alford, lecturer in the faculty of Science and Mathematics.

Scores of 600 and above put students in the running for award consideration.

“Overall, our Plant ID team placed 10th among 26 university teams in a contest where not many points separate the top 10 finishers,” he explains.

Alford says the grueling Plant ID event has been the heart of the competition for more than four decades. To prepare, competitors spend countless hours studying dried mounts of the seeds, spikelets, leaves and flowers of 200 wildland plants, in order to successfully identify the 100 pieces of plant material selected for the contest.

Senior Sarah Davis, who hopes to work in wildlife and habitat management with the Arizona Game and Fish Department or the U.S. Forest Service, says that her preparation for the Plant ID contest began in her ASU courses in plant taxonomy and restoration and wildlife plants.

“We all came to the lab often during free time to study,” Davis says. “I also had a chance to study the live plants in their habitat last summer, working as a biological field technician at the Agua Fria National Monument as part of a study of antelope habitat.”

The collaborative spirit that the team developed in the months leading up to the competition contributed to their impressive results in extemporaneous speech, where Chris Higginbothom placed seventh and Kelsie Buxbaum 16th among 45 competitors.

“Even these individual speeches reflected great teamwork, as the others pitched in to help Chris and Kelsie research, craft and polish their five- to seven-minute speeches,” Alford says. “Speakers had two-and-a-half hours to prepare on one of three topics drawn and could tap into any knowledge sources at their disposal, human or otherwise.

“Overall, this was just an outstanding effort by all of our students, one that the Sun Devil community can be very proud of,” he observes.

In addition to having the chance to bond as a team and experience a sense of camaraderie and connection with students from other universities, the ASU students attended conference workshops and a career fair – building contacts within a fairly tightknit professional community.

The annual range management meeting draws about 1,500 professionals and students from Canada, Mexico and the United States – including scientists, land managers, ranchers and specialists working for government agencies. All have an interest in the management of rangelands – uncultivated lands that are grazed by livestock and wildlife and managed to preserve or restore an ecological balance between soil, water, plants and animals.

“Networking is vital for potential federal employment and early professional development,” notes senior Matthew Kilford, whose internship with the U.S. Forest Service has led to a career position in the Tonto National Forest. “In an industry where everyone has the same passion as you, networking and agency involvement could put you at the top.”

Natural resource management is a big field, explains professor Alford, and rangeland management especially, with 50 percent of lands in North America and 70 percent of the world’s lands eligible for grazing or actively grazed by livestock or wildlife.

Starting salaries for new college graduates in the agriculture and natural resources sector are expected to be among the top five in 2015, according to a recent analysis that coupled U.S. Census data and employer survey analysis of the National Association of Colleges and Employers (NACE).

“There are quite a few jobs right now, and a high percentage of our students have been successful in getting jobs,” explains Alford, who brings to his teaching and mentoring a 30-year career with the U.S. Forest Service.

“Working with wildlife is always attractive to students, but as far as rangeland management goes, many students don’t know about it as a career option unless they grew up in a rural community,” he notes. “The conference really tries to get new generations interested in becoming involved in and excited about the field.”

The 2015 ASU range management team members and their events were: