Arizona State University has signed an agreement with the Department of Energy’s Argonne National Laboratory that will facilitate a broad portfolio of research shared between the two institutions. 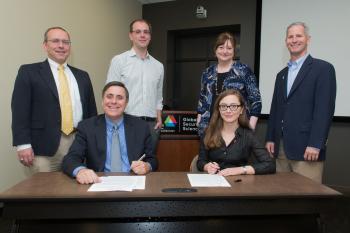 The five-year memorandum of understanding will establish a structure for ASU and Argonne to pursue novel research in areas including decision-making based on climate variability and uncertainty; the impacts of global population dynamics and urbanization; the challenges of renewable energy practices; and creating innovative solutions to problems in energy, education and sustainability.

ASU and Argonne have collaborated on scientific efforts ranging from investigating the structure of spider silk to developing an artificial leaf that uses solar energy to convert water into hydrogen. ASU currently leads a $20 million, five-year project known as the Foresight Initiative in collaboration with Argonne’s Global Security Sciences Division and other partners. The project brings together knowledge and capabilities from a variety of organizations to develop an integrated computational platform that will enable decision makers to explore how climate change and future resource contention could contribute to political unrest and instability, as well as gain insights into sustainability and resilience strategies for mitigating the effects.

During the ongoing work, it became apparent that the two institutions shared a common belief in the power of interdisciplinary, cooperative research to tackle the really large problems facing the country.

“ASU is a world-class research institution and their approach to addressing scientific challenges aligns closely with ours, so this agreement makes perfect sense,” said associate laboratory director for Energy and Global Security Mark Peters. “This idea of putting together cross-cutting teams to collaborate on challenging research really resonates at both ASU and Argonne.”

Nadya Bliss, director of the Global Security Initiative, which manages the Foresight Initiative, agreed with that assessment. She said not only will the agreement foster innovative research between Argonne and ASU, but it will also open a pipeline for talent to flow between the two institutions.

“Argonne and ASU share common goals for advancing research in key areas that will have an impact on our local and global communities,” added Sethuraman “Panch” Panchanathan, senior vice president of ASU's Office of Knowledge Enterprise Development. “We are delighted to continue the strong collaboration between our organizations with this new relationship, which will further our efforts to create sustainable solutions to challenges in the areas of climate adaptation, population growth and energy security.”

The Medallion Scholarship program incorporates components of leadership, scholarship and service. The scholars were introduced with a dinner at Old Main on the Tempe campus. 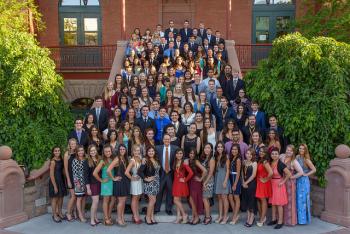 Medallion Scholars receive four-year, renewable scholarships of $3,000 annually, provided they actively participate in a mentorship program, contribute volunteer hours to the Alumni Association and other service organizations, maintain a satisfactory grade-point average and remain in good standing as an ASU undergraduate.

This year’s class of Medallion Scholars, who are projected to graduate in 2019, is:

More than 100 students currently receive the scholarship. During the most recent academic year, Medallion scholars received $300,000 in financial support.

Arizona vehicle owners with a “Sparky” license plate – ASU’s official collegiate license plate issued by the state Motor Vehicle Division – pay $25 annually for their plates, $17 of which supports the Medallion Scholars. Sparky license-plate sales began in 1989, and now there are more than 16,000 Sparky plates on vehicles throughout the state.

Reconstituted in 2006, the Medallion Scholarship Program was born out of the Alumni Association’s previous Medallion of Merit Scholarship. The original scholarship program traced its beginnings to the 1960s and provided merit-based financial assistance to thousands of students from across the state.

For more information on the Medallion Scholarship Program, visit alumni.asu.edu/services/student-scholarships/medallion-scholarship. To learn more about the “Sparky” plate program or to purchase a plate, visit sparkyplates.com.