Preudhomme will also serve as a special counsel to the university. 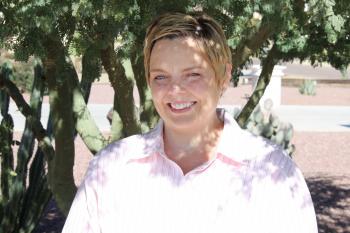 She will oversee and provide leadership in ASU’s activities related to Title IX, the federal regulations governing issues of sex and gender discrimination on college campuses, including allegations of sexual assault.

Preudhomme brings to the new position a record as a veteran litigator and as a lawyer for both the state of Arizona and the federal government. She currently serves as an associate general counsel for ASU, handling both employment and student-related matters.

In her new role, she will oversee investigations of sexual harassment and sexual misconduct cases, as well as training and education of campus personnel on the rights, responsibilities and resources for preventing gender-based discrimination. Preudhomme will also be responsible for supervising the collection and analysis of data and recommending policy changes.

“There is no mission more important in higher education than protecting members of our university community,” Preudhomme said. “Through this new role and a variety of steps that already have taken place, ASU aims to ensure an environment where students, faculty and staff alike can go about their studies or work without fear of sexual violence.”

As a deputy county attorney for Maricopa County, she provided training to prevent discrimination and sexual harassment, and she specialized in employment law, including discrimination issues, as a lawyer for the state of Arizona and Defense Department.

“Jodi has the exceptional experience and training that allow her to proactively identify and resolve problems,” said ASU President Michael M. Crow. “Her background in education and in dealing with gender discrimination issues will help move the university even further in the prevention of sexual harassment and violence.”

Today’s appointment was the latest step in the university’s ongoing efforts to prevent sexual violence, a problem that has manifested itself on campuses nationwide. It also marked the enactment of another recommendation made by the Sexual Violence Prevention Task Force that Crow appointed last summer. The group’s recommendations, submitted in November and approved by Crow, included appointing a senior level administrator charged with organizing and coordinating efforts focused on sexual violence awareness, education and support.

ASU has made important strides on a variety of other recommendations made by the task force, including:

• The Sun Devil Support Network, a peer advocate network for students who have experienced sexual violence, has recruited its first class and begins training this month with 35 students.

• 21,252 students have completed “Consent and Respect,” required online training for all students that began in November.

• 7,600 incoming freshmen confirmed they have read the ABOR Student Code of Conduct, and a new interactive module is being developed for next fall for all incoming students.

• More than 150 participants from a variety of offices across campus participated in a two-day Title IX training that covered reporting responsibilities and investigations.

• A campus culture task force committee is designing two bi-annual survey instruments: one that measures perceptions and awareness of ASU resources, and another that measures the prevalence of sexual violence. Both will provide benchmarks for year-over-year comparisons.

The LINAU: Mastering Leadership (ML) program is specifically for mid-level managers who already supervise classified and university staff members. The LINAU: ML program has graduated almost 80 leaders since 2010 and is one of two OHR training classes known as Leadership in the New American University (LINAU).

“The LINAU program goal is to foster leaders who can contribute to building the New American University,” said Cory Dillon, OHR’s director of leadership and workforce development. According to Dillon, more than 25 percent of the graduates have been either promoted at the university or taken a higher-level position outside the university.

• tracking ASU’s more than 12,000 capital assets scattered throughout the world
• retention strategies to retain valuable staff members
• ways for program graduates to continue their leadership development while also giving back to this training program

“This year, we also added a module on talent management and succession planning to foster staff career growth and encourage leaders to take a 30,000 foot view of their bench strength and address concerns,” Dillon said.

To further the learning experience, each team includes people with differing personalities, communication preferences and work experiences. On seven of the eight program days, participants must do presentations, which help them physically understand the concepts of presence, leadership and the centered state. They also learn to manage touchy situations with a mix of objectivity and curiosity.

The 16 most recent graduates were honored at a Dec. 4 celebration that featured presentations on their three business projects, a celebratory luncheon and certificates of completion. The 2014 class included 16 participants from across the university:

10 participants from Business and Finance units:

• College of Liberal Arts and Sciences School of Mathematics and Statistical Sciences and School of Social Transformation
• Ira A. Fulton School of Sustainable Engineering and the Built Environment
• Office of Knowledge Enterprise Development
• Provost’s Office of Academic Partnerships

Following the Dec. 4 presentations, OHR committed to applying many of the recommended retention strategies. Morgan Olsen, executive vice president, treasurer and chief financial officer at ASU, immediately committed to support the initiative to encourage program graduates to give back to the program. The third project, tracking capital assets, will be continued this year to add depth and develop specific, workable solutions.

The ASU Office of Business and Finance, and its units that nominate program participants, fund the training program. LINAU: ML is currently accepting nominations and applications until Feb. 1 for its 2015 program, which begins March 24.