Arizona State University ranks among the best schools in the nation for graduate programs, according to the U.S. News & World Report 2014 edition of “America’s Best Graduate Schools” which lists a number of programs in the top tier.

Among the areas that ASU placed in the rankings are: 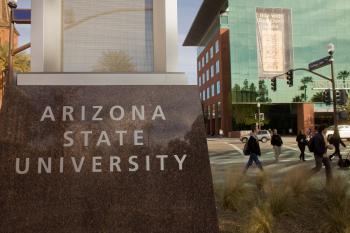 • Among online graduate business degree programs, ASU ranked No. 2 overall. The W. P. Carey School of Business is ranked No. 6 in the nation in supply chain/logistics, No. 22 for its part-time MBA program and No. 30 among the nation’s top business schools. The school also was No. 36 for its doctoral program in economics.

• ASU was No. 2 for its city management and urban policy graduate program, and public affairs master's programs at ASU are ranked No. 16 overall.

• ASU’s doctoral program in criminology is No. 12 overall.

• Education programs overall are at No. 24 in the country for graduate programs.

• The Sandra Day O’Connor College of Law was No. 5 in legal writing. Overall, the school is No. 29 among top schools for graduate programs.

• Among specialties, ASU is ranked No. 17 for the earth sciences doctoral program.

• ASU placed No. 21 for its master's programs in nursing.

• ASU ranked No. 22 overall for its Master of Fine Arts program in art, No. 5 for printmaking, seventh for ceramics and 11th for photography graduate programs.

• Engineering at ASU came in at No. 44 overall among graduate programs in the nation.

• The psychology doctoral program at ASU ranked No. 38 overall.

The Sandra Day O’Connor College of Law at Arizona State University continues its success among the nation’s leading law schools at No. 29. The College of Law’s Legal Method and Writing Program ranks No. 5 among all law schools and reflects the school’s effort and resources devoted to the program with eight full-time faculty with more than 70 years of combined teaching experience and myriad courses that are offered.

ASU named one of the best earth science schools

According to U.S. News & World Report's 2013 ranking, the School of Earth and Space Exploration at ASU ranks among the top 20 graduate schools in the country.

ASU named one of the best earth science schools

According to U.S. News & World Report’s 2013 edition of “America’s Best Graduate Schools,” the School of Earth and Space Exploration at Arizona State University ranks among the top 20 graduate schools in the country.

This year, two out of four specialty earth science programs were ranked in the top 20 in the nation. These include geochemistry (ranked 16th) and geology (ranked 17th).

As a result of its strong, diversified team, the school has become involved in a number of high-profile projects, such as the National Science Foundation’s EarthScope program and the development of geologic training programs for NASA’s astronaut candidate class, all of which have dramatically increased the visibility and standing of the school.

This ranking, however, does not reflect the teaching and research efforts of the school’s faculty in astronomy, astrophysics, and cosmology.