His wife, Linda, was diagnosed with an aggressive form of breast cancer in 2003, just months after the couple moved from Phoenix to New York. He’d already lost his mother to breast cancer, a year after he and Linda got married. Then, two weeks after Linda was diagnosed, so was Bob’s sister. 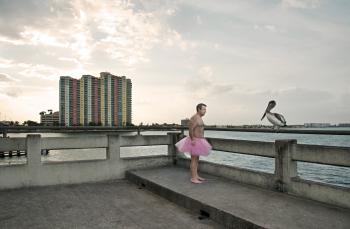 “It was a very difficult time,” Carey says. And so he did what he always does when he’s having a difficult time: He started taking pictures of himself.

“I’ve always gone the creative route when I’m not feeling good,” said Carey, who earned a bachelor's in art (photography) from the Arizona State University School of Art in 1985.

The tutu was left over from a job he had done for Ballet Arizona. He says he’s not sure why he hung on to it, why he took it with him from Phoenix to the East Coast. But the resulting photographs made sense to Carey, and to Linda.

In 2006, Linda’s cancer returned, this time in her liver.

“She had to go back to the center and have chemo,” Carey said. “She would bring the (tutu) images to the center (on her phone), show the other patients, her friends, and it made them happy.”

Linda thinks that people liked knowing that Bob was making the images for her as well as for himself. And they could identify with both the humor and the vulnerability in the photographs, and with the man in the pink tutu.

“It’s just amazing to watch it happen,” Linda has said of the moment when Bob puts on the tutu for a photograph. “It is like, you know, when the superhero puts on the cape. There’s a transformation there.”

Seeing the positive effect of the tutu images, Bob and Linda wanted to share them more widely. They raised enough money to self-publish the photography book “Ballerina,” and from there, the Tutu Project exploded, with appearances on the “Today” show, a story on BuzzFeed that received more than 3 million views and, recently, a commercial in Germany for the telecommunications company Deutsche Telekom.

"(Deutsche Telekom) told our story, and at the end, they showed people sharing our story with their devices," Carey said. “And now we’re like celebrities over there. People chase us when we walk down the street.”

In 2012, Bob and Linda established the Carey Foundation, a nonprofit organization that provides financial support for women with breast cancer and their families. Proceeds from “Ballerina” and from a new Tutu Project calendar go to the foundation, which Linda runs. “It has been her dream,” Carey said, “to help other women with breast cancer. I think this whole project has helped Linda a lot.”

As for Carey, the Tutu Project has taken him in some unexpected directions.

The self-portraits he did in the 90s, before Linda’s diagnosis, are very different from his current work. They’re black and white photographs in which Carey’s body and face are distorted almost beyond recognition. The images are dark and somewhat discomforting, but they’re also poignant, and some verge on being funny.

But according to James Hajicek, one of Carey’s professors at ASU and still a close friend, the differences between Carey’s earlier work and his work now are “only surface differences.”

“With Bob’s work, even though what’s in front of the camera might change, his work is so much about what’s behind the camera; it’s about him. That changes as Bob changes and Bob grows. But in a sense, too, it doesn’t change.

"He ultimately gets down to what it is to be human, and that’s what the common denominator of his work is, whether it’s him in a tutu or him wrapped up in a steel wire, or whether it’s a movie of him running up a hill. It’s all his journey of trying to understand himself, the world and his place in it ­– and that’s what we’re all trying to do,” Hajicek says.

Carey credits Hajicek and ASU with giving him the tools he needed both for his art and for his life. He says that he was already working as a professional photographer when he decided to go to ASU for a degree, and that some of his colleagues questioned his decision.

“My mom was the one who pushed (me to go to ASU),” Carey said. “She was the only kid out of six kids that graduated from college, and she’d graduated from ASU with a degree in education. She was an elementary school teacher.”

Today, Carey says, he knows that his mother was right.

“I hated art history,” Carey admitted, “but I learned so much about art through art history. I think I learned more about composition and light and color in art history than I did doing any of the other studio courses. There’s no way I would have done that on my own.”

That understanding of composition, light and color – combined with Carey’s empathetic eye and heart – is what makes the images from the Tutu Project indelible.

Now, supported by partners like Bloomingdale’s department store, the Careys and their foundation are “able to do a lot of good.” They’re broadening their scope to include men as well as women with breast cancer and their families, and shifting their fundraising efforts “into high gear.”

At the end of this month, Bob and Linda will lead dozens of people in a “tutu walk,” as part of the famous Halloween parade in New York’s Greenwich Village.

“We’re just so happy that we can help other people,” Carey said, “and it’s not just about us any more.”

Martin J. (“Jack”) Fouquette, Jr., a devoted teacher and accomplished scholar, who published one of the only thorough documentations of reproductive character displacement in amphibians, died Aug. 28, in Chandler, Arizona. He was 84.

An emeritus professor with ASU’s School of Life Sciences, Fouquette was born in Philadelphia in 1930, but eventually moved to Texas. After attending public school in Kerrville, he made the short move to the University of Texas, Austin, where he originally studied chemistry to make his parents happy. 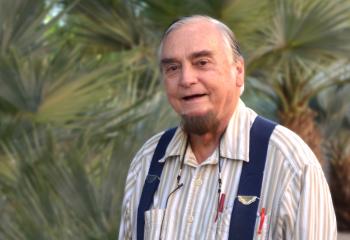 However, he had developed an interest in snakes during high school that continued to nag at him. That interest, and exposure to the late UT professor Frank Blair’s lab, pushed Fouquette to change his major to zoology.

After earning his bachelor’s degree, he pursued a master’s with Blair as his mentor. Fouquette started graduate school studying garter snakes, but Blair advised him to acquire newly developed recording equipment and switch his research focus to anuran frogs in Central America for his doctorate.

Because of this, Fouquette joined the U.S. Air Force and requested an assignment in Panama. He served as a seaplane navigator in the air rescue branch, traveling to the Canal Zone in his off time to record the mating calls of frogs. Following his four years in the air force, Fouquette returned to UT and used his data to finish his doctorate in 1959.

The 1970s was a busy decade for Fouquette in terms of his own research and the students he mentored. One of his greatest career moments came in 1975 when Fouquette published what was one of the only thorough documentations of reproductive character displacement, a rare phenomenon among amphibians. In addition, he signed off on many dissertations and theses for students who went on to become successful herpetologists.

“Jack was one to let students have a free reign, and he influenced their growth and development with nuance and subtlety,” said Brian Sullivan, a professor with ASU’s School of Mathematical and Natural Sciences and former student of Fouquette’s. “Jack had a special characteristic that set him apart from others, one that allowed students and some faculty members at ASU to look with envy at his relationship with his productive students.”

Fouquette remained involved in the field of herpetology, even through this past summer. He often attended informal meetings in the Phoenix area, delighting his peers with stories and photos of his recent trips.

“Jack was simply one of the nicest people I ever encountered,” said Laurie Vitt, a widely renowned herpetologist at the University of Oklahoma and one of Fouquette’s most successful students. “He wasn’t pushy, he wasn’t arrogant, and he seemed to have a level of integrity that I now know is much rarer in academia than we would like to think.”

Fouquette is survived by his wife, Elena, his three children, David Fouquette, Hyla Mendez and Mari Firago, as well as two grandchildren.

A memorial service was held Sept. 5 to celebrate Fouquette’s life.