Tatiana Jenkins first encountered eAdvisor, one of Arizona State University’s tools to help students succeed, before she even applied to college.

She went online when she was still in high school to discover what she could study that would couple her interest in public service with her curiosity about international relations. 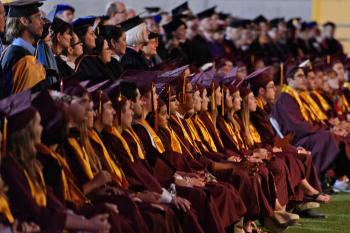 “I didn’t know which major would be more tailored to what I specifically liked,” Jenkins, now a junior political science major, said. “So I got to explore the different majors, the different certificates.”

Three years into her ASU career, Jenkins is now something of an eAdvisor super-user. She utilizes the tool, which prescribes a pathway to graduate in all of ASU’s 370 undergraduate majors, to guide her own education, and she works to assist younger students in staying the course as well.

She counts herself as someone who has benefited from the eAdvisor system.

“It puts more responsibility on me, but it also gives me more tools so I’m not just filling my classes up with dance credits or physical education credits that have nothing to do with my major,” she said. “I’m filling it up with things that will help me graduate in four years and not be off track.”

Staying on track is key to a student’s success. The university’s four-year graduation rate has increased nearly 20 percentage points since 2002, with the largest increase starting in 2007, after eAdvisor was launched.

That dramatic improvement is the result of ASU’s deep investment in integrating technology like eAdvisor into the learning experience, and experimenting with new ways to keep students on the path toward earning a degree.

“ASU is committed not only to being accessible to students, but we are committed to their success once they get here,” said ASU Provost Robert E. Page Jr. “The innovation and student-centric education that is happening at ASU will help to improve higher education throughout the country.”

eAdvisor isn’t the only change the university has made to help students succeed.

ASU instituted a first-year seminar course called ASU 101. Students learn time-management and academic integrity, but are also introduced to the values of the university, including its focus on sustainability and entrepreneurship. ASU 101 teaches all entering freshman best practices to be academically successful in college.

The university also created residential communities in which students in individual schools live together. Administrators say this allows college staff, some of whom live in the halls themselves, to know where their students are, and help keep them on target if their grades start to slip.

Deans at individual schools and colleges were also asked to become more responsible for their students’ academic outcomes.

“The deans were shown their numbers and given targets,” said Frederick Corey, vice provost for undergraduate education. “Each one had to submit a report saying exactly what they were going to do to improve retention.”

Each of these programs helped to increase academic success and contributed to the improvement in graduation rates.

Even with the measurable success, ASU continues to do more to learn how to improve student outcomes.

In the fall 2014 semester, Art Blakemore, senior vice provost, led a pilot program called Learn-Explore-Advance-Design (LEAD) to test an interdisciplinary approach to teaching three subject areas: communication; critical reading and writing; and academic success. One hundred students learned in a “flipped classroom,” where lectures and presentations were placed online, and in-class time was spent collaborating on projects related to the material. They also got more individualized attention from faculty.

“Now the question is, can we scale it?” Corey said, referring to a critical question at a university the size of ASU: How will something like the LEAD program work when it is applied to thousands of students instead of just a fraction of that?

It is that kind of experimenting that has led to the success of programs like eAdvisor, which not only describes courses and majors, but allows students to see exactly what courses they need to take, what semester they need to take them in and what grades they need to get to stay in the major.

For Jenkins, the political science junior, that kind of innovation brings a school the size of ASU within reach.

“I’m not overwhelmed with all the information…” she said. “It’s just having all the options condensed for you, and then you can fit that into how you learn and how you want to graduate.”

Downtown Phoenix has undergone a major transformation since the last time the Super Bowl was in town, thanks in large part to the time and investment of Arizona State University.

When Super Bowl XLIX comes to town, it brings with it more than just the most-watched sporting event in the country.

More than a week’s worth of festivities will lead up to the kickoff – and most of them are taking place in downtown Phoenix, away from the big game in Glendale. 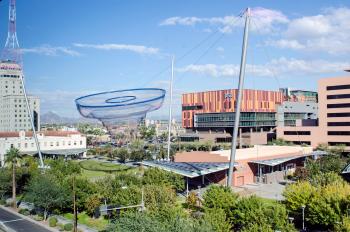 That was not the case in 2008, the last time Arizona hosted the Super Bowl.

That’s because downtown has undergone a major transformation in the last seven years, thanks in large part to the time and investment of Arizona State University.

“Over those years, and really over a short period of time, we’ve seen remarkable changes here,” said Christopher Callahan, founding dean of the Walter Cronkite School of Journalism and Mass Communication, which is located on ASU’s Downtown Phoenix campus. “ASU has certainly not been the only catalyst, but I would say a significant catalyst in the rebirth of downtown Phoenix.”

The last time the Super Bowl was here, ASU’s Downtown Phoenix campus had only been open two years, and had an enrollment of fewer than 5,000 students. The Cronkite School was still located in Tempe, and the Cityscape mixed-use development a few blocks away from campus wasn’t even built yet.

“The city was hoping that a major campus like Arizona State University would invigorate downtown with young people who were not only going to be studying here, but working here and living here," Callahan said. "I think it’s done exactly that."

Today the Downtown Phoenix campus has more than 11,000 students, and in November, ASU broke ground on the Arizona Center for Law and Society that will serve as the new home for the Sandra Day O’Connor College of Law, which is set to open in August 2016.

“ASU has brought a huge amount of vibrancy to downtown,” said David Roderique, president and CEO of the Downtown Phoenix Partnership. “I mean, obviously with [the thousands of] students, plus the faculty and staff and visitors and so on, it has created a tremendous sense of place for downtown.”

There have been many other additions since 2008 as well.

Civic Space Park, which opened in April 2009, replacing desolate storefronts and open lots, is right in the middle of ASU’s Downtown Phoenix campus and is available to the entire downtown community.

The School of Criminology and Criminal Justice and the School of Social Work moved downtown in August 2009; the College of Health Solutions opened in August 2012; and the Student Center in the historic U.S Post Office building opened in March 2013.

The Sun Devil Fitness Center opened in October 2013; the ASU School of Art in the Herberger Institute for Design and the Arts moved some of its studios in early 2014; and the Mary Lou Fulton Teacher’s College starting offering classes downtown in early 2014 as well.

“More than anything, it’s the vibe now,” said Dan Klocke, vice president of development for Downtown Phoenix Inc. “It’s the vibe where people want to be. It’s a great environment that’s getting better all the time, and I think there’s a lot of momentum, and I think that momentum creates a lot of excitement.”

Back in 2008, the Phoenix Convention Center was still under construction and there were 50 percent fewer restaurants and bars downtown, according to the Downtown Phoenix Partnership.

“Obviously you can’t add that many new businesses in that category unless you have people to support them, so ASU has been a big piece of that,” Roderique said.

ASU has also been one of the major contributors to the success of the Phoenix area’s light rail, which connects students on the Tempe and Downtown campuses.

“When President Crow set out his vision for a downtown campus in 2004, he said he wanted this to be a vibrant campus with multiple colleges and eventually up to 15,000 students," Callahan said. "At the time, people were like, ‘Wow really?’ And now we’re right on course to do exactly that."