DECEMBER 12, 2017 — As part of its continued commitment to the Thunderbird School of Global Management, Arizona State University announced today the relocation of the iconic school’s graduate programs, and the Thunderbird Executive Education program, to a new building on its Downtown Phoenix Campus. 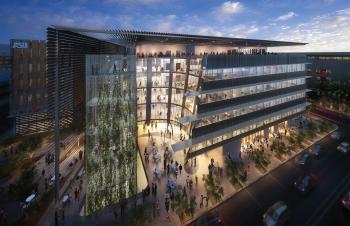 This geographic move reflects the strategic importance ASU places on Thunderbird and its role in the university’s global vision. It represents a significant investment in the school’s continued excellence long into the future.

“Locating Thunderbird with other ASU schools and departments on the Downtown Phoenix campus will provide greater community embeddedness and enhanced resources for Thunderbird students and faculty,” ASU President Michael M. Crow said. “This move also brings Thunderbird closer to other university schools and departments and to the private- and public-sector forces in downtown Phoenix that are engaged in international business and non-profit organizational activity.”

Allen Morrison, CEO and director general of Thunderbird, who has led the school since its merger with ASU in 2014, called the move “an exciting new chapter in the history of a transformational institution.”

“This is an incredible opportunity for Thunderbird to broaden its mission and have an even greater impact on students and the businesses and organizations with which the school partners,” Morrison said.

“This is an exciting and important moment for the entire region,” Phoenix Mayor Greg Stanton said. “Thunderbird’s presence downtown will continue to enhance our competitiveness as we build an economy that competes on a global scale.”

An exciting future for the existing campus

ASU Enterprise Partners, a not-for-profit organization, has initiated discussions with Glendale officials to discuss the creation of a new master plan for the 140-acre site.

These planning efforts will be designed to catalyze economic development in the West Valley and accelerate the pace of growth and diversification of economic opportunity.

“What we really look forward to is the opportunity to work with the city and the community on their aspirations for the property,” said Rick Shangraw, the CEO of ASU Enterprise Partners.

The Thunderbird brand will remain connected to the West Valley. ASU’s West Campus in Glendale is home to Thunderbird’s undergraduate program, the Thunderbird Academy.

“The city of Glendale has been a wonderful home for Thunderbird over the past 71 years,” Crow said. “We are making a commitment to Glendale and to the entire West Valley to utilize the Thunderbird campus for the benefit of the community.”

The evolution of Thunderbird

In early 2015, just after the university had merged with Thunderbird, Crow spoke of the importance of utilizing ASU’s scale to enhance what makes the school special.

The move to downtown Phoenix provides the opportunity to evaluate the curriculum in light of the interdisciplinary options now available through proximity to other ASU schools and colleges, while continuing to provide world-class global management and business education with a unique intercultural focus.

“After careful evaluation and efforts over the past three years to consider alternatives, we believe this move will provide benefits for all involved,” Crow said. “Thunderbird has an enormous amount to offer to ASU, to the city of Phoenix, to statewide efforts in international trade, and to the world.”

Construction of Thunderbird’s new building is expected to be complete in time to welcome students by January 2021. The new building will include space for classrooms, meetings, enclave and office space and will include two levels for executive education. There will also be rooftop function space.

About ASU
Arizona State University has developed a new model for the American Research University, creating an institution that is committed to access, excellence and impact. ASU measures itself by those it includes, not by those it excludes. As the prototype for a New American University, ASU pursues research that contributes to the public good, and ASU assumes major responsibility for the economic, social and cultural vitality of the communities that surround it.

About Thunderbird School of Global Management
Since its inception in 1946, Thunderbird has focused exclusively on educating global leaders in the intricacies of international business and management.  Now a unit of the Arizona State University Knowledge Enterprise, Thunderbird is strengthened by the resources of America’s largest and most innovative public university. Thunderbird offers both graduate and undergraduate degrees as well as executive education in locations around the globe, with its main campus in Glendale, Arizona and offices in Geneva, Dubai, and Moscow.

About ASU Enterprise Partners
Enterprise Partners is a not-for-profit organization based in Tempe, Arizona and made up of distinct entities that raise, create and invest resources for the benefit of Arizona State University while advocating for and advancing ASU’s mission and brand.