Expansion of our ancestor’s diet millions of years ago may have been a transformational stage in our ecological and evolutionary history. In four related research articles, scientists argue that human ancestors living 3.5 million years ago were the first hominins – species more closely related to humans than to chimpanzees – to show evidence of expanded preferences in their plant diet. The addition of tropical grasses and sedges to an ape-like diet set the stage for our modern diet of grains, grasses, and meat and dairy from grazing animals.

Diet has long been implicated as a driving force in human evolution. Changes in the type of food consumed and the manner in which it was gathered have been linked with the growth of the brain and the emergence of bipedalism, as well as ecological, social and cultural evolution within the hominin lineage.

The papers appeared in the June 3 issue of the Proceedings of the National Academy of Sciences. Most of the funding for the research was through grants from the National Science Foundation.

Two of the papers, “Isotopic evidence of early hominin diets: Past, present, and future” and “Diet of Australopithecus afarensis from the Pliocene Hadar Formation, Ethiopia,” include Institute of Human Origins (IHO) director William Kimbel and research associate Kaye Reed as coauthors among a group of researchers from across the U.S.

Australopithecus afarensis was discovered and named by a team led by IHO founding director, Donald Johanson, who found the fossil skeleton "Lucy" at Hadar, Ethiopia in 1974. Kimbel and Reed are professors in the School of Human Evolution and Social Change in the College of Liberal Arts and Sciences.

In the new work, the scientists used carbon isotope analysis to extract the dietary signal from fossilized teeth of African hominin species dating from 4.5-1.5 million years ago.

Isotope analysis is based on the concept that “you are what you eat.” The carbon isotopic composition of past meals is incorporated into the forming tooth enamel, frozen in time, yet recoverable after millions of years. Carbon isotopes are especially valuable for distinguishing diets based on “C3” or “C4” plants, which differ in how efficiently carbon is recovered during photosynthesis. C3 plants include trees, shrubs and herbs, and predominate in forested conditions or around well-watered areas. C4 plants are the grasses and sedges that inhabit primarily open environments. In living animals, carbon isotope ratios in tooth enamel readily distinguish grass feeders, like zebras and wildebeests, from fruit or leaf eaters, like chimpanzees and giraffes.

Scientists have collected carbon isotope data from 173 specimens representing 11 early hominin species ranging in age from 4.4 million years ago to 1.3 million years ago. In the new research, A. afarensis from the Hadar and Dikika sites in Ethiopia was analyzed for the first time.

The diets of the earliest hominin species, Ardipithecus ramidus and Australopithecus anamensis from 4.4 to 4 million years ago, were dominated by C3 plants. But beginning around 3.5 million years ago, data from Hadar and Dikika in Ethiopia and West Turkana in Kenya show that A. afarensis and another species called Kenyanthropus platyops consumed foods from both C4 and C3 plant communities. This expansion in dietary preference represents the first use of C4 plant foods that had been abundant in the environment for at least one million years. All subsequent hominin species were capable of consuming both C3 and C4 foods, a flexible adaptation that was inherited by modern humans.

“We knew that before four million years ago, hominins had ape-like diets from an isotopic perspective and that after three million years ago, the diet had expanded to include a wide array of novel resources,” observed Kimbel. “The time period of A. afarensis is key to pinning down exactly when this transition occurred.”

What environmental factors may have led A. afarensis to expand its diet, and to exploit a larger range of habitats than any human ancestor species before it, is the subject of the next stage of research.

“We have no idea what parts of C4 plants A. afarensis was eating,” noted IHO’s Kaye Reed. “Was it seeds, blades of grass or roots? The most interesting finding to me is that some A. afarensis individuals utilized C4 plants almost exclusively, while other individuals within the same time period ate mostly C3 plant species. This high degree of variation is not what one sees in populations of chimpanzees, for example, so the fact that A. afarensis individuals have different diets was not expected.”

The Institute of Human Origins is one of the preeminent research organizations in the world devoted to the science of human origins. A research center of the College of Liberal Arts and Sciences in the School of Human Evolution and Social Change, IHO pursues an integrative strategy for research and discovery central to its 30-year-old founding mission, bridging social, earth and life science approaches to the most important questions concerning the course, causes and timing of events in the human career over deep time. IHO fosters public awareness of human origins and its relevance to contemporary society through innovative outreach programs that create timely, accurate information for both education and lay communities.

Published June 3, 2013 in the Proceedings of the National Academy of Sciences:

(1) “Diet of Australopithecus afarensis from the Pliocene Hadar Formation, Ethiopia.”

School of Criminology and Criminal Justice doctoral student Gabriel Cesar received the "Free to Inspire 2013" mentor award at a recent volunteer appreciation event for Free Arts of Arizona. Cesar volunteers every Saturday at a West Valley group home for boys ages six to 16 in foster care.

“For me, the Free to Inspire Award from Free Arts of Arizona means a lot,” said Cesar. “Because honestly, I have never really known if I was doing mentoring right.” 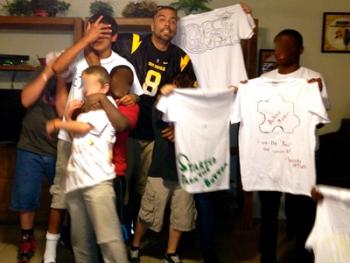 He is one of about 500 Free Arts volunteers that bring visual art, creative writing, music, theater and dance to abused, neglected and homeless children living in more than 100 group homes, treatment centers and shelters in Maricopa County. The goal is to build trust, social skills and improve the self esteem of children that have few reasons to feel confident.

Working on arts and crafts projects, like building piñatas or decorating t-shirts, Cesar provides a creative outlet for their energy. He’s also taught the boys - who he calls “group homies” - how to plan and make basic meals, and bakes cakes and cupcakes with them for birthdays. He uses the occasions to get the boys to open up about their families and show them that men can cook, too.

“I never pictured myself being a role model for kids,” Cesar said. “Last I remember, I was a scared kid myself. I certainly do not have all the answers for the boys I work with, but what any kid needs most is for someone to just pay attention to them. Having incarcerated or deported parents, living through abuse and neglect, or being young and alone does not change that the way you might think.”

Cesar began volunteering three years ago after he graduated with his bachelor’s degree in criminology and criminal justice from Arizona State University. Cesar went on to earn a master’s degree, and is now a second-year doctoral student in the ASU School of Criminology and Criminal Justice. He spends three to four hours every Saturday at the group home. He’s also there for birthdays, holidays and special occasions – like graduations.

One of the first things a new kid will ask Cesar is how much he gets paid to come see them. As a criminologist who has studied post-incarceration programming with professor Kevin Wright, Cesar said he’s happy to tell them that he doesn't get paid at all.

“I generally joke that they could never pay me enough to put up with all those crazy kids,” Cesar said. “I make sure the boys I mentor know that the only reason I would come every week, toting art supplies or cooking ingredients – or my infamous stack of poetry/story/description journals – is because I care about them. And I would never want a scared kid to have to be all alone in the world.”

Cesar can relate to many of the issues the boys go through. School always came easy, but growing up in Detroit, he got into enough trouble to get kicked out of high school. And if his street cred is not enough, there is always Cesar’s large stature, clever wit and deep raspy voice, which can be intimidating - at least, at first. What they find is a trusting adult who lets them be kids.

“A lot of the time I am just horse-playing with the boys, or listening to their stories about school, or girls, or whatever,” Cesar said. “In the end, I’m just being myself, and the kids respond to that.”

Carmen Trujillo has seen that first-hand as Cesar's mentorship partner. The criminology and criminal justice undergraduate student has volunteered with Cesar the past three years. She said the roughhousing is a release for the boys, giving them a way to deal with the stress they face as children living without their parents.

“Gabriel effortlessly holds these young men accountable for who they are as people that we all share space with,” said Trujillo. “In that respect, he makes them realize what they do matters, and they should look out for each other and others. He does this with sort of a ‘pass-it-on’ approach.”

Due to academic responsibilities, Cesar was unable to attend the awards ceremony to receive the Free to Inspire 2013 Award, but listened in by cell phone as one of his “group homies” accepted the award on his behalf.

“The young man that opened the door for us three years ago on our first day at the group home actually spoke on his behalf,” Trujillo said. “It was very touching, yet very 'manly,' which was fitting for Gabriel.”