Age and the decline in crime

Probation officers see firsthand the effect age has on crime. Typically, an offender will commit fewer crimes as he or she ages.

“Essentially, crime peaks around age 17, 18,” said Gary Sweeten, an associate professor at the School of Criminology and Criminal Justice at Arizona State University. “There is a rapid increase in the teenage years up to that point and then, almost as rapid of a decline after that point and continued declines throughout the life course.” 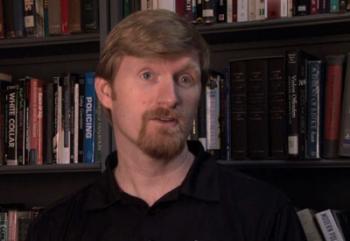 The question is why?

Developmental criminological theories identify numerous life changes associated with getting older that are tied with reductions in crime: stable employment, good marriages, having kids and temperamental changes, for example. However, one prominent criminological viewpoint holds that the relationship between age and crime is inexplicable. It cannot be explained by life changes associated with aging. This “inexplicability” hypothesis, which has gone largely unchallenged for 30 years, interested Sweeten.

“They (researchers) suggested that age affects crime directly,” Sweeten said, “and we do not have any sociological or psychological explanation available to use to account for that effect.”

Along with Alex Piquero of the University of Texas at Dallas and Laurence Steinberg at Temple University, Sweeten examined data from a longitudinal study called Pathways to Desistance, which followed 1,300 serious juvenile offenders in Phoenix and Philadelphia over a seven-year period. Their article, “Age and the Explanation of Crime, Revisited,” will be published in the Journal of Youth and Adolescence and is currently available online.

“The unique aspect of this dataset that really sparked our interest in using it for this study was the breadth of information that was measured at each wave,” said Sweeten. “So we were able to control for 40 different things that were changing over these seven years.”

Among the changes they measured were the effect of social control, such as employment and marriage; procedural justice, such as perceptions of the legitimacy and fairness of the legal system; learning, such as gang membership and exposure to antisocial peers; strain, such as victimization and relationship breakup; psychosocial maturity, such as impulse control, self-regulation and moral disengagement; and rational choice, such as costs and rewards of crime.

“We looked at all these simultaneously,” said Sweeten. “And what we were trying to see is – starting from the age crime curve that we see in these data – what would happen if you took all those variables and held them constant? How much of a decline in crime would you see? And that would be the direct effect of age on crime. The goal was to eliminate that effect, to fully explain the effect of age on crime.”

Sweeten said he and his colleagues were able to explain more than two-thirds of the drop in crime between the ages of 15 to 25 using the 40 variables, but couldn’t account for the remaining 30 percent.

“We found significant explanations for changes in crime from all the theories we tested – every one of them,” noted Sweeten.

The strongest explanation involved social learning theory, accounting for 49 percent of the drop in crime from age 15 to 25. Factors that contributed included exposure to antisocial peers, antisocial peer pressure and gangs. The next strongest explanation for the crime drop came from strain theory. Such variables as mobility, homelessness, victimization and witnessing victimization contributed to a 40-percent decline in crime. Psychosocial variables accounted for a 24-percent drop in crime and social control theory a 26-percent decline. The latter involved such factors as whether an offender was in a relationship, had children, attended school, or was on probation. A total of 16 of the 40 measured variables proved statistically significant.

“It’s a complicated story," Sweeten said. "We don’t point to one single thing that causes crime, so there’s no silver bullet. Lots of things are changing, so the approach to trying to reduce crime should be multifaceted. It should focus on delinquent peer association, psychosocial bonds, strain, psychosocial functioning – all these different things all at the same time.”

Sweeten suspected he and his colleagues might be able to fully explain the age effect of the drop in crime, particularly with the breadth of variables they were looking at.

“I thought there was a good change we could knock out the age effect,” Sweeten said. “So, that kind of surprised me, actually. That there is still a direct effect of age despite all the things we controlled for. So to me, it’s a call for more research, it’s a call to better understand what’s going on.”

The challenge, acknowledges Sweeten, is finding a dataset such as the one used that measures many variables over time.

The National Drug Take Back program allows individuals to turn in unused or expired prescription medication for safe disposal.

The ASU Police Department and ASU Wellness will participate in the National Drug Take Back program sponsored by the Drug Enforcement Administration on April 23 at the Tempe campus. This program allows individuals to turn in unused or expired prescription medication for safe disposal.

Students, faculty, staff and members of the public may drop off prescription medication at the ASU Tempe campus Farmer’s Market from 9 a.m. to 2 p.m. on Tuesday, April 23, on Orange Mall west of the Memorial Union. ASU Police Department personnel will be running the drug take back program.

Solid and liquid medications are accepted, but liquids such as cough syrup should remain sealed in original containers. Please seal the cap tightly to prevent leakage.

Intra-venous solutions, injectable drugs and syringes will not be accepted due to potential hazards from blood-borne pathogens.