Arizona State University’s Center for Science and the Imagination and Project Humanities will present the latest installment of the Science Fiction TV Dinner series at 6 p.m., Jan. 22, at the Marston Exploration Theater on ASU’s Tempe campus.

The event, focused on the television series "Dollhouse," will feature one of its stars, Harry Lennix,* whose credits include the films "Man of Steel," "Ray," "The Matrix: Reloaded" and "Revolutions," and NBC's new hit series "The Blacklist."

The event is free and open to the public, with reservations requested through dollhousetvdinner.eventbrite.com. Dinner and beverages, including a vegan option, will be provided for free to attendees.

The Science Fiction TV Dinner series is a launch pad for imaginative, engaging conversations about science, technology, art and society. Founded in 2012, the series has developed an enthusiastic following on and off campus, providing the opportunity for people of all ages and backgrounds to come together, learn and explore visions of the future in an entertaining and informal setting. Previous events have featured episodes of popular science fiction shows, such as "The Walking Dead," "Star Trek" and "The Jetsons."

This installment of the series will feature a screening of “Ghost,” the premiere episode of "Dollhouse," created by celebrated screenwriter, director and producer Joss Whedon ("The Avengers," "Firefly," "Buffy the Vampire Slayer"). The series imagines a future where neuroscience enables human personalities to be uploaded, reconfigured and downloaded into brains – or erased entirely. It wrestles with the ethical implications and technical challenges of “mind-wiping” while following the adventures of a group of clandestine operatives (“Dolls”) who are neurologically programmed to complete secret missions for wealthy clients.

Lennix plays the character Boyd Langdon, an ex-police officer and one of the “Handlers" who monitors and coordinates the activities of the Dolls. He stars alongside Eliza Dushku, who plays the series’ protagonist, Echo, as well as Fran Kranz, Tahmoh Penikett and Olivia Williams.

Following the screening, Center for Science and the Imagination assistant director Ruth Wylie will moderate a conversation with Lennix and Mary Lu Bushnell, a neuropsychologist at the Phoenix VA Medical Center and an appointed member to the Arizona Governor’s Council on Spinal and Head Injuries.

“The Science Fiction TV Dinner series uses compelling stories as a gateway to important issues in science and technology, as well as ethics and society,” says Wylie. “I’m excited to talk with Harry Lennix and Mary Lu Bushnell about the imagination and artistry that goes into creating "Dollhouse's" vision of the future, and the emerging neuroscience that underpins that vision.”

“Project Humanities is excited to be partnering again with CSI, this time in bringing back to ASU a dear friend and colleague, the accomplished Harry Lennix, who appreciates what we are doing to underscore the value of humanities and the arts in a moment where they still, for too many, seem afterthoughts, rather than essentials to our everyday living,” says Neal A. Lester, founding director of the award-winning Project Humanities.

For more information about the event and to register, visit dollhousetvdinner.eventbrite.com.

*Update, Jan. 21: Lennix will be joining this event via Skype due to an unexpected change to the shooting schedule for his TV show, NBC's “The Blacklist.”

Arizona State University has been selected to receive the 2015 Community Engagement Classification from the Carnegie Foundation for the Advancement of Teaching.

Arizona State University has been selected to receive the 2015 Community Engagement Classification from the Carnegie Foundation for the Advancement of Teaching.

ASU is one of three institutions of higher learning to receive the designation in Arizona, and one of 157 campuses to achieve re-classification nationally. 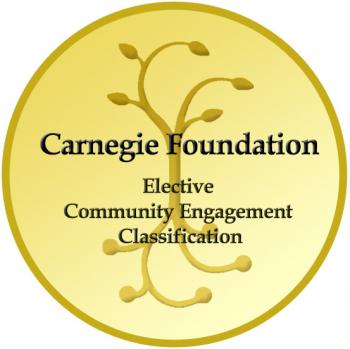 The classification is bestowed upon institutions that have demonstrated their deep engagement with local, regional, national and global communities, according to John Saltmarsh, director of the New England Resource Center for Higher Education, which oversees the application process as a partner of the Carnegie Foundation. Institutions participate voluntarily by submitting materials describing the nature and extent of their engagement in the community.

“These are campuses that are improving teaching and learning, producing research that makes a difference in communities and revitalizing their civic and academic missions,” said Saltmarsh.

ASU shared examples of local and global impact in the following categories of community engagement:

• Foundational indicators: media statements, infrastructure and resource allocation, funding, assessment of impact, student leadership and awards and faculty rewards for service as a mechanism for teaching, research and service.

"We are honored to receive this classification and appreciate the dedication of our community partners, faculty, staff and students who enhance our local impact and social embeddedness," said ASU President Michael M. Crow.

ASU initially received the classification in 2006 and became eligible for re-classification in 2015. It was during this time that ASU rapidly transformed as a socially embedded institution. This transformation included large infrastructure changes, such as the formation of Changemaker Central, ASU SkySong, Access ASU and the Entrepreneurship and Innovation Group, dynamic partnership models such as iTeachAZ and the ASU Mayo Clinic initiative and the community-sparked creation of the Downtown Phoenix campus.

ASU is up for reclassification in 2025, and with the scale of ASU’s evolution seen in the most recent report, the institution’s future impact is promising.

“The Carnegie designation serves as a testament to ASU’s university-wide commitment to the economic, social and cultural vitality of our communities,” said Jacqueline Smith, executive director of University Initiatives and adviser to the president for social embeddedness.