No person in the United States shall, on the basis of sex, be excluded from participation in, be denied the benefits of, or be subjected to discrimination under any education program or activity receiving federal financial assistance.

Inside the Higher Education Amendments of 1972, which President Nixon signed into law, was a small but significant line – just 37 words known as Title IX – that for the first time in history prohibited sex discrimination in education and athletics. 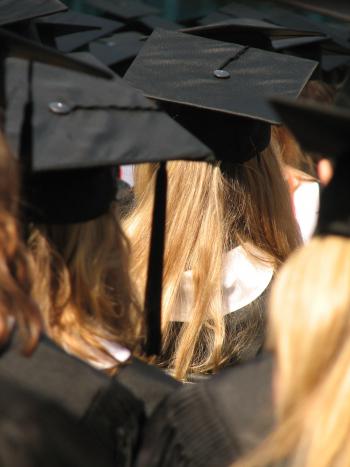 Thanks to the landmark legislation, 40 years later, the workplace, college campuses and athletic fields across the United States look very different from their 1972 predecessors.

The statistics are dramatic:

• In the United States before Title IX, one in 27 girls played high school varsity sports, compared to one in two today.

• Women now make up half the workforce and more than half the total number of undergraduate and graduate students in the United States.

That young women today find it difficult to imagine a world with barriers to education and organized sports also speaks to the impact Title IX has made over the last four decades. However, ASU's Charli Turner Thorne, head coach of the Sun Devil women's basketball team, who is leading the "Every One Wins" season-opening campaign to re-educate today's generation about Title IX, says it's important for young women to know the reason why they are afforded the opportunities they have.

The 'Father of Title IX'

The year was 1971 and then Indiana Senator Birch Bayh had begun work sponsoring a significant piece of legislation – one he feared would be held up in the Senate for years before becoming law – the Equal Rights Amendment. His support of the amendment was inspired by his father's work.

"Birch Bayh, Sr., was superintendent of physical education for the D.C. school system for 30 years," writes Bayh in a personal essay ("Title IX – A Brief Legislative History"). "I'll always remember one morning in 1940 at our family breakfast when Dad told my little sister and me that he was going to be testifying before Congress that day. 'What are you going to tell them, Daddy,' we asked. He said, 'I’m going to tell them that little girls need strong bodies to carry their minds around just like little boys.'”

Bayh says his late wife, Marvella, also helped educate him on gender discrimination that was occurring in higher education. She shared with him her experience of being told by the University of Virginia that "women need not apply."

So in 1971 Bayh saw an opportunity to quickly change equality standards in the United States. He aimed to expedite the passage of the Equal Rights Amendment by adding a new section to the Higher Education Act, which already was on the floor of the Senate up for reauthorization. Together with U.S. Representative Patsy Mink, who faced gender discrimination throughout her educational career, Bayh introduced a new section – Title IX – and moved in the Senate to have it added to the reauthorization bill.

After some debate in the Senate on whether gender was germane to the Higher Education Act, Bayh was able to prove that it was and get the votes he needed – and Title IX was born. Women no longer were denied under the law equal access to academics and sports.

Title IX's economic impact, alone, has been so great its magnitude is nearly impossible to measure. For example, the passage of Title IX has helped lower health costs overall for women who, according to a 2006 study sponsored by the National Bureau of Economic Research, have experienced a sharp lowering in risk of medical problems due to increased physical activity and greater exposure to athletic and health training.

Another recent study by a University of Pennsylvania researcher found a correlation, shortly after the passage of Title IX, between participation in sports and an 8 percent increase in earned wages.

Ayanna Thompson, professor of English at ASU and associate dean of faculty, who serves as president of the Faculty Women's Association, says the legislation was perhaps most significant in that it opened up leadership opportunities for women whether it was on the field or in the workplace.

"The leadership skills women learned on the field translated into their work off the field," says Thompson. "For example, I know that many women in leadership roles in academia started off as athlete-leaders in soccer, softball, volleyball, swimming, etc. Those transferable skills are no different if the players are men or women, but Title IX ensured that women could have access to experiencing them as well.”

The social structures that Title IX created quickly helped usher in opportunities for women right here at Arizona State University. In 1973 the College of Liberal Arts and Sciences issued a Committee Report on the Status of Women to make recommendations on everything from promotion and fair recruitment practices to anti-discrimination statutes. The Arizona Board of Regents followed suit several years later, making similar recommendations on university child care options, salary equity, tenure and general attitude toward women on campus. In the fall of 2011, it was reported that women made up 36 percent of ASU's faculty.

At ASU, women's athletics began expanding and diversifying as well, and by 1977 women's teams had brought home 10 national championships in a variety of sports, including softball, swimming and diving, golf, badminton, tennis and archery. In 1986 the Pac-10 Conference began competition in women's sports.

Currently, nearly 200,000 female athletes are competing on 9,274 NCAA teams – an all-time high that was echoed in last summer's Olympic Games in London. In what has been dubbed the "Title IX Olympics," U.S. women athletes brought home more medals than men for the first time in history – 58 medals to the men's 45, and 29 gold medals to the men's 17.

While more women than ever before are receiving advanced education degrees – many of them in fields from which they were once denied access, such as law – the science, technology, engineering and math (STEM) fields continue to be areas underrepresented by women.

ASU law professor Zachary A. Kramer, associate dean for intellectual life in the Sandra Day O'Connor College of Law, says the gender gap in STEM education supports occupational segregation in the workplace and is therefore one of two significant areas that must be improved in reaching our goal of gender equity in education. The other area, he says, is sexual harassment.

"Solving these sorts of problems is exactly what Title IX set out to do," Kramer says. "By striving for equal treatment on the basis of sex, Title IX seeks to make education a safe and fruitful space for all students."

Tirupalavanam Ganesh, associate professor of engineering education, leads the Girls in Engineering program at ASU. The program encourages young girls to get involved in the hard sciences through hands-on design challenges. Ganesh says women scientists, mathematicians and engineers are needed to enhance U.S. competitiveness and credits the social structures Title IX helped create in at least giving women access to these education fields.

"There was a time, in the not so distant past, when it was not common for women in the United States to gain admission to undergraduate programs in physics," he says. "In fact, they were actually discouraged from even applying."

Today young women are fortunate enough not to have had to face the same obstacles to success their mothers and grandmothers did in 1972 – thanks, in large part, to the progress Title IX has paved for girls and women in the United States. However, creating opportunity for women on a global scale remains to be one of the greatest challenges of the 21st century.

Coach Turner Thorne says opportunity is the simplest thing any of us can hope for in life. Opportunity is what she and her team will be celebrating this Sunday at a special Title IX event to usher in the ASU women's basketball season, when the Sun Devils take on Texas Tech at 2 p.m., in Wells Fargo Arena. In honor of 40 years of women's advancement in education and sports, Arizona State University and Sun Devil Athletics will honor 40 extraordinary individuals at halftime, including Sandra Day O'Connor, the first woman to be appointed to the U.S. Supreme Court.

The best part about Sunday's game? Every One Wins.

The ASU Cesar E. Chavez Leadership Institute has established "¡Viva CCLI!" – an inaugural event that inspires recognition for the success of the 18-year program and its support staff.

The ASU Cesar E. Chavez Leadership Institute has grown up and come of age. “¡Viva CCLI!” is being established as an inaugural event that inspires recognition for the success of the 18-year program and acknowledges the positive impact made by CCLI alumni, ASU faculty and staff and community supporters.

The institute was an initiative established in 1995 by ASU and community leaders seeking to inspire and motivate high school students through the legacy of civil rights leader Cesar E. Chavez. The CCLI was the brainchild of Frank Hidalgo, former assistant vice president for Institutional Advancement at ASU, who saw the need to promote active engagement in extracurricular and community activities from local Hispanic high school students.

Each summer the CCLI invites select Arizona high school sophomores and juniors to attend ASU for a week to learn about higher education as a vehicle for success and servant leadership. The institute is available at no cost to participants, thanks to support from ASU and a handful of sponsors.

To date more than 800 Arizona high school students, including two of Cesar Chavez's granddaughters, have completed the CCLI program. Alumni have gone on to attend ASU and other distinguished universities followed by successful careers in law, medicine, public service, law enforcement and business.

For more information on the CCLI or “¡Viva CCLI!”, visit outreach.asu.edu/ccli/