Last spring, Airi Katsuta watched from her parents’ Ahwatukee home the news broadcasts of the devastating March 11, 2011, earthquake and tsunami that demolished whole cities in Japan, a country she had left 14 years earlier when her family moved to Phoenix.

“When I first saw it I cried, but I thought it was someone else’s problem,’’ Katsuta said. That was then. 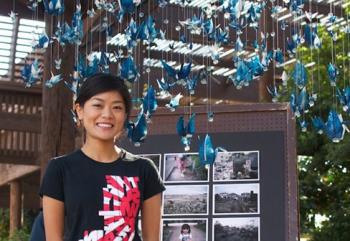 Now the ASU School of Art photography major has been to Ishinomaki, Japan, the coastal city that lost more than 3,000 residents in the massive tsunami. She volunteered there last summer, taking her grandfather’s Minolta 35mm camera and capturing images of devastation and hope along the way.

This summer after she graduates from the Herberger Institute for Design and the Arts, Katsuta plans to return to a country and a people she’s reclaimed as her own to continue her volunteer work and her photography.

“When I went there, it got personal,’’ Katsuta said, talking about the emotional shift from casual concern to deep commitment.

Initially, Katsuta had intended to spend a week volunteering. Her sister, who lives in Japan with their grandparents in an inland city unaffected by the earthquake and tsunami, had already been assisting in relief efforts. But Katsuta was so overcome by the destruction she saw in Ishinomaki and the resilient spirit of its residents that she extended her stay.

“The local people weren’t acting like victims. They were not crying for help,’’ she said. “I worked side by side with the people of Ishinomaki as they began to rebuild their community. Even after the tragedy, people found the strength to remain positive, smile and be grateful.”

It was this attitude that resonated with Katsuta and that prompted her to make 1000 origami cranes.

“Cranes are a national symbol of Japan that are thought of as mythical and holy creatures,” Katsuta said. “Legend has it if you fold one thousand cranes your wish will come true. Not a wish for materialistic objects but for health and recovery.’’

She returned to the ASU Tempe campus last August to complete her senior year and to raise $1,800 for a plane ticket to Tokyo. Her fundraising plan came from the ancient Japanese craft she learned as a child and the modern day Internet.

She also wanted to incorporate a photographic printing process called cyanotype that gives a cyan-blue print to the paper she would fold into cranes. Under the tutelage of Christopher Colville, visiting assistant professor of photography, she experimented with a feather imprint for her elegant cranes that hang in graduated size from a string.

She’s taken her cranes to festivals, markets and fairs and put her fundraising project on kickstarter.com. She has until May 5 to make her goal. As of April 12, she was $570 short with 23 days to go. For a $10 donation, she sends contributors each a string of three cranes and a marble and $100 donors receive two strings of 10 cyanotype cranes and one of her signed archival photographs.

The summer in Japan helping a community rebuild from rubble, also helped Katsuta crystallize her goals. She wants to bring her photographic eye to this place of recovery and resilience. “I’m not a photojournalist,’’ she said. “I realize what I’m good at: noticing the subtle things.”

Her photographs capture what the Japanese call Wabi-sabi, the Japanese aesthetic centered on the exploration of beauty in imperfection and the acceptance of transience, she explained.

Katsuta wants her images to remind people of the massive rebuilding that has been accomplished and what remains to complete after the news cameras and reporters have gone. Eventually, she wants to come back to the states to teach photography and to inspire students as she’s been inspired and encouraged.

“This experience opened my eyes to realize how ephemeral life is and what is essential in between the time. I have learned to appreciate the simple things as it is without it being decorated,’’ she said.

To contribute to her kickstarter fund visit her website, airikatsuta.com.

ASU students are invited to take the field with the Sun Devil football team for the Pigskinpalooza and the Movie on the Field event at Sun Devil Stadium on April 19.

Arizona State University students are invited to take the field with the Sun Devil football team for the Pigskinpalooza and the Movie on the Field event at Sun Devil Stadium on Thursday, April 19.

The first-ever Pigskinpalooza, which starts at 5:30 p.m., gives ASU students the chance to connect with Sun Devil Athletics while at the same time getting the opportunity to participate in activities on Frank Kush Field. Students attending the event will be able to punt, pass and kick with Sun Devil football players.

Following the interactive portion of the event will be the Movie on the Field, as a screening of "The Blind Side" will take place at 8 p.m.

There will be food available in addition to prizes and giveaways from local businesses throughout the evening. In addition, students are encouraged to bring snacks and blankets for the movie.

The event is open to ASU students with a valid Sun Card, and each student is allowed to bring one guest.