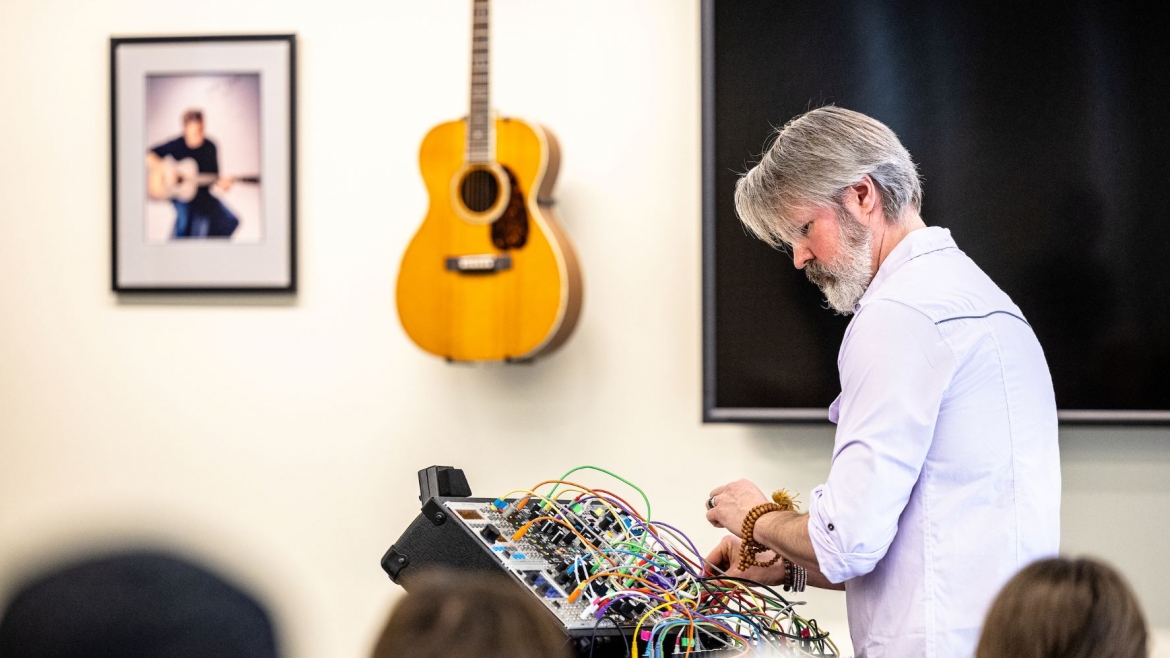 With a few flicks of his wrists, Tony Obr manipulated his modular synthesizer to produce an array of musical tones that ranged from a car door chime to a lawnmower roar.

An assistant teaching professor in the School of Music, Dance and Theatre at Arizona State University, Obr was part of a two-day “Celebration of Electronic Music” at the Musical Instrument Museum in Phoenix on Saturday and Sunday that showcased several people in the ASU community.

Obr’s performance Saturday mixed a bit of recording with improvisation to produce an amazing concert of electronic music.

“In the ‘90s I was kind of a rave kid, so definitely rave parties, techno, that kind of stuff, was very popular in the underground and was my introduction to electronic music,” said Obr, who teaches courses in sound design and music production.

“My journey started by trying to figure out what my favorite artists were doing and trying to reverse engineer that,” he said.

Earlier in the day, Obr participated in a demonstration, showing his modular synthesizer and allowing museum guests to play around with the different plugs.

Elizabeth Scriba of Mesa, Arizona, was able to produce different tones by plugging and unplugging different cables into the synthesizer.

“I love the lighter sounds,” she said. “Usually it’s a lot of darker sounds.” 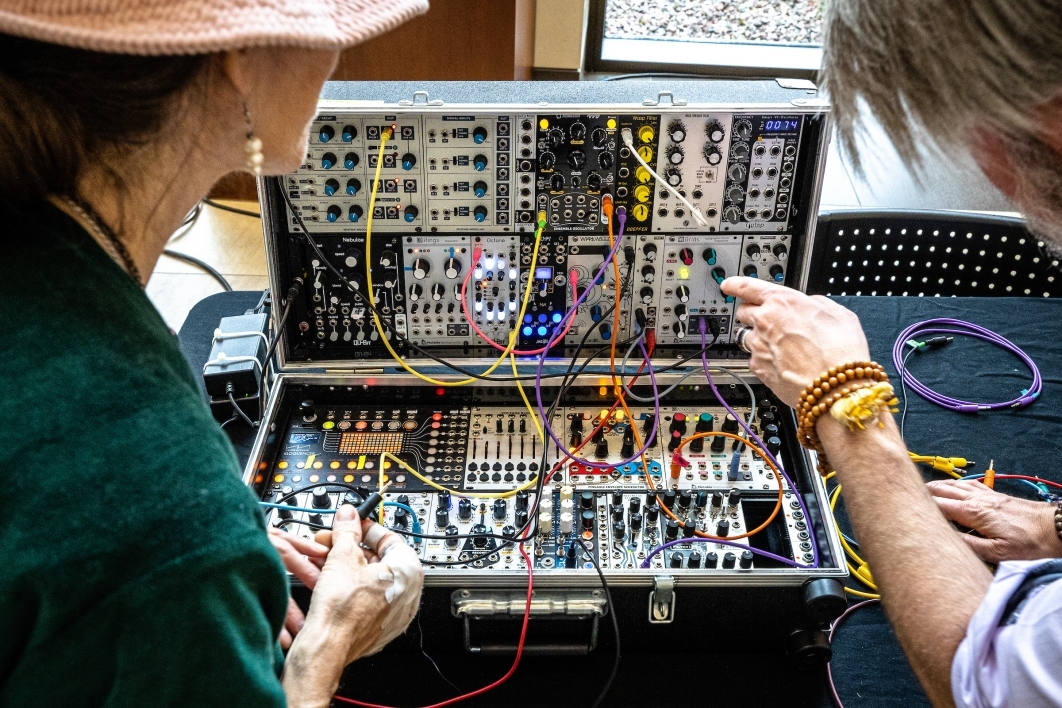 Tony Obr, assistant teaching professor in the School of Music, Dance and Theatre, demonstrates his modular synthesizer to Elizabeth Scriba, of Mesa, Arizona, at the Musical Instrument Museum in Phoenix on Saturday. 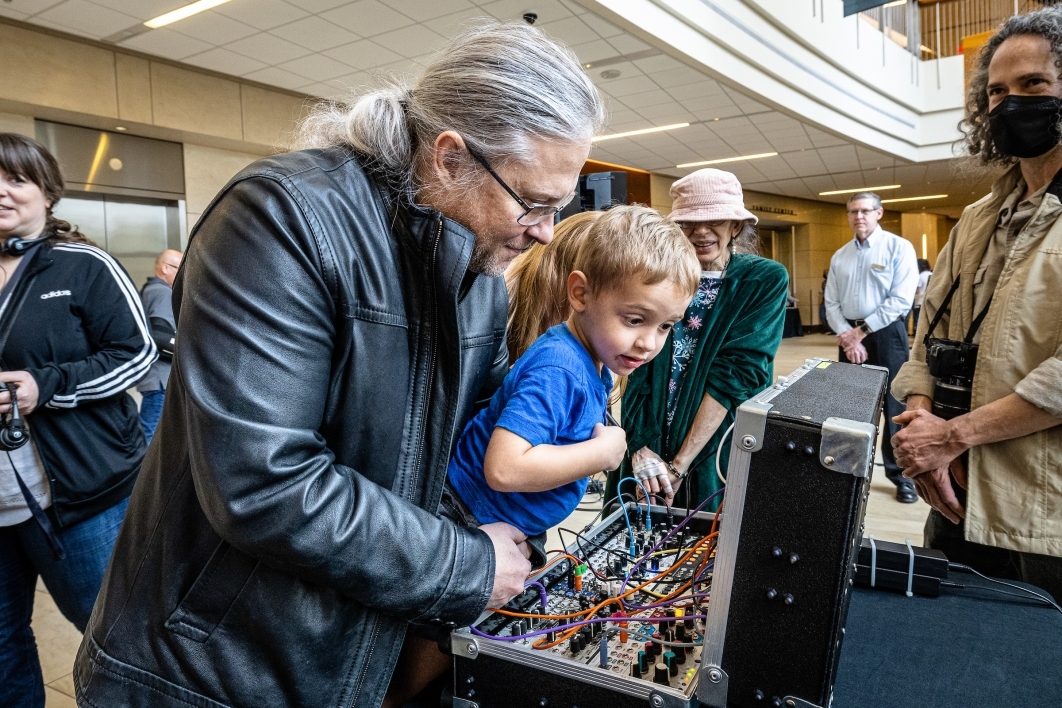 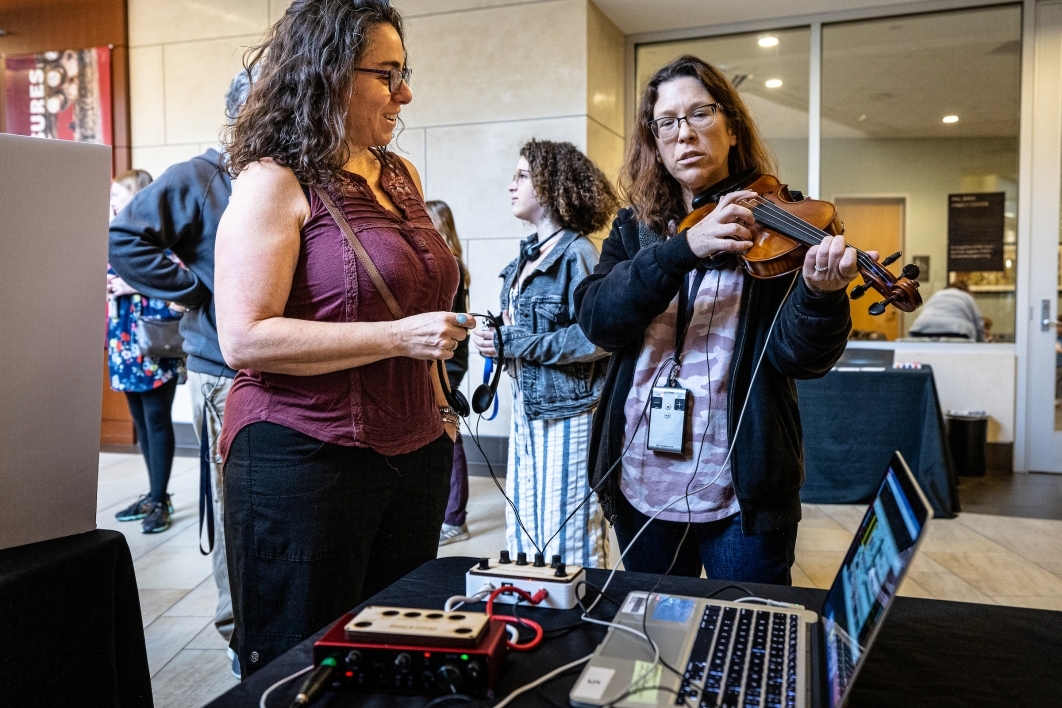 Stephanie Fishman, of Phoenix, feels the haptic feedback from the violin's active shoulder rest, as her sister-in-law Mara Gossack, of Cave Creek, watches at the Musical Instrument Museum in Phoenix. The women were able to try out the invention of Seth Thorn, clinical assistant professor in the School of Arts, Media and Engineering at ASU.

Thorn teaches a class on wearable music that teaches students how to use the sensors, how to work with motion and how to connect them to different synthesis algorithms.

Thorn’s team is working on a three-year projected funded by the National Science Foundation to train teachers to use the sensors with neurodivergent students.

“We have choreographers to come in and show us how to move. We move together and dance and figure it out,” he said.

“It’s trying to get out of this isolated, linear, cognitivist mode of computing we all do and get the body involved.”

Thorn also demonstrated his patented invention, an active shoulder rest for a violin that has a microphone and provides haptic feedback. 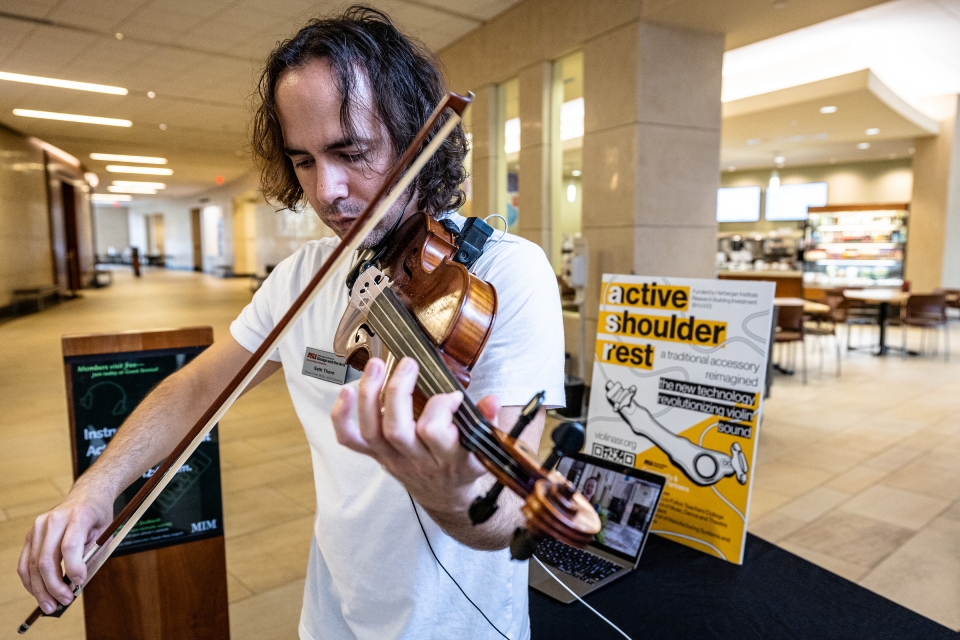 Seth Thorn, clinical assistant professor in the School of Arts, Media and Engineering at ASU, demonstrates his active shoulder rest, which provides haptic feedback to the performer, on Saturday at the Musical Instrument Museum. Photo by Charlie Leight/ASU News

“I did this because my personal violin practice has been a digital exploration of the violin and I wanted to change the sound and reintegrate so I could feel the sound actually coming out of the violin. So this just means you can tinker with the sound of the violin through the microphone. It can have implications for how we teach the violin.

“It’s a haptic metronome. You feel the pulse in the violin, in your fingers and on your shoulder. Everybody loves that,” he said.

Museum guests also were able to participate in a workshop with beat making, sampling and live performance with the AZ Beat Lab, a music-production organization founded by C. Samuel Peña, the assistant director of the popular music program and a clinical assistant professor in the School of Music Dance and Theatre.

In the afternoon, three students in the popular music program in the School of Music, Dance and Theatre performed electronic music. 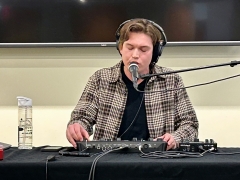 Mark Wetzel combined haunting vocals and beat boxing with a range of sounds he created with a loop station and voice changer. As he sang a vocal, he would record it, then play it back and layer other vocals and sounds over it. >> WATCH CLIP

“I would eventually like to have some sort of show with an hourlong set with some really cool visuals that go along with it, to visually create what you’re hearing,” said Wetzel, who also produces music. 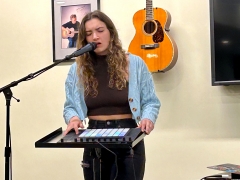 Sophia Bavishi sang a cover of the Portishead song "Sour Times" as well as an original song and created a digital accompaniment with an Ableton Push 2 device, which connects to her laptop. Her live digital set combined some pre-programmed elements with improvisation. >> WATCH CLIP

She was introduced to electronic music by Erin Barra, director of the pop music program and an assistant professor in the School of Music, Dance and Theatre.

“I fell in love with it in a class and started learning more on my own, practicing with it and developing a live set,” she said. 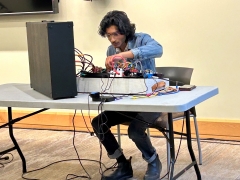 Rohith Shaker performed ambient sounds on a modular synthesizer he learned how to create in a class with Obr. >> WATCH CLIP

“I also write songs, alternative stuff, and I’m trying to find the middle ground between ambient electronic music and alternative music,” he said.

Top photo: School of Music, Dance and Theatre Assistant Teaching Professor Tony Obr demonstrates his modular synthesizer to a room with more than 50 people on Saturday, Jan. 14, at the Musical Instrument Museum in Phoenix. Photo by Charlie Leight/ASU News