For centuries, the darkness of the night sky sparkling with stars and the glow of the moon has been an inspiration and wonderment to scientists, artists, philosophers and the casual observer. Gazing up at the night sky — just how dark is it?

The question was the subject of recent studies by a team of researchers, including Darby Kramer, Tim Carleton, Rosalia O'Brien, Delondrae Carter and Rogier Windhorst at Arizona State University's School of Earth and Space Exploration, with Scott Tompkins at the University of Western Australia, Sarah Caddy at Macquarie University in Australia and the contribution of many other researchers. 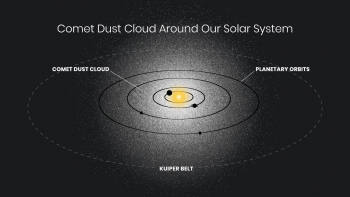 This artist's illustration shows the location and size of a hypothetical cloud of dust surrounding our solar system. Astronomers searched through 200,000 images and made tens of thousands of measurements from Hubble Space Telescope to discover a residual background glow in the sky. Because the glow is so smoothly distributed, the likely source is innumerable comets — free-flying dusty snowballs of ice. They fall in toward the sun from all different directions, spewing out an exhaust of dust as the ices sublimate due to heat from the sun. If real, this would be a newly discovered architectural element of the solar system. Photo courtesy NASA, ESA, Andi James (STScI) Download Full Image

The team's trio of research papers have recently been published in The Astronomical Journal and The Astrophysical Journal Letters.

To find out, astronomers decided to sort through more than 200,000 images from NASA's Hubble Space Telescope and made tens of thousands of measurements on these images to look for any residual background glow in the sky in an ambitious project called SKYSURF. This would be any leftover light after subtracting the glow from planets, stars, galaxies and from dust in the plane of our solar system, called zodiacal light.

When researchers completed this inventory, they found an exceedingly tiny excess of light, equivalent to the steady glow of 10 fireflies spread across the entire sky. That's like turning out all the lights in a shuttered room and still finding an eerie glow coming from the walls, ceiling and floor.

This faint glow — referred to as a “ghost light” — was detected in the SKYSURF analysis, and its source is still uncertain. The researchers say that one possible explanation for this residual glow is that our inner solar system contains a tenuous sphere of dust from comets that are falling into the solar system from all directions, and that the glow is sunlight reflecting off this dust. If real, this dust shell could be a new addition to the known architecture of the solar system.

Kramer, a lead author on one investigation and PhD student studying astrophysics, specifically looked at NASA's Hubble Space Telescope Ultra Deep Field image to see if the team could quantify how galaxies — faint galaxies specifically — could be hiding in that image.

To achieve this, Kramer and her team received the black-and-white deep space images and were able to manipulate the archived layers (the beautiful images the public sees) together to simulate how real galaxies block each other’s light in the real universe. But this requires writing code to handle the images and data; and it can take up to two weeks to get a well-processed image from Hubble. While writing code, Kramer finds it satisfying to overcome the challenge of finding the bug that prevented something from not working.

"It's very relevant to extragalactic background light studies, which is what SKYSURF is focused on. There's a claim that there could be a significant amount of missing faint galaxies that could be causing this discrepancy that we have in the Extragalactic Background Light (EBL) measurements," Kramer said. "I dug into this investigation for my recent paper."

In these studies, the team used a "stacking process" — stacking images on top of each other to better understand what the data is they are looking at — to quantify how many galaxies could be hiding in these deep images.

Carleton, an ASU postdoctoral researcher and a lead author on the papers, and his team analyzed hundreds of thousands of archival images. This team is unique, in that they are interested in something other than the bright, exciting objects in the Hubble image that everyone would expect.

Carleton is more interested in the background aspect of the image, taken out in one of those calibration steps. But because Hubble is above the Earth's atmosphere, that background level can reveal many interesting things; it's a valuable measurement because it constrains those models that help us understand of how bright that background should be.

"This has yet to be tested with this wide variety of data we have. There are a few measurements that look at this background level, but this SKYSURF project uses such an enormous amount of data that are all archived, but no one thought to look at," Carleton said.

Working with Carleton and Windhorst on the Hubble SKYSURF Project, co-author O'Brien, a third-year PhD candidate at ASU, studied images taken with the Hubble Space Telescope, which contains lots of galaxies, lots of stars and maybe even some dust clouds. She says they are looking past or ignoring all those discrete objects that astronomers usually study. Instead, they are studying what we call the sky's surface brightness.

Hubble veteran astronomer Windhorst first got the idea to assemble Hubble data to look for any "ghost light."

"More than 95% of the photons in the images from Hubble's archive come from distances less than 3 billion miles from Earth. Since Hubble's very early days, most Hubble users have discarded these sky-photons, as they are interested in the faint discrete objects in Hubble's images, such as stars and galaxies," Windhorst said. "But these sky-photons contain important information which can be extracted thanks to Hubble's unique ability to measure faint brightness levels to high precision over its three decades of a lifetime."

The Hubble Space Telescope is a project of international cooperation between NASA and the European Space Agency. NASA's Goddard Space Flight Center in Greenbelt, Maryland, manages the telescope. The Space Telescope Science Institute in Baltimore conducts Hubble and Webb science operations. STScI is operated for NASA by the Association of Universities for Research in Astronomy in Washington, D.C.

Written by Ray Villard of the Space Telescope Science Institute with contributions by Kim Baptista of ASU's School of Earth and Space Exploration.

ASU’s Alexandra Navrotsky has been awarded the Czochralski Medal from the European Materials Research Society, their highest honor for lifetime research achievement in materials science.The medal was to be given at the society's meeting in Warsaw, Poland, in 2020, but that meeting was canceled due to COVID-19. It was instead presented at the society's recent meeting in Boston by European Materi...

ASU’s Alexandra Navrotsky has been awarded the Czochralski Medal from the European Materials Research Society, their highest honor for lifetime research achievement in materials science.

The medal was to be given at the society's meeting in Warsaw, Poland, in 2020, but that meeting was canceled due to COVID-19. It was instead presented at the society's recent meeting in Boston by European Materials Research Society President Juan Ramon Morante in a ceremony during a session on modern materials thermodynamics, which was organized by Navrotsky and colleagues. Arizona State University Regents Professor Alexandra Navrotsky, of the School of Molecular Sciences and the School for Engineering of Matter, Transport and Energy in the Ira A. Fulton Schools of Engineering, has been honored with the European Materials Research Society Jan Czochralski Award. Photo by Mary Zhu Download Full Image

The Czochralski Award includes the Czochralski Gold Medal and a commemorative diploma, both of which were presented to Navrotsky.

Professor Jan Czochralski was one of Poland’s most famous scientists. In 1916, after serendipitously dipping a pen into a small crucible of molten aluminum instead of an inkwell, and withdrawing it, he noticed that a thread of aluminum hung from the nib. The thread of aluminum turned out to be a single crystal, and so the Czochralski method for single crystal growth was born. His method is currently used for the growth of single crystals of germanium and silicon, which are the basis of a vast range of modern electronic equipment and devices.

The award is presented every year to a scientist based on their achievements in advanced materials science. Other eminent American awardees include Mildred Dresselhaus, a physics professor emerita from MIT, in 2010, who also received the 2012 Enrico Fermi Award and the U.S. Presidential Medal of Freedom in 2014. Distinguished Harvard Professor George Whitesides also received the award in 2014. 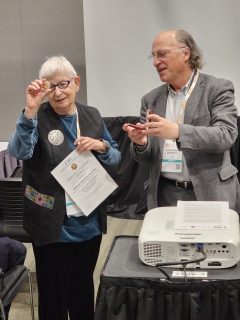 Alexandra Navrotsky is the director of the Navrotsky Eyring Center for Materials of the Universe and a Regents Professor in the School of Molecular Sciences and School for Engineering of Matter, Transport and Energy at Arizona State University. She is also an affiliated faculty member of the School of Earth and Space Exploration.

A member of the National Academy of Sciences, Navrotsky, who began her academic career at ASU in 1969, left in 1985 for Princeton University and officially returned on Oct. 1, 2019, to head the new one-of-a-kind Center for Materials of the Universe.

“Professor Navrotsky and her group are world leaders in many areas of solid state science, from microscopic features of structure and bonding to macroscopic thermodynamic behavior in minerals, ceramics and other complex materials,” said Professor Tijana Rajh, director of the School of Molecular Sciences. “I am very happy to see her recognized with this prestigious and well-deserved award.”

“Receiving the E-MRS Jan Czochralski Award was an utter surprise and is a great honor,” Navrotsky said. “Czochralski was a pioneer in chemical engineering; Poland has a great tradition in catalysis and materials science.”

By advancing high- and low-temperature reaction calorimetry as a foundational research tool, Navrotsky has contributed to a broad spectrum of applications, from mineral thermodynamics to ceramic processing to zeolites.

Navrotsky has published more than 900 scientific papers and received many honors, including the Harry Hess Medal, the Goldschmidt Medal and the Kingery Award. She serves on numerous advisory committees and panels in government and academia, promoting collaborative research across disciplines and institutions.

“In science, as in life, every day is a new adventure!” Navrotsky said.