Arizona State University graduate student Judah Waxelbaum is a long way past that anxious time before his freshman year as an undergrad, but he still credits much of his academic success since to the School of Politics and Global Studies’ Early Start Program he participated in then.

“Even now, while getting my master’s of public policy, I owe so much to Early Start,” Waxelbaum said. 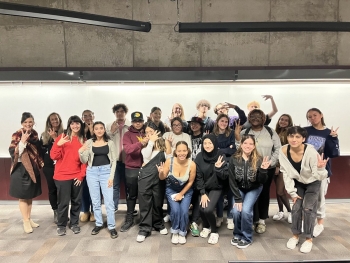 “Students not only get credits before starting their first semester, but make connections that will give them a massive edge over their peers. I would recommend Early Start to any student looking to not only hit the ground running but succeed in college.”

The program, this year led by Gina Woodall, teaching professor, and Kristin Cochran, political science PhD candidate, emphasizes personal success to students, who participate in a two-week immersive program designed to jump-start their academic journeys ahead of their first year at ASU.

“It’s about two things,” Woodall said. “The first is preparing them and making sure they are up to par academically and getting them some experience in the changing level of academics from high school to college.

“The second is to get them really comfortable and acclimated to a collegiate environment.”

Students achieve that through participation in thought-provoking activities, making connections with professors and learning about pathways for their desired endeavors.

This fall, that included a tour of the Arizona Capitol and the Maricopa County Tabulation and Election Center. Students also had the opportunity to meet with various alumni and professionals who could offer guidance as they start college, such as former Early Starter Waxelbaum. He encouraged them to work hard, build and maintain relationships and be friendly with those who have opposing political views.

Current freshman David Montes said that, while he was initially intimidated by the Early Start Program, it turned out to be an enriching experience for him.

“My biggest takeaway from the Early Start Program was the concept of grit,” Montes said. “I was so afraid of failing college, but having professors teach you that it’s more vital to keep trying than giving up definitely helped my journey as a Sun Devil.”

While the program is designed for first-year students, the benefits and networking from the experience lasts well beyond two weeks.

“Ninety-nine percent of the people who have gone through this program would say it was absolutely worth it because the connections really do last a lifetime,” Woodall said.

Other students who have gone through the program claim that it gave them the resources they needed for support.

“I chose my Early Start professor, Dr. Woodall, to be my thesis director for my senior thesis, because we are both familiar with each other,” current junior and former Early Starter Analeigh Lerma said. “It's going to be a blast working together.”

Editor’s note: This story is part of a series of profiles of notable fall 2022 graduates.The chance to continue her soccer career brought Eva Van Deursen to Arizona State University, but it was a conversation with an orthopedic surgeon that helped her decide on a career path once her playing days are done.Van Deursen is graduating from the College of Health Solutions with a Master of Science i...

The chance to continue her soccer career brought Eva Van Deursen to Arizona State University, but it was a conversation with an orthopedic surgeon that helped her decide on a career path once her playing days are done. 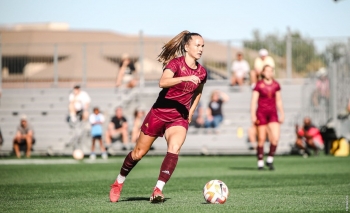 Van Deursen is graduating from the College of Health Solutions with a Master of Science in clinical exercise physiology. Her immediate plans will take her to Germany, where she will continue to play soccer, but ultimately she’ll put her education to use helping others achieve their goals.

“My plans would be to work as an exercise physiologist with a professional soccer team and improve the performances of the athletes using data like heart rate and fatigue indexes,” Van Deursen said.

Playing professionally in Europe will be something of a homecoming for Van Deursen; she came to ASU from Veldhoven, Netherlands.

Answer: I talked to an orthopedic surgeon and he told me that so many diseases can be prevented by a healthy lifestyle and little adjustments to your daily life that can improve the quality of life. I wanted to learn more about this and how I could help people to live their best lives possible without giving them a cocktail of all kinds of medicine, but rather increasing physical activity and creating healthy eating habits.

A: I learned that being patient in this field is essential to achieve optimal results. You can not assume that the patient has the same knowledge/understanding about their lifestyle as you do as an exercise physiologist.

A: I chose ASU because of the amazing coaching staff in the ASU women's soccer team, and for being able to play (NCAA division I) soccer in the Pac-12 and get my degree was a very easy choice for me. The weather was also a small factor because it is very cold back home!

A: Dr. Donna Cataldo taught me very important lessons, lessons inside the field of exercise physiology but also outside of the classroom. She taught me that we can make everything work as long as we are flexible and willing to put in the work together.

A: I would say create a good relationship with your professors and make sure your communication with them is always on time and clear.

Q: Hayden Library was one of my favorite spots as well as the outside area close to the Memorial Union.

A: I would create a solution for the poor water quality on the planet and barely any water in some places. The goal would be access to clean water for everyone.