Wyatt Myskow found his love for writing and reporting in high school after he was appointed editor-in-chief of his school newspaper in Apple Valley, California. That moment pushed him to pursue journalism as a college major and potential career. 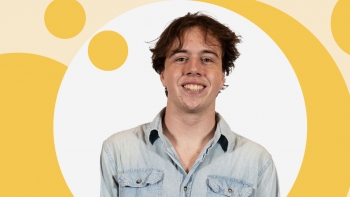 Since then, he’s built an extensive portfolio while breaking some major stories as a student journalist.

Myskow is set to graduate from ASU’s Walter Cronkite School of Journalism and Mass Communication in December with his Bachelor of Arts degree in journalism and mass communication, and a minor in history.

He was named an Outstanding Undergraduate Student for the fall 2022 convocation.

Myskow has worked as a reporter and in leadership roles at the State Press, reported on local politics as an intern at the Arizona Republic and wrote for the Chronicle of Higher Education.

“I’ve gotten to write pretty big stories over the years here at ASU for the State Press and I’m grateful for that,” Myskow said. “When I look back I’m like, 'Wow, I did do some crazy things.’”

In 2021, he and two other students won a first place award for student investigative reporting from the Arizona Press Club.

“I feel ready to enter the next step of my career, and it’s thanks to all the opportunities within Cronkite like the professional programs, the internships, the State Press, all of that,” Myskow said.

Question: What was your “aha” moment when you realized you wanted to study the journalism field?

Answer: The end of my sophomore year in high school, I was in the student newspaper and all the editors were graduating and I was going to be the opinion editor the next year. They were like, "Wyatt, after that you get to become the editor-in-chief and guide the paper." That was like the pushing factor of me being like, maybe I should just stick in journalism since I’m going to do this for a couple more years. Maybe I can make a career out of it and I should do it in college.

A: Just being a reporter, every day you get to learn so much when you’re doing the job of it. I’ve just been able to learn so much about people. I guess the thing that I’ve learned from being at Cronkite, working at the State Press and the Arizona Republic internship is just how much people are willing to share with you as a reporter sometimes. As long as you just show up and ask questions and show genuine interest in people, they’re willing to share so much with you and help you tell their stories. That’s kind of been something that always blows me away, is how much people are willing to do that for you.

I didn’t realize that until I started doing reporting here. I think it’s opened my eyes to just how impactful our work can be and how much people are willing to help us do it as long as you put in the effort as a journalist.

A: I chose ASU because it’s a really good journalism school. The Cronkite School is really well-known and I’m from California. I’m an out-of-state student and there’s not really a California university that was as good as Cronkite. Any of the ones that were even comparable would cost just as much based on the scholarship I got at ASU. So for me it’s near-ish home, I can drive back on the weekends and see my family, but also it’s the better school and it costs about the same. Why not just go to the better school? That’s why I chose ASU.

Q: Which professor gave you the most memorable advice for the future?

A: I think it would be Celeste Sepessy. Celeste was easily the best professor I had at ASU. I took a community engagement reporting class with her and she really taught us how important it is to think about journalism in a way that’s different from other classes – how to really center the community that you’re covering in your reporting to reflect the concerns and problems they have.

Learning how to do that kind of stuff from her, also just being an amazing professor and an incredibly kind human being definitely changed how I think about journalism going forward. That’s something I’ll definitely take with me.

A: Do your best to get real opportunities and experiences while at Cronkite. I think, for me the best thing I did was joining the State Press because it let me do actual reporting and develop the skills of writing and developing sources, figuring out what my beat is and how to report on that beat, which led me to internship opportunities at the Arizona Republic and the Chronicle of Higher Education. It’s one of those things where I just think joining or doing something that actually lets you do the thing you want to do, it doesn’t have to be State Press, it could be Blaze (ASU's student radio station) or it could be an internship at a PR firm or whatever it might be. Whatever your niche is, try and get actual experience with it outside of the classroom, too. Take classes that kind of round out your skill sets. That balance can help out what you want to do and for me that’s to be a writer and reporter. Taking the opportunities that can help me get there will also take classes that round out those skills would be my best advice for people still in school.

A: My favorite spot, you can’t even get there anymore, but it was on the Tempe campus. It’s the Matthews Center basement where the old State Press newsroom was. It’s still there. It’s just empty and the door is locked because it was unsafe or something so they gave us a different newsroom. But I really love that place because it was just so uniquely ours as a newsroom. It was kind of gross and very much reflected what a student newsroom should look like, but it just felt like home and it had this cool couch, lights, random posters. We had been in there for decades. There were just random things all over the place and every little piece has a story, or you didn’t know what the story was. How did this random thing like the poster of Richard Nixon get on the wall? Where did that come from? Why is there a picture of Nixon? No one knows, but we have it, and it’s kind of funny. So I just really enjoyed being there. And also whenever we were there, we were all there as friends working on stories or doing edits and just hanging out. It was always a really good time. The other newsrooms are good too but that one was really special because that basement was just ours. It just had a lot of character.

A: I can’t share what exactly my next steps are but I have accepted a position and will be starting in a new newsroom in January.

A: It would be climate change, probably. I feel like $40 million is probably not enough to really solve any problem fully, but it would probably help some researcher somewhere. And that is better spent on that topic than anything else because it’s pretty bad. The more resources we can throw at it might be better than not throwing them at it. That would be the thing for me.