While people around the world have their eyes glued to the screen to watch the World Cup, Arizona State University's Sports Business program and Global Education Office have proudly announced a new partnership with the Real Madrid Graduate School at the Universidad Europea in Spain. This partnership pairs one of the world’s most recognizable sports brands, Real Madrid CF, with America’s most globally engaged university.

Students interested in sports business can spend the summer or the full spring semester learning the industry at the Real Madrid Graduate School. Both options offer internship opportunities for students to gain experience in the sport business world with an international lens. 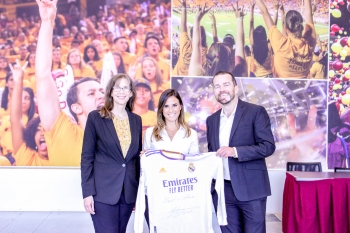 Beyond their regular coursework, students will also participate in the exclusive White Week event. This annual event is only available for students of the Real Madrid Graduate School. Highly prestigious executives from the sports business industry will offer master classes about their daily operations in marketing, digital transformation, venue management, the Real Madrid Foundation, operations, brand activation and partnerships. During this week, students will also visit Real Madrid CF’s facilities and other important sporting venues in Madrid, Spain, where they will be able to learn from different business models.

Emilio Butragueño, general manager at the Real Madrid Graduate School and director of institutional relations at Real Madrid CF, stressed the importance of this agreement. “We are very pleased to establish a partnership with such a prestigious university,” Butragueño said. “With this collaboration with Arizona State University, we seek to offer a different, unique and impactful international educational experience that combines classes in Phoenix and Madrid by highly renowned professionals from the sports industry.”

Students interested in participating in this exciting new program can learn more and apply here.

Editor’s note: This story is part of a series of profiles of notable fall 2022 graduates.Shreeshiv Patel says a big catalyst for his career aspirations came from the words of Steve Jobs, the late entrepreneur and co-founder of Apple and Pixar.“Everything around you that you call life was made up by people that were no smarter than you,” Patel recalls Jobs saying. “And you can change it, ...

Shreeshiv Patel says a big catalyst for his career aspirations came from the words of Steve Jobs, the late entrepreneur and co-founder of Apple and Pixar. 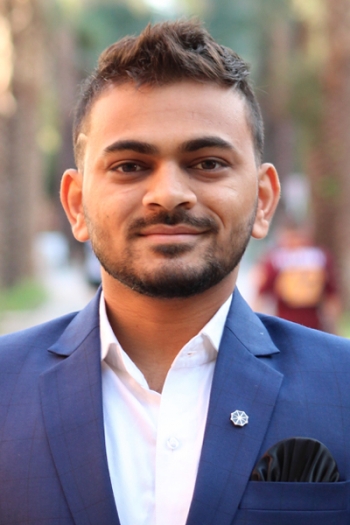 Along with a master's degree in computer science, Shreeshiv Patel earned an Impact Award for his contributions to the student community in ASU's Ira A. Fulton Schools of Engineering. He aspires to apply what he has learned in his graduate studies to his pursuit of a career as an entrepreneur. Photo courtesy of Shreeshiv Patel Download Full Image

“Everything around you that you call life was made up by people that were no smarter than you,” Patel recalls Jobs saying. “And you can change it, you can influence it, you can build your own things that other people can use.”

Patel says his decision to study at Arizona State University was motivated by the emphasis on innovation and entrepreneurship in many of the university’s degree programs.

“At ASU, I have had the opportunity to meet more people and to maximize my potential,” Patel says. “Choosing ASU is one of the best decisions that I have made.”

He says the skills he has learned in earning a master's degree in computer science will enable him to develop and build technology that can have broad and meaningful impacts.

“I remember when I wrote my first line of code and developed a quiz application during my freshman year,” Patel says. “It was the first moment when I realized we can also develop software that others can use.”

“Within a few months of starting the club, we became a community of more than 200 members, and we are still growing,” he says. “I got the opportunity to expand my network and mentor undergraduate students.”

After graduation, Patel plans to move to the high-tech mecca of Silicon Valley in California and begin work to launch entrepreneurial ventures. He is building a platform called OnlyReferrals that connects job seekers with employees at companies looking to hire.

“I want to turn this platform into a product that is ready for the market,” Patel says. “My long-term career aspiration is to start my own venture capital funds. I believe this will enable me to partner with many startups that will bring good changes to the world.”