Interested in a career in academia following graduation but don't know where to start? That dilemma is common for many, especially those who are historically underserved.

This year, Salvador Hector Ochoa, provost of San Diego State University, will visit Arizona State University as the Graduate College Distinguished Lecture keynote speaker on Friday, Dec. 2, and will discuss ways that students can prepare for a job in an academic setting and how universities and educators can help underrepresented students attain a graduate degree to succeed in academia in his lecture, “Promoting Success from Undergraduate to Graduate Studies to a Career in Higher Education." Each year, the Graduate College Distinguished Lecture series brings a leading scholar to engage the ASU community in a discussion about the advancement of graduate education as a public good. Speakers examine how to attract, nurture and inspire future generations of advanced learners who will foster opportunity and well-being in their communities.

Ochoa's research focuses on bilingual psychoeducational assessment and educational programming issues of Latino students, issues which he has offered input on at the state and national levels.

Following his lecture, Ochoa will converse with special guest Lisa Magaña, provost fellow for ASU's Hispanic-serving initiatives and associate dean of diversity, equity and inclusion in The College of Liberal Arts and Sciences. They will examine how universities can advance graduate education to increase the number of professors from diverse backgrounds, and answer questions from the audience.

This event is in person with an option to view it live, virtually. Registration is required for both event formats. Submit your questions with your registration. Register here.

What will we be eating in the year 2075? Which of our favorite foods will be off the table? And what can be done to replace concerns about scarcity with the security of emerging resources and solutions?  These questions and more were explored at Arizona State University’s Emerge 2022: Eating at the Edges — A Festival of Food Futures held Nov. 19 at ASU at Mesa City Center and the Mesa Arts ... 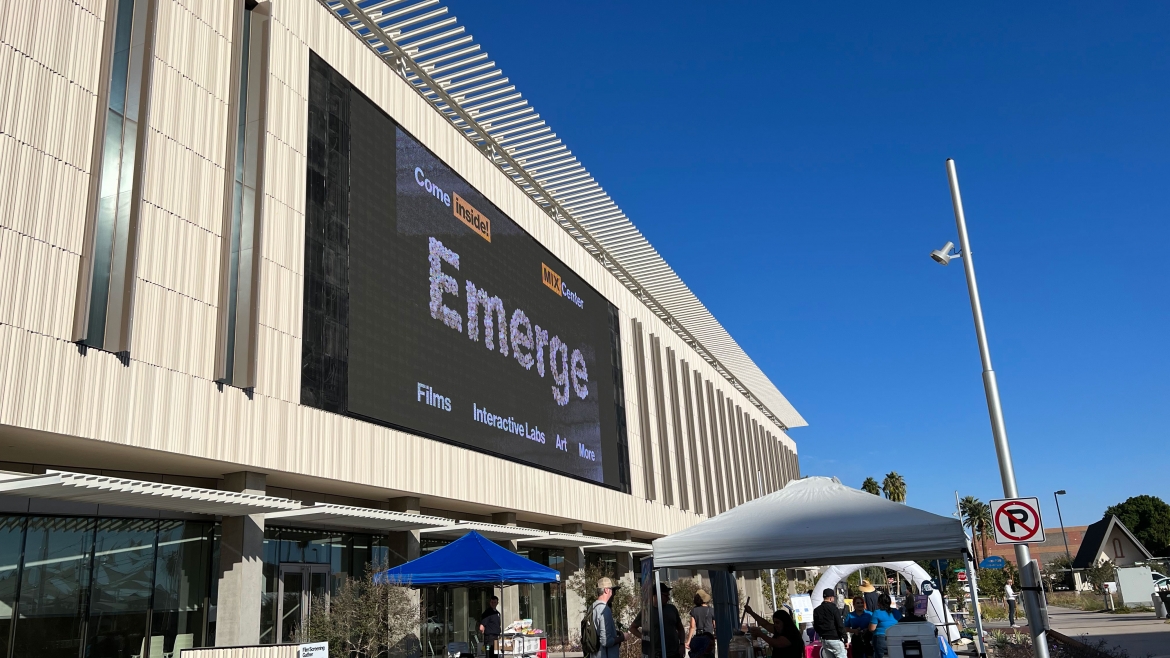 What will we be eating in the year 2075? Which of our favorite foods will be off the table? And what can be done to replace concerns about scarcity with the security of emerging resources and solutions?

These questions and more were explored at Arizona State University’s Emerge 2022: Eating at the Edges — A Festival of Food Futures held Nov. 19 at ASU at Mesa City Center and the Mesa Arts Center.

Live music served as a backdrop for research exhibits, art and interactive activities designed to give the public food for thought.

“The vision for Emerge has been to provide the public with imaginative ways to engage with the future and tools to better equip them for thinking about what futures they would like to see come into being,” said Assistant Professor Christy Spackman, director of Emerge 2022.

The ASU food scholar said this year’s focus on food was fitting.

“Given the current conversations about climate change, weather and security,” Spackman said, “it is the right time to talk about food.”

The free, daylong festival was presented by ASU in partnership with the Mesa Arts Center and Leonardo: The International Society for Arts, Sciences and Technology, and showcased many interdisciplinary projects. In total, there were 36 exhibits on display, and the event attracted nearly 1,000 attendees.

The event offered a variety of experiences, including many that engaged the senses, such as: “Something in the Air,” a walk through the festival where participants took in the surrounding smells; “Tasting History: Frybread, Culture and National Identity” and a show called “Improv Comedy and Food Futures.”

“There is a new world emerging,” said Diana Ayton-Shenker, executive director of Leonardo, “and the festival is a taste of how we might experience that.” 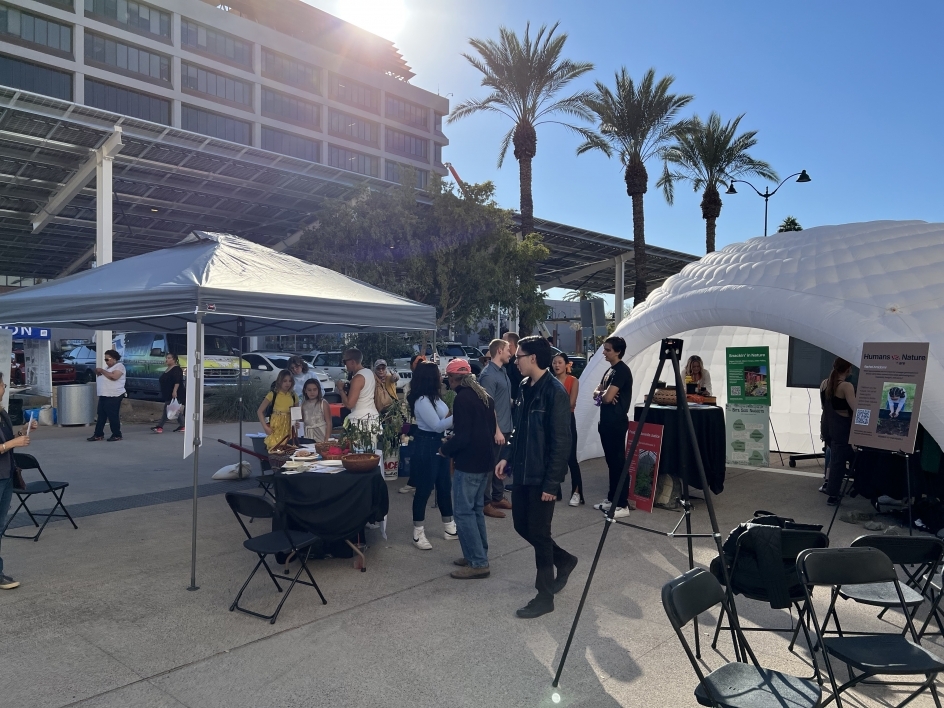 Event attendees interact with some of the displays at Emerge 2022. 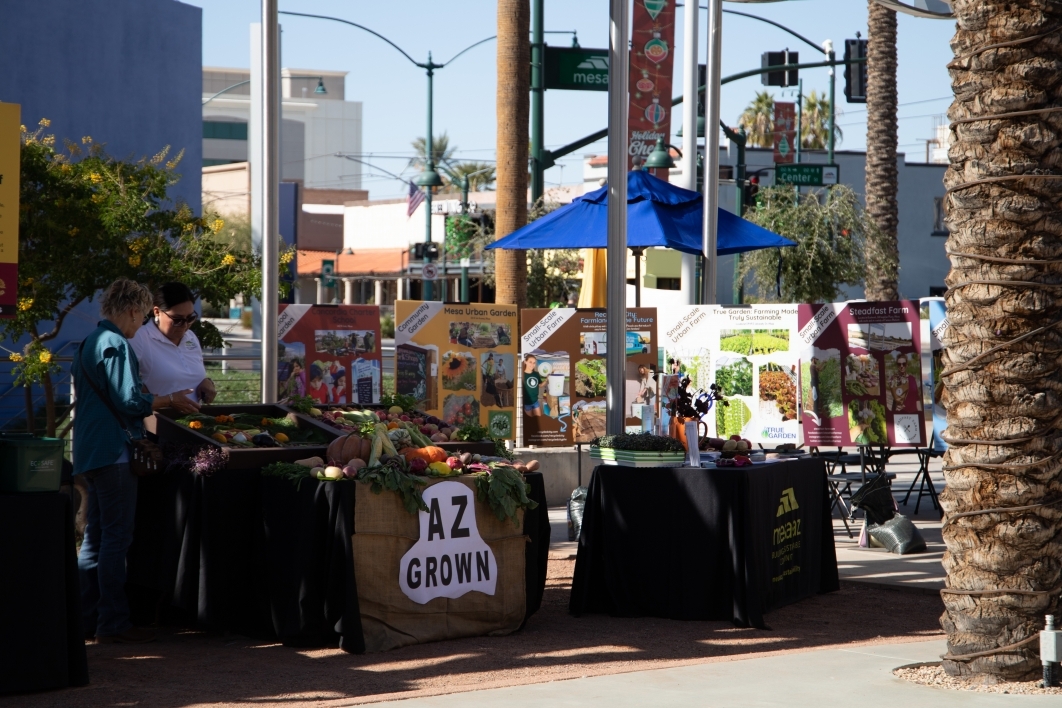 A colorful array of produce was displayed at the AZ Grown table the Emerge festival. A young Emerge attendee checks her watch while standing next to a table of building materials. A robotic sketching machine creates its interpretation of the surrounding environment. Emerge attendees check out an exhibit called "Thousand Handshakes," which explores the connections between fungi and mutual cooperation, in the lobby of the MIX Center. 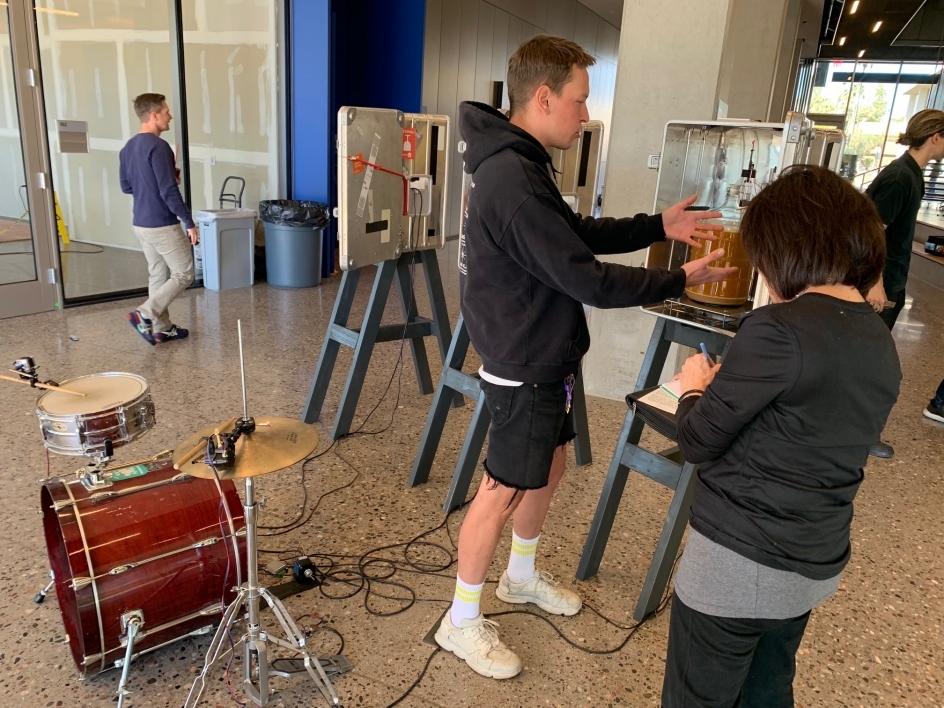 An artist explains the "Blobs Per Minute" display where the fermentation from beer generates sound from a connected drum set. Beyond the fun of the festival there were also research projects on display.

At Cafe 2057, in a room with a futuristic dome, visitors explored ideas about restaurant menus and how foods may be secured, served and paid for in 35 years.

The research was led by Chris Wharton, associate professor of nutrition in the College of Health Solutions, with support from the ASU-Starbucks Center for the Future of People and the Planet.

Miriam Wheeler, an attendee who participated in Wharton’s display, exited the cafe with “a range of emotions.”

“It is a good thought experiment,” she said. “In some ways, it was scary to think about the loss of foods that have come to be so comforting and the idea of everything being automated.

“But I am hopeful because we are talking about it.”

“The Future Taste of Water: What Will Our Water Taste Like in the Future?” exhibit gave attendees the opportunity to truly test the waters.

The interactive booth began with Joe B. Austin, an undergraduate student at the ASU School of Arts, Media and Engineering, prompting people to explore their thoughts about reclaimed (sewage) wastewater for cleaning, bathing and, last of all — drinking.

Attendees had the opportunity to taste reclaimed water alongside several other sourced water samples, and some said they tasted no discernable difference. One observer even liked the reclaimed water but admitted, “I wish they hadn’t told me what it was.”

“We are looking at the fermentation process through the dual lenses of arts and sciences,” said Natalia Kolodzei, curator of the CYLAND Media Art Lab, which co-presented the exhibition.

In one piece titled “BPM — Blobs Per Minute,” beer bubbled up in a fermentation system that connected to a drum set, generating sound in the snare, cymbal and bass drum, in the lobby of ASU’S Media and Immersive eXperience (MIX) Center.

Just outside of the MIX Center, attendees learned to grow edible food in “Humanities Lab: Food Justice for the Youth by the Youth” display.

A nearby booth called “Indoor Farming” featured romaine, bok choy, basil and more growing in a vertical garden with multi-colored LED lights regulating the plants’ shape, architecture, flavor and nutrition. The researcher, Yujin Park, assistant professor in the College of Integrative Sciences and Arts, demonstrated how vertical farming can save 90% of the water used in conventional farming and yield 10 times the crop.

“I think this is the future of Arizona’s food security,” festival-goer Ed Ranger said. “It should be the No. 1 one priority for the state of Arizona.”