The PRISMS 2022 annual festival for experimental music features new compositions and music that is rarely performed, along with pre-concert talks, roundtables and film screenings. 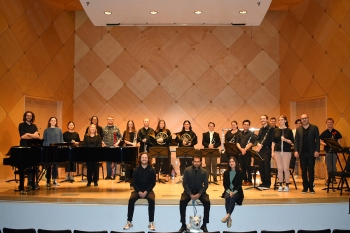 “The PRISMS festival has always provided opportunities for students to perform, but this year we also sent out an internal call for proposals to our composition students to receive commissions,” said Gabriel Bolaños, assistant professor in ASU's School of Music, Dance and Theatre and co-coordinator of the festival.

“The commissions provided the students an opportunity to create new compositions and work with an ensemble and conductor to have the work performed at the festival,” said Simone Mancuso, faculty associate in the School of Music, Dance and Theatre and co-coordinator of the festival.

The students had only 30 days to compose their pieces. Due to the short timeline for composing and putting the piece together, Mancuso said, some of the works have a more open structure and are more improvisational.

“The goal is to have the students explore new things,” Mancuso said.

The student compositions range from a graphic notation work to a textural work that includes speech and a work for amplified saxophone quartet.

The second concert features a new commission by Haitian-born composer Hendel Almétus, assistant professor of practice at the University of the Pacific. Almétus’ piece, “Luminous,” is scored for a saxophone quartet and based on a collection of paintings by visual artist Alan Klinger. Considered somewhat of an underground artist, Klinger is someone whose paintings are not easily viewable to the public. Almétus and Klinger will give a pre-concert talk to discuss the new work inspired by Klinger’s art. Almétus’ sax quartet is paired with graduate student composer Orea Dominguez’s new saxophone quartet, which explores amplification and resonance of the saxophone quartet.

The third and fourth concerts feature five world premieres of electronic music composed for performances in the School of Arts, Media and Engineering’s Ambisonic Dome. Three commissioned works are by renowned composers Elainie Lillios, Tito Rivas and Sarah Belle Reid, and two works are by ASU faculty composers Garth Paine and Bolaños. The guest composer commissions are made possible by a Herberger Institute research and development grant Bolaños received, with additional support from the School of Arts, Media and Engineering and the School of Music, Dance and Theatre. Due to limited audience space in the dome, the concert program will be repeated on Dec. 2 and 3.

Bolaños said most of the guest artists and composers will attend the festival concerts in person.

PRISMS was founded in 2009 by Mancuso and Glenn Hackbarth.

Sun Devil Football returns home for the final time this season, preparing to celebrate both Homecoming and Senior Day as it hosts #23 Oregon State on Saturday, Nov. 19 at Sun Devil Stadium in Tempe. ... Sun Devil Football returns home for the final time this season, preparing to celebrate both Homecoming and Senior Day as it hosts #23 Oregon State on Saturday, Nov. 19 at Sun Devil Stadium in Tempe.