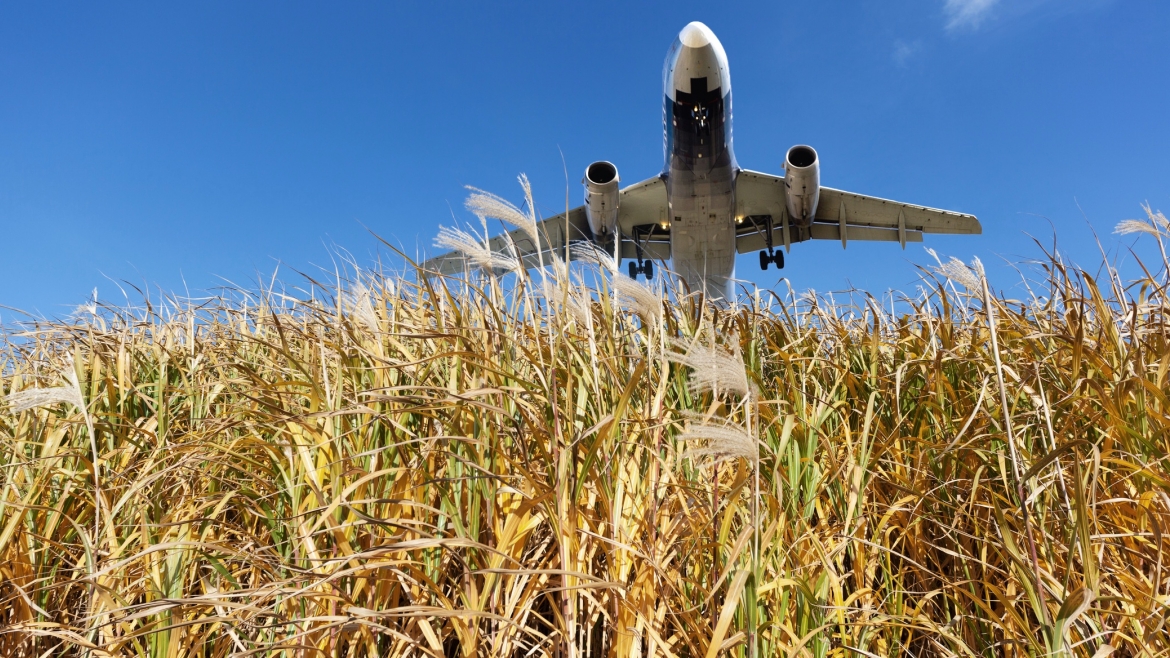 Every day, 45,000 planes fly across the United States, carrying some 1.7 million passengers. Aviation dominates a frequent traveler’s individual contribution to climate change, and yet it is one of the most challenging sectors to decarbonize.

But what if we could make all U.S. air travel nearly emissions free? What if we could replace carbon-intensive jet fossil fuels with a cleaner alternative: biojet fuels derived from rain-fed grass grown in the U.S.?

The study, led by a team of Arizona State University researchers, found that planting the grass miscanthus on 23.2 million hectares of existing marginal agricultural lands — land that often lies fallow or is poor in soil quality — across the United States would provide enough biomass feedstock to meet the liquid fuel demands of the U.S. aviation sector fully from biofuels, an amount expected to reach 30 billion gallons per year by 2040.

“We demonstrate that it is within reach for the United States to decarbonize the fuel used by commercial aviation, without having to wait for electrification of aircraft propulsion,” said Nazli Uludere Aragon, co-corresponding author on the study and a recent ASU geography PhD graduate.

“If we are serious about getting to net-zero greenhouse gas emissions, we need to deal with emissions from air travel, which are expected to grow under a business-as-usual scenario. Finding alternative, more sustainable liquid fuel sources for aviation is key to this.” 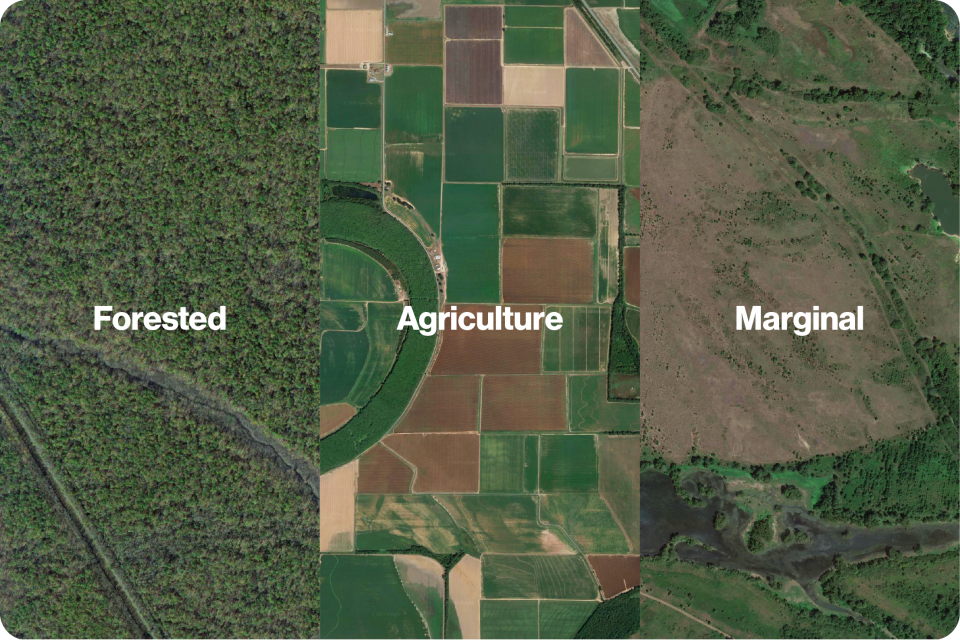 The study found that planting the grass miscanthus on 23.2 million hectares of existing marginal agricultural lands — land that often lies fallow or is poor in soil quality — across the United States would provide enough biomass feedstock to meet the liquid fuel demands of the U.S. aviation sector fully from biofuels, an amount expected to reach 30 billion gallons per year by 2040. Graphic created by Alex Davis/ASU

In the study, the researchers used an integrated framework of land assessments, hydro-climate modeling, ecosystem modeling and economic modeling to assess where and under what conditions across the United States energy crops used for biojet fuels could be grown sustainably using criteria that evaluate both environmental and economic performance.

The criteria were extensive. The team first identified and assessed where optimal marginal agriculture lands already existed in the U.S. They then assessed whether one could grow the right energy crops on the land without using additional water.

The team then analyzed whether growing energy-crop feedstocks on these lands would have detrimental effects on the surrounding climate or soil moisture and predicted the potential productivity of yields of two different grasses — miscanthus and switchgrass — as suitable biomass-energy feedstocks. Finally, the team quantified the amount and the cost of biojet fuel that would be produced and distributed nationwide at scale.

“The current way we produce sustainable jet fuel is very land-inefficient and not on a large scale,” said Nathan Parker, an author on the study and an assistant professor in the School of Sustainability. “There are very limited ways that aviation could become low carbon emitting with a correspondingly low climate impact, and this is one way we've shown that is feasible and can get the aviation industry to be carbon neutral through agriculture.”

The scientists emphasized that this integrated systems perspective was critical to the study. In the past, research around the potential of biofuels has largely consisted of isolated assessments that have not been well integrated, for example, overlooking key data on how altering the crop cover influences the surrounding climate.

“When you plant crops over strategically designed areas, the planting of these crops has an impact on the climate,” said Matei Georgescu, co-corresponding author of the study and associate professor in the School of Geographical Sciences and Urban Planning and director of the Urban Climate Research Center at ASU. “If there is a change in the underlying landscape, for example an increase or decrease in the amount of vegetation, there may be implications for local- to regional-scale climate, including more or less precipitation, or warmer or cooler temperatures.”

To account for these land-atmosphere interactions, the research team took outputs from their hydroclimate model to inform their ecosystem model. The team then evaluated the economic feasibility for farmers to grow these grasses.

For any uptake of an alternative-energy pathway, solutions need to make economic sense.

The researchers, in their analysis, benchmarked the financial returns of the existing uses for the lands they identified — some already are used for growing corn, soy or various other crops, and others are being used as pasture — against those from cultivating either miscanthus or switchgrass as biomass feedstock.

Growing miscanthus or switchgrass needed to be more profitable to replace the existing use of the land in each area.

“These lands we identified are owned and operated by real people for different agricultural uses,” said Uludere Aragon, who is now a postdoctoral fellow at the Environmental Defense Fund. “The cost-effective biofuel potential from biomass feedstocks is influenced largely by the opportunity cost of alternative land uses.”

In the end, researchers found miscanthus to be the more promising feedstock and that biojet fuels derived from miscanthus can meet the 30 billion gallons/year target at an average cost of $4.10/gallon.

While this is higher than the average price for conventional jet fuel — typically about $2 per gallon — the team concluded it is reasonable when considering biojet’s potential to cut emissions. Notably, in 2022 jet fuel prices have varied from $2 to $5 per gallon (not to be confused with retail gasoline) due to changes in supply and demand, showing that prices above $4 per gallon are well within the range of possibility.

A template for the future

The researchers say that in finding further solutions to Earth's climate crisis, it is important that the scientific community bridges disciplines and moves past incremental reductions in emissions. Rather, the researchers emphasize the importance of realistic solutions that scale.

“This was an interdisciplinary team with expertise from ecosystems sciences, climate modeling and atmospheric sciences and economics,” said Georgescu, who acknowledged this research was a culmination of eight years of modeling work and collaboration. “To truly address sustainability concerns, you need the expert skills of a spectrum of domains.

“As academics, we should remember economics drives people’s decisions on the ground. It is vitally important to find the circumstances when these decisions are also aligned with desirable environmental outcomes.”

While stationed in Afghanistan, Steven Ramirez was introduced to a diplomat. Though their meeting was brief, Ramirez was inspired by their role with foreign countries and how passionate they were about helping others. “It was there that I decided one day I would want to be in that very position,” Ramirez said.Later, after a near-death experience while serving, Ramirez returned home and began f...

While stationed in Afghanistan, Steven Ramirez was introduced to a diplomat. Though their meeting was brief, Ramirez was inspired by their role with foreign countries and how passionate they were about helping others.

“It was there that I decided one day I would want to be in that very position,” Ramirez said. 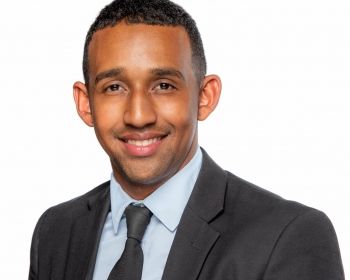 Later, after a near-death experience while serving, Ramirez returned home and began further reevaluating his life goals. He looked into Arizona State University’s veteran program and was inspired to tour the Tempe campus and the Pat Tillman Veterans Center.

“When I came into the center, they embraced me as one of their own, and the next thing I knew, I was enrolled into ASU,” Ramirez said.

Now, he's wrapping up his senior year as a political sicence major and getting ready to graduate in December. As he reflects back on the first political science course he enrolled in through the School of Politics and Global Studies, taught by Gina Woodall, a teaching professor at ASU, Ramirez remembers feeling culture shock as a result of immersing himself back into school after deployment and five years off of education.

Woodall helped Ramirez ease the tension that he felt as she taught him to connect what he learned in the classroom to the real world.

“Besides having an admiration for her fighting spirit, Dr. Woodall always made you feel heard and would respectfully listen to the opinions of all students regardless of what their beliefs were,” Ramirez said.

Thanks to Woodall’s mentorship, Ramirez feels confident bringing his knowledge of political science to his future military career.

After graduation, Ramirez plans on commissioning as an officer in the Marine Corps and hopes to study for his master's degree under the guidance of the Thomas Pickering Fellowship, if selected.

Just like the diplomat did, Ramirez advises fellow students to share their story as it could change the path of one’s life.

“Your story has the ability of impacting, motivating, inspiring and saving others,” Ramirez said.

Answer: Thanks to the Pat Tillman Veterans Center, I have recently found a sweet spot to study that is located in the Sun Devil Stadium. It is the new Pat Tillman Veterans Center (Suite 500). I learned of this space while attending a mindfulness class (Koru Mindfulness) that was led by Dawn Augusta. Her class on mindfulness combined with space that was provided by the veterans center have been integral to my mental health.

Q:  What's the best piece of advice you'd give to those still in school?

A: To all those in school, the best piece of advice that I have to give is the same advice that I give to my junior Marines: Always volunteer. Volunteer for anything and everything, regardless if you are interested in it or not. The reason that I say this is because you’ll be surprised that some of these events that we often overlook can have the ability to ignite a spark that fuels our passion.