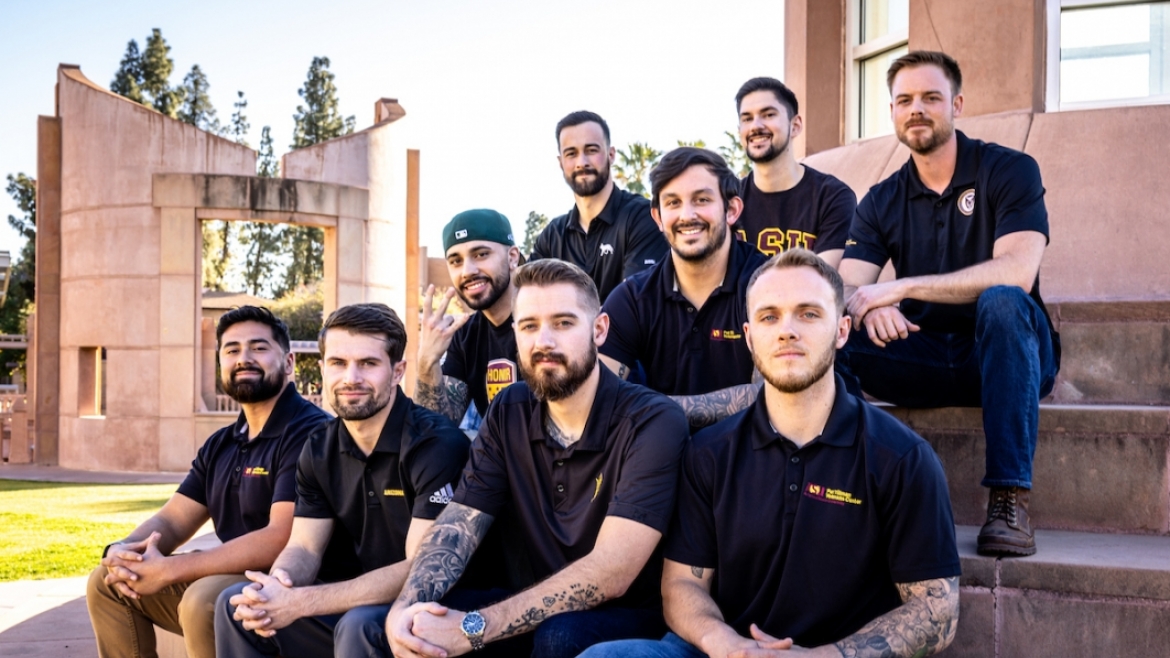 Transitioning to college and making it to graduation years later can be tough, especially for those leaving the military, but nine Arizona State University students who became friends in the Marine Corps figured out the key to success — each other.

They first met in the harshness of the Mojave Desert in 2016 during what the Marine Corps calls an Integrated Training Exercise, designed to get Marines combat-ready and sharpen their occupational skills.

“That was 45 days straight out there, without a bed,” says Grant Bushman, who is finishing his master’s degree in emergency management and homeland security at ASU. “That’s where a lot of us got to know each other. You just went 45 days sleeping on the ground next to the guy. That was, like, by far the worst… I guess the worst, but the most bonding thing we’ve done.”

The bond forged in the Mojave grew as the years went by while they were all assigned to the same unit — Combat Logistics Battalion 7 at Marine Corps Air Ground Combat Center Twentynine Palms, California. Weekend trips to Phoenix gave them reprieve from Marine life and introduced the group to Arizona, said Bushman, who is from Los Angeles. He had civilian friends in Phoenix who housed the "Devil DogsDevil Dog is a nickname for a United States Marine coined during World War I." during their visits.

“Being at Twentynine Palms, and how miserable it was at times, made us grow together,” Bushman said. “We had a lot of fun too, though.”

Not having much to do after work at Twentynine Palms was part of the misery, Devon Cristales says.

“When I learned of my assignment there, I pulled up Google Maps and noticed there’s literally nothing around it; nothing for miles,” says Cristales, who graduated from ASU in May with a bachelor’s degree in management and now works for financial management giant Vanguard. “There’s not much to do during the week besides go to work, get off work and hang out in the barracks. Literally, every Friday as soon as we got off work at 4:30, we were gone … going to San Diego, LA, Las Vegas, Palm Springs and here (Phoenix).”

Nevertheless, the stint in the Marines was valuable for them. It gave some, like Daniel Melendez, direction. A history major set to graduate in spring 2023, Melendez went to community college in Virginia for a year after high school but said he wasn’t mature enough then.

“I was failing, and not going to class,” says Melendez, whose parents came to the U.S. after fleeing El Salvador’s civil war in the 1980’s. “I felt guilty about it because my parents were paying for it.

“I stopped going to school, and for a year and a half to two years I was just working. … I kind of felt my life was stagnant; I wasn’t progressing. That was part of the reason I went to the recruiting station.”

Melendez flourished as a Marine, earning multiple awards, and was promoted to sergeant by the time his four-year enlistment was up.

“It was really good for me, in terms of learning what I wanted out of life and the kind of person I want to be,” says Melendez, who wants to be a teacher. 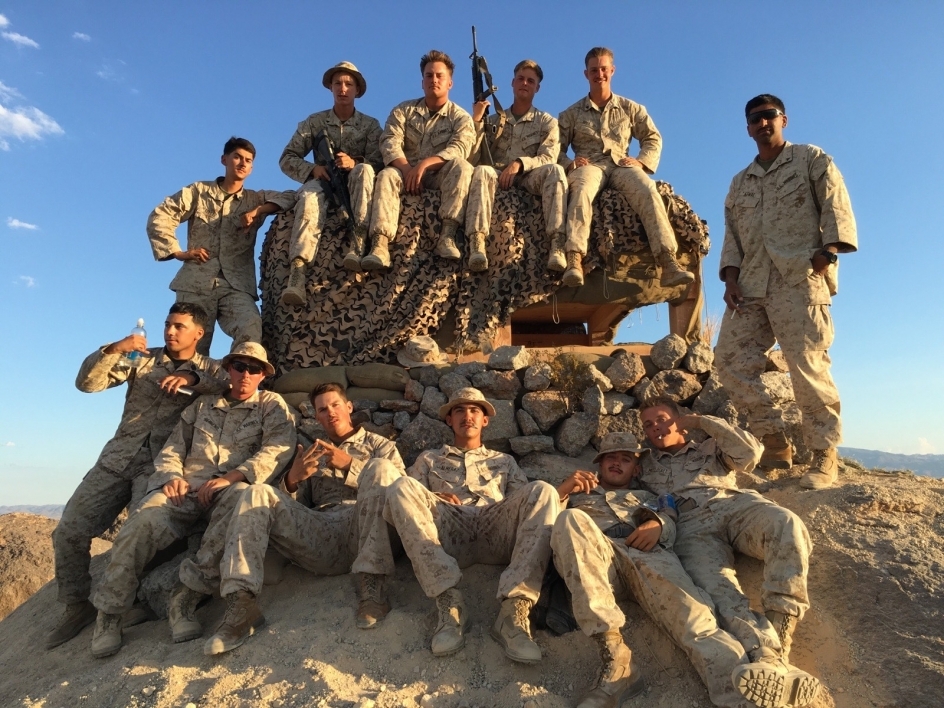 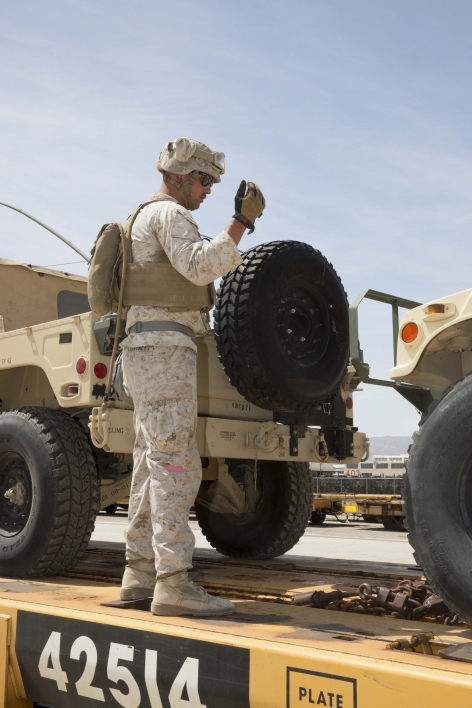 Devon Cristales, then a Marine corporal with Combat Logistics Battalion 7, guides a Humvee onto a rail car while participating in rail operations training at Marine Corps Logistics Base Barstow, California, June 2016. Cristales graduated from ASU in May and now works as an advance to financial planning associate at Vanguard in Plano, Texas, a Dallas suburb. 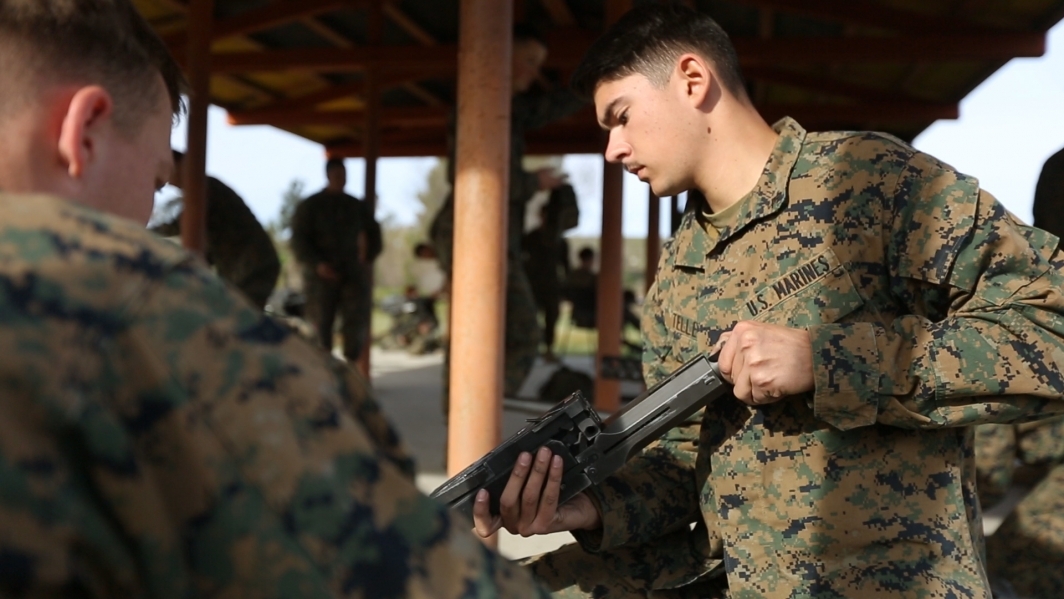 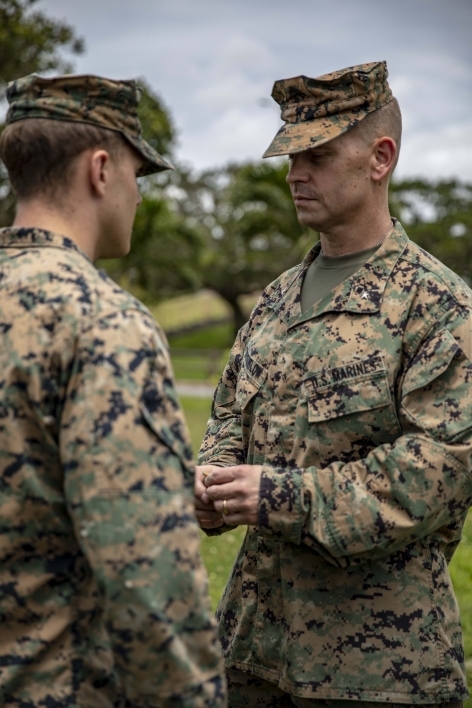 Ryan McCloskey, then a Marine Corps sergeant, receives a Navy and Marine Corps Achievement Medal from Marine Brig. Gen. Keith D. Reventlow during an awards ceremony to conclude a military exercise in May 2019 at Camp Foster, Okinawa, Japan. McCloskey studies electrical engineering at ASU and is expected to graduate in 2024. Veterans and ASU graduates Brandon Tellez (right), Devin McCord (left) and Devon Cristales (center) pose for a photo during the Veterans Honor Stole Ceremony organized by the Pat Tillman Veterans Center on May 7 in Tempe. The three are part of nine Marine veterans at ASU who served together in the same Marine Corps unit. 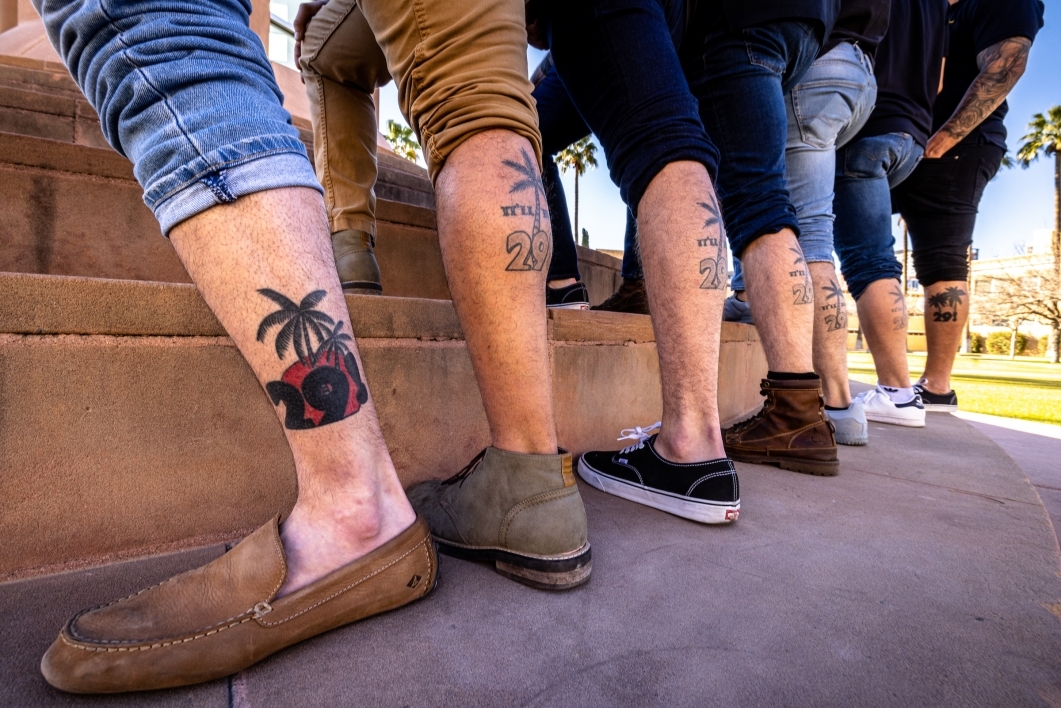 ASU Marine veterans who served in the same unit at Marine Corps Air Ground Combat Center Twentynine Palms, California, show their "29 Palms" tattoo during a portrait shoot on the Tempe campus in February.

Each of the nine friends were part of a larger group who often traveled in three carloads to Phoenix. One by one, they left the service after their contract expired. Three of them landed in Tempe, Arizona, first. Bushman, Jacob Moore and Mesa native Brandon Tellez started at ASU in 2018. Others went home first to figure out next steps.

“I kind of already wanted to come out here (to Phoenix) when I got out, but my family... I missed them, and my friends,” says Melendez, who grew up in Warrenton, Virginia.

Going home was good at first for Melendez, but eventually the joy fizzled.

“I wasn’t having a good time. I was pretty depressed,” Melendez says. “I decided to come out here (to Phoenix) in June 2020.”

Those who were already in the Valley talked the others into joining them. By fall of 2020, all were in Tempe, together again — Bushman, Moore, Tellez, Melendez, Cristales, Edward Brady, Nicholas Burns, Ryan McCloskey and Devin McCord. They either became roommates or lived close to each other.

The nine see each other frequently, hang out every weekend and connect daily via cellphone group chat. They are also part of a separate, larger chat of former CLB 7 Marine buddies who now live elsewhere in the country. The group chats have become a source of support for all.

“We’ve got a group chat of probably 20 to 30 of us,” Bushman says. “We all keep good tabs on each other, making sure everybody is doing what they want to do and the best they can do for themselves. A few of the guys may still come down here to ASU.”

The group chats can be a lot of “stupid stuff,” Brady says. But they also serve a larger purpose.

“We bounce a lot of ideas off each other,” says Brady, who earned his ASU bachelor’s degree in criminology in 2021 and is on track to finish his master’s degree in emergency management and homeland security in December. “We’re all idiots, but we are all trying to figure out where we are going.”

When service members leave the military, they can find themselves lost and emotionally empty, Brady says.

“You’re alone. You spend four years making the best friends of your life, essentially your new family,” says Brady, who is from Cleveland, “and then for whatever reason, you get out and get back to your old life. But that’s not who you are anymore. We’re all just honest with ourselves, saying, ‘Hey, I want to be back with my buddies.’ Why not Arizona State? Perfect place.

“It’s not like we are going off doing nothing, wanting to just party with my buddies. No. I just want to be back with my family again.”

This “family” of Marine brothers provides needed camaraderie and friendship, and also supports their academic journey. If one of them struggles, the others help.

“We’ll be like ‘Hey, you need to step it up a little bit.' Or, 'What do you need help on?'” Bushman says. “We have a whole wide range of knowledge. Some guys are good at writing, for example. We kind of tutor each other a bit.”

The camaraderie, support and sense of family built in the Marine Corps is something the group believes can be helpful if the service can leverage it to help those transitioning out. Brady and Cristales were part of the Veterans Scholars Program, and in that role, as part of a project, they analyzed how to transition people out of the military to give them the best shot at success.

“It’s a pipe dream, but it would be cool to create something, even if it’s a social media thing advising service members,” Brady says. “Telling them to find one buddy who is getting out at the same time, (and) ask, ‘You want to go to college? Yeah, let’s pick some place. Let’s pick some place fun, like ASU. Let’s be roommates.’

"We got lucky because we all figured it out.”

With six of the original nine buddies already holding ASU degrees, and with two now in full-time careers after graduating, their longing to hang on to their second Marine family is paying off. All are set to finish at ASU by 2024, thanks in part to their drive and the support system that grew organically from the friendship born years ago in the Mojave Desert.

“We are all our emotional support dogs,” Brady says.

Editor's note: This story is part of our Salute to Service coverage, Nov. 1–11. Learn about the schedule of events. For Gil Ruiz, the path to a college degree was not always straightforward. But thanks to Arizona State University’s Pathways for the Future program, the single father and military veteran is now one semester away from graduating with a Bachelor of Science in engineering (roboti...

For Gil Ruiz, the path to a college degree was not always straightforward. But thanks to Arizona State University’s Pathways for the Future program, the single father and military veteran is now one semester away from graduating with a Bachelor of Science in engineering (robotics) from the Ira A. Fulton Schools of Engineering. 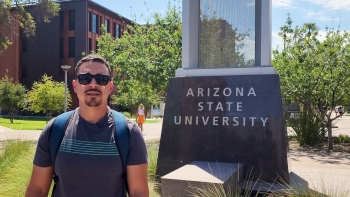 Ruiz, an out-of-state transfer student, and other transfer students and former military service members like him are finding that ASU resources like the Pathways program and MyPath2ASU are helping them achieve academic success, not only by providing financial assistance, but also by allowing them to spend more time pursuing education and building professional networks.

“By helping me financially, that Pathways scholarship has allowed me to focus on my academics,” Ruiz said. “I'm a single father, and I work. Had it not been for the Pathways for the Future program, I’d probably have to get another part-time job. Now, I can just focus on hitting the books (and) on keeping my GPA up, which I'm super stoked about!”

Both Pathways for the Future and MyPath2ASU offer comprehensive support to students looking to transfer to ASU, wherever they may be in their academic journey. They also provide invaluable mentorship.

“Pathways is a resource for me not just financially, but for the mentorship they provide as well,” Ruiz said. “My current mentor has been very helpful with building my own professional network and helping me with building resumes the way that engineering companies want to see them.”

Pathways for the Future helps students develop connections between their peers, faculty, mentors and employers that enable lifelong learning and the skills needed to thrive in the workforce of the future. For qualified students, financial assistance is available while in the program, including help with any surprise costs or expenses.

“I even had a situation where I had to use emergency funding, and Pathways was right there to provide me with what I needed when I needed it,” Ruiz said. “I've never had any issues with anything that would keep me from continuing my education since day one, applying to ASU, until now, close to graduation.”

The Pathways for the Future scholarship and MyPath2ASU are designed to further ease the transition to ASU for transfer students like Ruiz.

“These days, people find it difficult to find the right resources for school, especially veterans,” said Ruiz. “At ASU, I've never had to struggle with that. That's made life so much easier.”