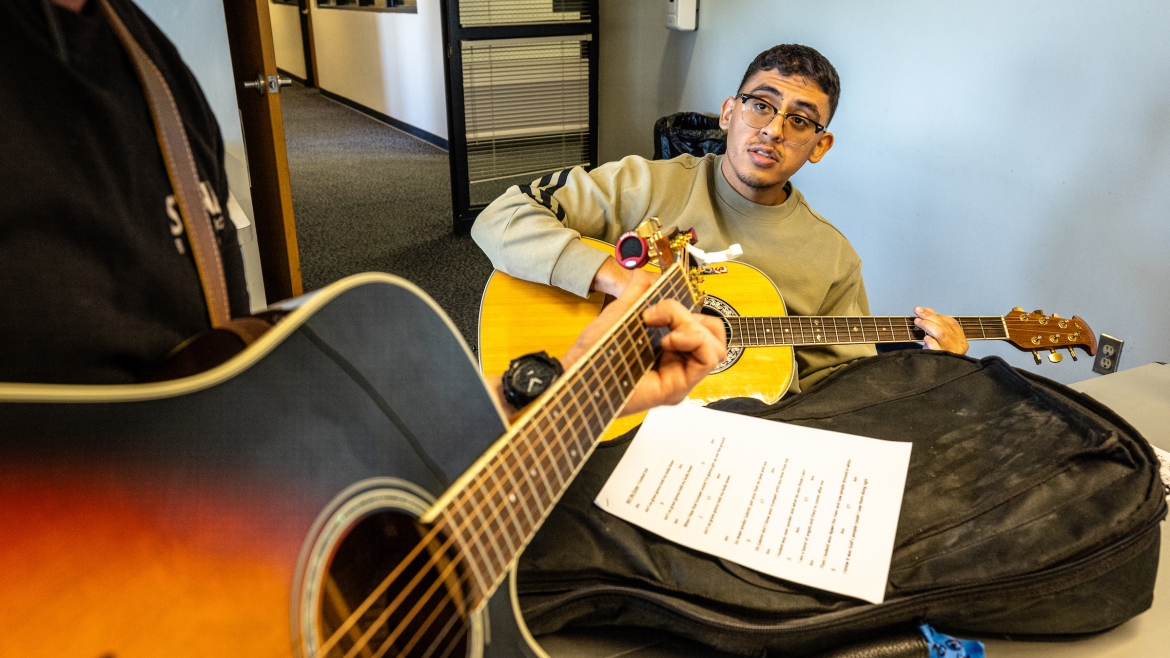 Music of the heart

Army veteran Stephen Bradford once held a skewed view of the world. He saw some “ungodly things in combat,” battled long-term addiction issues, had a marriage go sideways and attempted suicide three times.

“When I came back to the world after combat, I thought the world was messed up,” Bradford said. “But it was really me.”

That realization is what set him on the path toward healing and acceptance of the past. And while sobriety reset his life, it was a music program for veterans that soothed his soul.

Bradford is the lead instructor for the Phoenix-Tempe chapter of Guitars for Vets, a nonprofit organization that was founded in 2007 and has more than 100 chapters in more than 40 states. The program is dedicated to the healing power of music for veterans who are dealing with combat-related mental and emotional stress issues.

Guitars for Vets provides free guitar lessons, an acoustic guitar, needed accessories and a method book, in a structured program run by volunteers. To date, the national organization has given over 43,000 lessons and distributed more than 4,300 guitars to veterans.

Before he entered the military, Bradford was a fisherman and musician who played in a couple of heavy metal bands based in the West Valley. The bands played at talent shows and keg parties in the desert. It was mostly for laughs, good times and free beer. Then Bradford and a bandmate decided to join the Army.

His buddy only lasted a few months in the military. Bradford decided to stick it out and was trained as a Patriot missile operator during Operation Desert Storm. He said combat had a profound impact on him.

“I used to love things, but after I came back from combat, I had no pleasure in anything,” Bradford said. “I forgot how to play guitar and Guitars for Vets showed me how. They literally saved my life.”

Now Bradford is returning the favor. He has run the Phoenix-Tempe program, which is housed on the third floor of Arizona State University’s Community Services Building, for approximately two years.

He teaches, he counsels and he listens.

“There is active healing going on here on the third floor,” Bradford said. “This is distraction therapy. All that stress, all those nightmares, all that PTSD leaves once you come into this room. It builds confidence. It builds relationships. It’s a good program.”

Bradford starts with a song. He finds out from each veteran what their favorite tune is. Then that person learns that song, along with a handful of others, like Bob Dylan’s “Knockin’ on Heaven’s Door,” The Marshall Tucker Band’s “Can’t You See” and Peter, Paul and Mary’s “Leaving on a Jet Plane.”

At graduation, Bradford arranges for them to all perform live in concert at a local Veterans of Foreign Wars or other venue.

Most of the participants have some sort of musical background, but there are a few, like Sonia Carrasco and Steven Chacon, who have never played an instrument before. Carrasco, an Army veteran who served from 2011 to 2014, thought learning the guitar would be a nice way to spice up her social life.

“It’s good for almost any situation, like camping or a get-together,” said Carrasco, who works at ASU’s Pat Tillman Veterans Center as a student success advocate. “It could also come in handy for a romantic evening or singing a song to my mom on Mother’s Day. I think it’s a unique skill to have.”

Chacon, who is currently a cybersecurity specialist in the Air Force and a sustainability major at ASU, said for him it was about seizing a good opportunity and having camaraderie with fellow veterans.

“We all have different backgrounds and are different ages,” said Chacon, who practices about an hour a day. “It’s a fun and welcoming environment and there’s a great support system in place. It’s not an experience I might get on campus.”

Chacon usually sits next to Marko Higuera, a Marine. Higuera said he likes the program because it’s a form of self-expression.

“I’m 26 years old, so I feel like I’m barely learning how to deal with my personal issues or how to successfully express myself,” said Higuera, a supply chain management major in the W. P. Carey School of Business. “For the first time in my life, I’m able to sit down and focus on one thing for an extended period of time. When you’re in the military, you’re focused on the task at hand, which wasn’t really about you.” 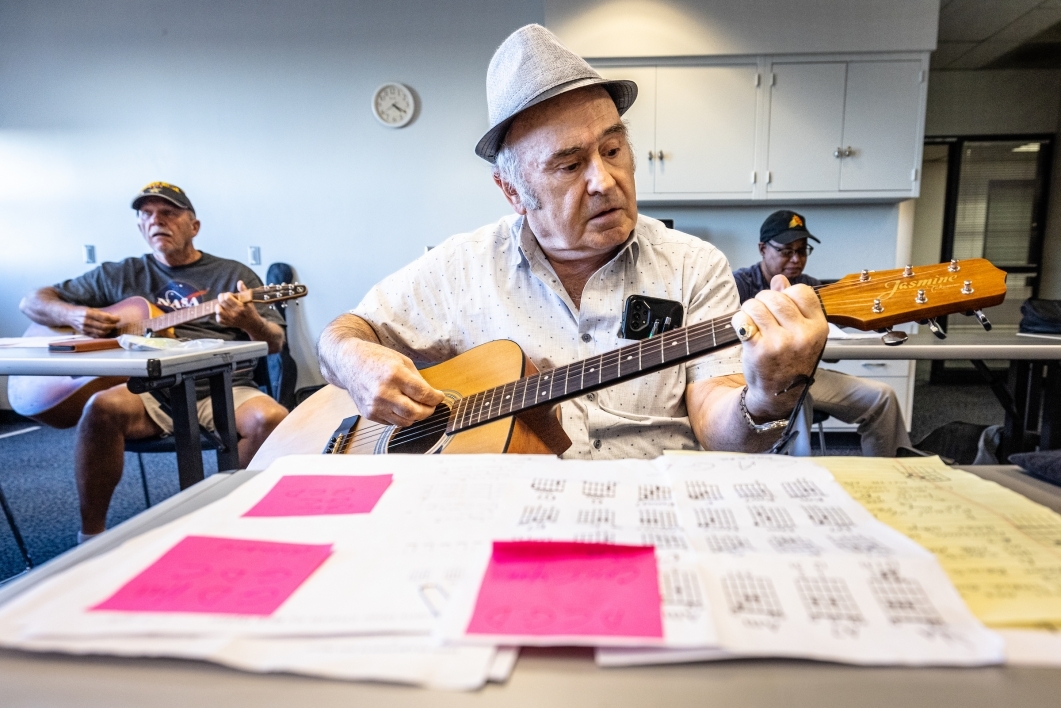 Army vet Gene Bouzek plays a three-chord progression with others at the Guitars for Vets group lesson on Oct. 27 at the ASU Community Services Building in Tempe. 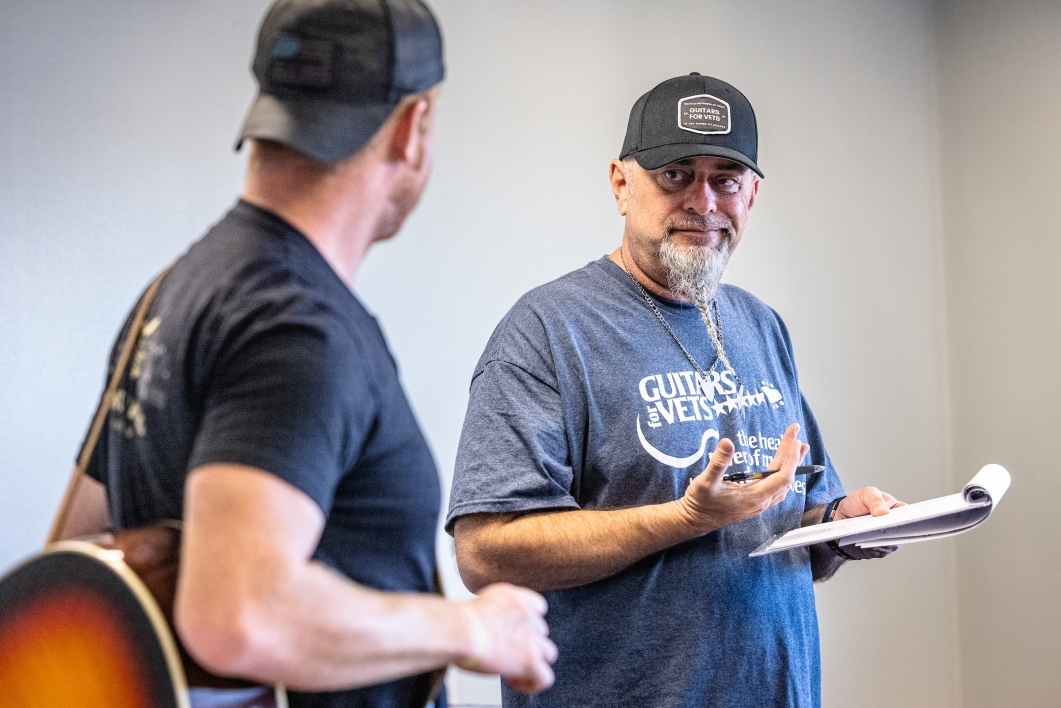 Army vet and local Guitars for Vets chapter leader Stephen Bradford talks with guitar instructor Josh Shockey about the song the group is learning during a lesson on Oct. 27. 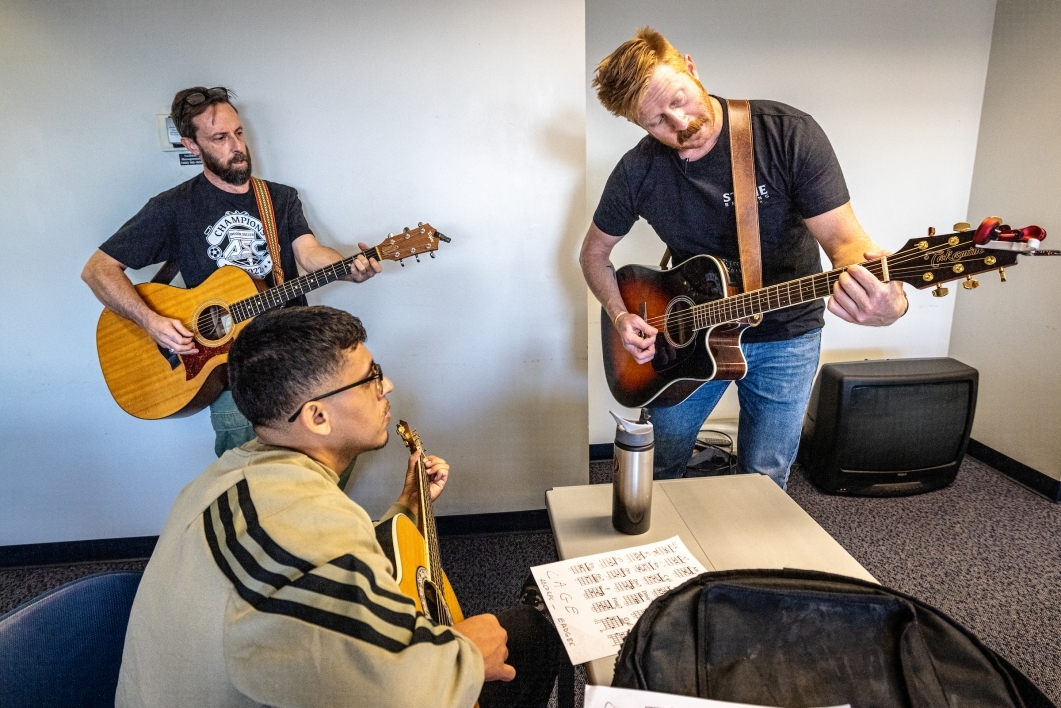 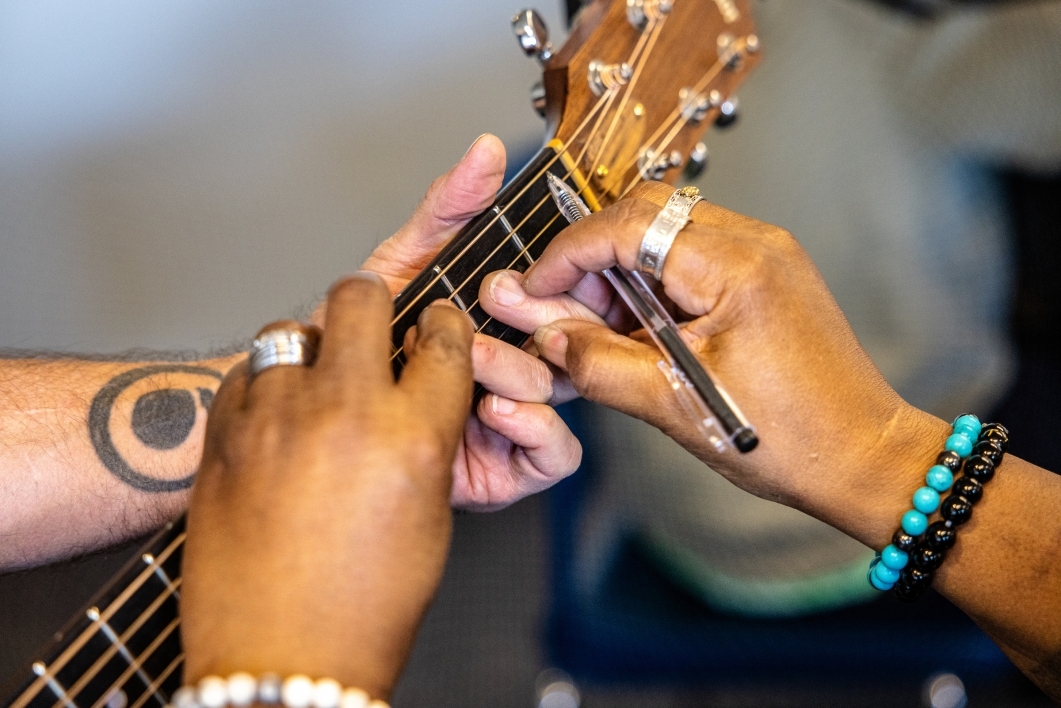 Veterans range in age from the Vietnam era to current military service. They are usually funneled into the program through ASU’s Office for Veteran and Military Academic Engagement, which sponsors Guitars for Vets, the Pat Tillman Veterans Center or the Veterans Administration in Phoenix.

The latter is courtesy of Teresa Hauguel, a volunteer with the Phoenix VA, an Army veteran and ASU alumna, who has PTSD. Hauguel met Bradford at the VA. Even though Hauguel doesn’t play an instrument, she brings veterans to the program and cheers them on each week.

“I suffer from military sexual trauma and my mental health was deteriorating,” said Hauguel, a former broadcast journalist for the American Forces Network. “If you don’t treat post-traumatic stress, it gets worse over time. So, I come, sing, laugh and have meaning in my life now. I wanna feel good about myself and cause change in this world.”

Gene Bonzek, a 75-year-old Vietnam veteran, said he was distracted by working and raising a family in the immediate aftermath of the war. When his wife passed away a few years ago, which coincided with his retirement, it gave him a lot of time to think. He said his PTSD began to slowly creep back into his life and he decided to do something about it.

“I like this program because we’re a team, a group, all working together. And you’re conversing a little more. There’s camaraderie, more trust,” said Bonzek, a Chicago-area native.

Trust is also a big issue to Mike Nemoli, who was a musician before he served in the Air Force from 1979 to 1985.

“I wanted to get involved with a music program because when you suffer from depression, you find yourself staying away from people," he said. "There’s more of a connection with veterans because everyone’s in the same boat. And when you’re playing music, you’re away from all of this crap that’s going on in your mind. It quells you.”

And that’s music to Bradford’s ears.

“I’ve seen and witnessed how music gives everyone joy and pleasure; it releases endorphins and stuff and makes us all feel good.” Bradford said. “Music heals.”

THE GAME -  Sun Devil Football heads back on the road this weekend, trekking to the Pacific Northwest to square off with Washington State on Saturday, Nov. 12 at Martin Stadium in Pullman, Wash. The game is scheduled for a 1:30 p.m. AZT kickoff/12:30 p.m. locally  and will be broadcast nationally on the Pac-12 Network (Roxy Bernstein and Lincoln Kennedy on the call) and will be carried over the... THE GAME -  Sun Devil Football heads back on the road this weekend, trekking to the Pacific Northwest to square off with Washington State on Saturday, Nov. 12 at Martin Stadium in Pullman, Wash. The game is scheduled for a 1:30 p.m. AZT kickoff/12:30 p.m. locally  and will be broadcast nationally on the Pac-12 Network (Roxy Bernstein and Lincoln Kennedy on the call) and will be carried over the airwaves on Arizona Sports 98.7 FM (Tim Healey, Jeff Van Raaphorst, Kevin Turner).