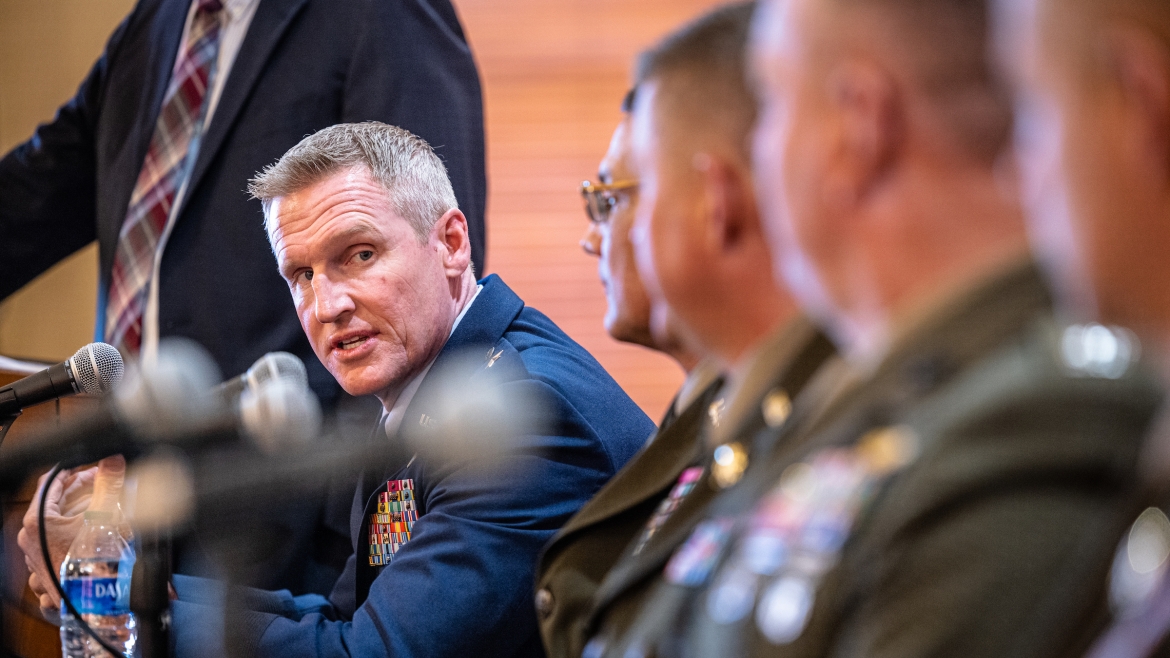 ASU’s Office of University Affairs hosts panel on space, cyberspace as part of Salute to Service

Historically, wars have been fought by soldiers on the ground, at sea or in the air. Future conflict may be different.

Access to space enables our military to surveil our adversaries through satellites and rapid intelligence collection. That means new servicemembers not only have to be competent in traditional warfare but also understand the new domains of space and cyberspace, according to a group of Arizona military leaders who assembled Friday at Old Main on the Tempe campus as part of Arizona State University’s Salute to Service.

Rueschhoff’s comment was made during a panel discussion on how the military is adapting to a new type of warfare, and their recruitment efforts for tech and talent.

“We house the ROTC and military units here at ASU, and technically, we’re the home of those programs, and we’re very proud to do that,” Kenney said. “It’s an outstanding opportunity at ASU to meet these top military leaders. ASU routinely brings top leadership speakers and scholars from around the world, and this is just one more opportunity on a special weekend where we are celebrating and honoring the service of everything military.”

The Office of University Affairs sponsored the event, which drew about 100 people, many of them ASU’s ROTC members, veterans and university staff. Titled “How Are Military Services Adapting to New Domains of Warfare, Specifically Cyber and Space?”, the goal of the panel was to discuss how warfare is rapidly changing, airspace competition, and recruitment and retention of military personnel.

The panel stated the military must expand its approach to recruitment compared to the past. That means actively combing colleges and universities for students with degrees in engineering, planning, geographical sciences, and computer sciences and technology. And they are trying to snap them up quickly.

“Recruiting is the challenge because there’s a lot of great opportunities (for graduates) on the outside,” Dudik said. “We need to think things differently going forward.”

Ives said that it takes two to three years for soldiers to become fully trained cyber operators. By the time they’re eligible for separation from service, Silicon Valley is waiting for them with lucrative offers. However, more recently, he said the military has been granted authority to extend retention bonuses in the six figures.

“We’re now authorized to pay people market prices who have done all of that training,” Ives said. “It’s the equivalent if they were a vice president of a small Silicon Valley company.” He added that, depending on the qualifications needs of the military, these retention bonuses can range from $175,000 to $225,000.

And they’re worth every penny as America competes with China, Russia, South America and India for airspace dominance. Staying ahead of our adversaries means constant self-evaluation, said Moreland.

“It’s a constant relook and revamp and evolution,” Moreland said. “That’s something that takes a lot more effort in order to stay ahead. … I think that all adds up to how we focus as a service.”

Panel members stated with all the talk of technology, the military’s focus should always remain on its people. They should exhibit many qualities, including leadership, integrity and a touch of humility, panelists agreed.

“If you’re humble, your men will listen to you, and they’ll follow you because they trust you,” Sandison said. “You have to constantly find a way to make yourself a little better each day.”

But what it really boils down to is attitude, aptitude and ability, said Rueschhoff.

“Ultimately, we are recruiting human talent. We want people who are both good at what they do and even enjoy what they do,” Rueschhoff said. “Writ large, this scares the hell out of anyone who would think of raising a fist against us.”

Top photo: Brig. Gen. Jason Rueschhoff looks over his shoulder at fellow Arizona military leaders for a panel discussion titled "How Are Military Services Adapting to New Domains of Warfare, Specifically Cyber and Space?" The Nov. 4 panel was hosted by ASU's Office of University Affairs for Salute to Service week. Photo by Charlie Leight/ASU News